Here’s our fantasy premier league forwards GW27 article where we give our forward player rankings for GW27. There’s a table of information and discussion on some players of interest

The first schedule ranks players by their NON penalty underlying stats and expected assists converted to FPL points in GW1-26 . Those who have taken penalties or are expected to be the penalty taker have an * next to their name

There’s also anytime goalscorer odds.  There are none for the 2nd game.

Player values and PPMs are as of Wednesday 3rd  March and before Wednesdays games.

Here is the link to the google spreadsheet. You can go to file>make a copy and then sort it how you like.  700 mins needed to qualify.  Underlying Stats are from the free site understat.com 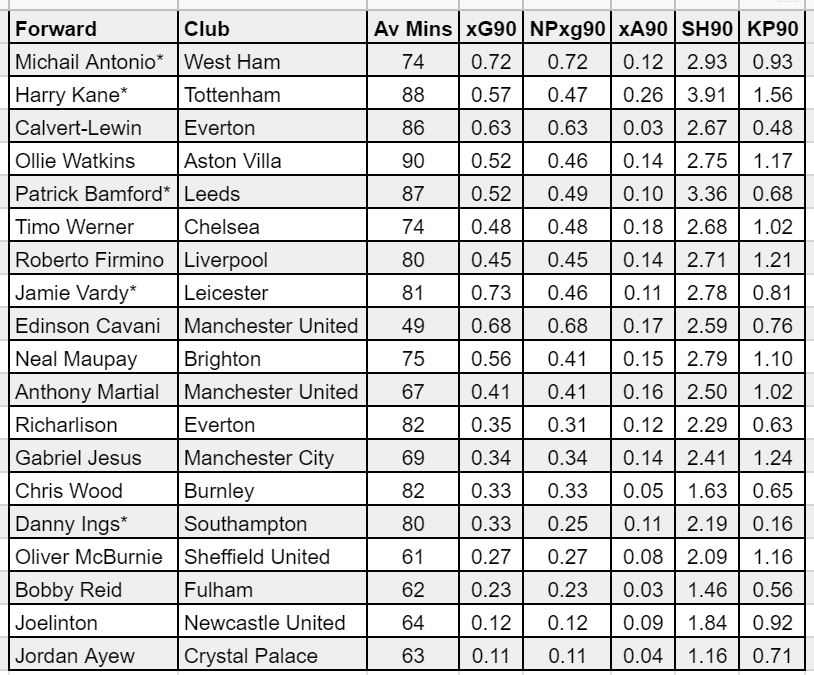 Antonio’s underlying stats this season are nothing short of astonishing.  Aguero would be pleased with these stats.  They also aren’t that dissimilar to last season so it’s not as if they aren’t sustainable.  Injury is always a risk but probably the worst negative is his finishing.  He’s underperforming his xG as he did last season.  Hence the 4.6 PPM.  Leeds next is a great entry point though

Has a fixture in BGW29 plus a match v Southampton to be rearranged.

Has everything except an attack minded manager (although Mourinho would refute this obviously).  Great returns, great underlying volumes, has pens, assists and scores.  I’d like his NPxG to be better but you really can’t complain.

Has a BGW29 plus a match v Everton to be rearranged.

Has lost his way in the last 3 with just 1 assist and some pretty ordinary underlying stats.  Could be the Brighton defence and 2 games without Grealish.  Season has been very good but like Antonio under shooting his xG with no history to say if this has been an issue before

Form has been very hit and miss in the last 10 and that’s even affecting his volumes.  A bit concerning

Has no fixtures in BGW29

It’s a good thing he has pens because his underlying stats without them aren’t anything great.  That’s never really been a problem as pens and lethal finishing have helped him to very good returns.  They could still but at the moment he looks pretty ordinary for the price if  these 2 pick me ups don’t appear on the horizon.  Not having the injured Barnes and Maddison certainly wont help.

Has a fixture in BGW29

Followed his 2 goal start v Everton with 3 blanks although the underlying stats are very good, albeit way above anything he’s done before in a team that’s 13th for non penalty xG.

Has no fixture in BGW29

Started with a goal and 2 assists in his first 6 games for WBA.  Has a good xG total, albeit on 470 minutes.  Volumes though are very poor which probably isn’t a surprise for the team with the worst total NPxG

Season ranks are in brackets before their name 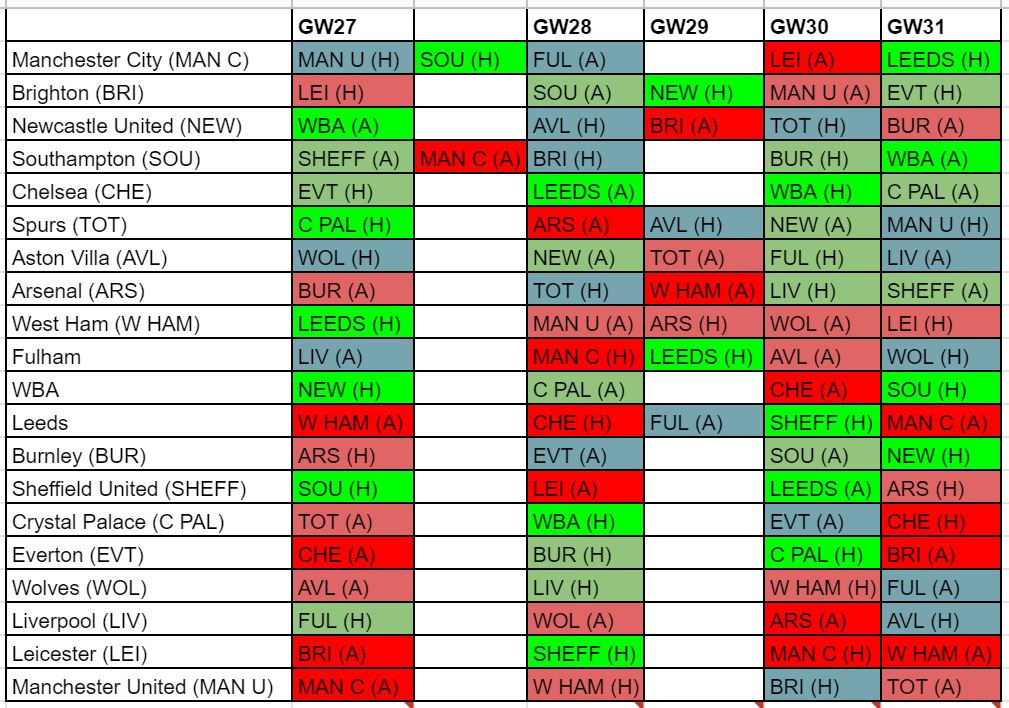