Here’s our fantasy premier league forwards GW29 article where we give our forward player rankings for GW29. There’s a table of information and discussion on some players of interest

The form gives their ranking from the season/last 10 gameweeks/ last 5 gameweeks.  I’ve put them in seperate columns so they are sortable.  Note I have not completed this for GW29

Player values and PPMs are as of Wednesday 17th  March

Here is the link to the google spreadsheet. You can go to file>make a copy and then sort it how you like.  360 mins needed to qualify.  Underlying Stats are from the free site understat.com 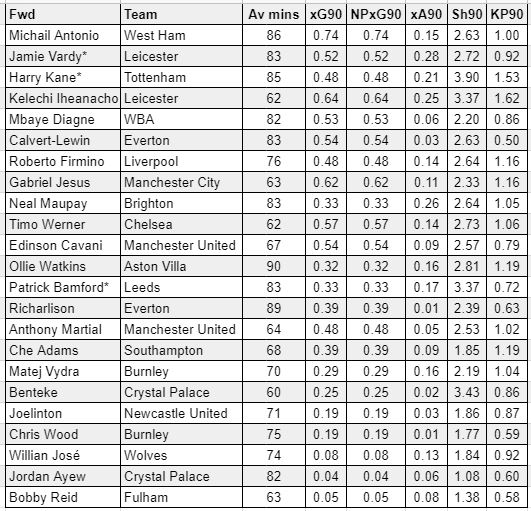 A few comments on players with fixtures in GW29

Producing great underlying stats and 2 goals in his last 4 isn’t to be sniffed at.  Does have tricky fixtures though going forward apart from Newcastle in GW32 though.  Seems to be behind the pecking order for pens unfortunately

Did his best in GW28 v Arsenal despite a lack of service and a fairly negative team attitude to start with.  Even allowing for that he still managed a disallowed goal, hitting the post and 3 shots.  The obvious captain favourite and has penalty duties.  How he will manage in GW29 and going forward if Son is out for a while remains to be seen.  Fixtures are mixed and he has a blank fixture in GW33 for he EFL Cup final.  Has a fixture v Southamptn still to be arranged which should give a double gameweek

Has really struggled to put the ball in the net this season, much like his Brighton colleagues, and his underlying stats have dropped as well in the last 10 gameweeks and it’s only 1 assist and no goals in his last 9 games.  Fixture is great in GW29 v Newcastle but then pretty mixed until Sheff Utd in GW33.

Another player who has struggled to put the ball in the net this season and is underperforming his xG.  Like Maupay we seens a drop off of his underlying stats in the last 10 compared to his season stats.  2 assists and no goals in his last 6 is his current form.  A hard to predict fixture v Spurs in GW29 but does have Fulham in 30 and WBA in 33 to look forward to

A similar story to the 2 above in that we have seen  drop off in underlying stats in the last 10 compared to his season overall.  His recent form is also questionable with 1 goal in his last 6. He’s also an injury doubt for GW29.  Has Sheffield Utd in GW30 though and then it gets far tougher

Note probably the trickiest to leave out were Maja who was ranked 5th as he was left out in GW28 v Man City and Lacazette who has only started 2 of the last 5.  He was ranked 19th but was hindered by sub appearances reducing his average minutes. 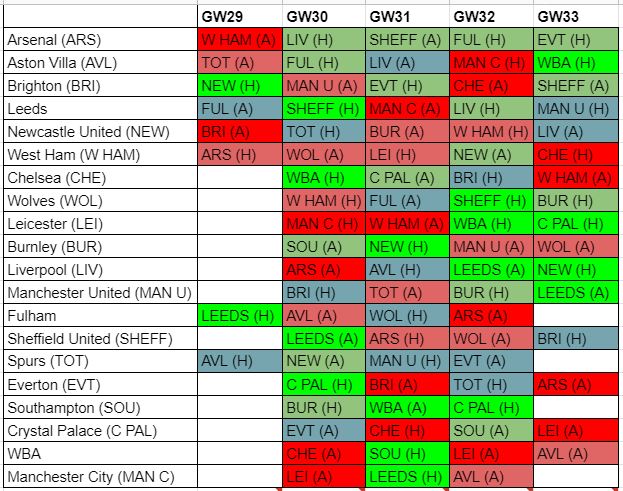