Reasonable week, slightly better than last weeks 75. My four point hit for Vardy broke even over the three games vs Kane, so nothing lost in the end! My Jota transfer last week was wasted and will cost me four points to move him on, as this is my opportunity to get in Fernandes. So plan is Vardy to Bamford and Jota to Fernandes – I’ve got 0.2m to play with, but might move early anyway as I’d prefer to maximise team value if taking a hit. I’m then left with two decisions:
1. benching Adams or Soucek, currently benching Soucek.
2. then captain either Fernandes or KDB, currently going for Fernandes.

Transfer summary:  Vardy out to Bamford in and Jota out to Fernandes in

Here’s the team prior to transfers being made:

After 5 consecutive green arrows taking me from almost 3m to 306k I eventually came crashing down with an 80kish red arrow with 55 points (4 points above the overall average). Over the 6 weeks I’m still happy. These sorts of weeks were bound to come.

My transfers of Vardy/Son to Salah/Wilson did not go well with Vardy returning a double digit haul to punish me in addition to Son’s assist. I was never comfortable taking out 2 good assets like this, but I wanted Salah for captain options over the next few and over those games I’m hoping it pays off. Martinez’s 11 pointer really saved me this week, and captain Salah at least returned (albeit fortuitously) but De Bruyne/Fernandes both blanking in a drab 0-0 did me no favours. My only other returns came from an assist a piece from Bamford and Calvert Lewin and a Southampton clean sheet. Soucek’s points remained on my bench.

My team looks in good shape this week and De Bruyne/Bruno have great fixtures so hoping the combination will help me to green arrows. My fixtures are generally quite favourable too so I’ll certainly be rolling the transfer and hoping to get back to greens this week. My only dilemma is De Bruyne or Bruno captain. It’s currently on De Bruyne but Bruno’s away form when playing against SHU away is very tempting, and as the much higher owned player is less dangerous. 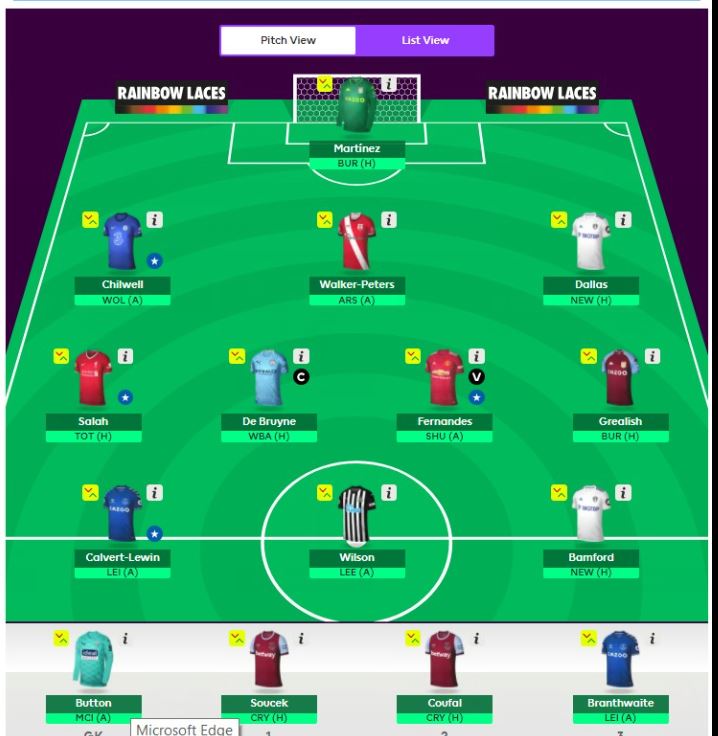 Kev has yet to use any of his chips

Quick turnaround this week so wanted to make sure I was on top of things. Finished this article early and completed my transfers early too.

My plan was to get Grealish back in with my two free transfers somehow. I figured it would likely have to involve downgrading Jesus in order to upgrade Soucek. I also figured I could wait a week to do it without a hit, Jack played Wolves away, which isn’t a great fixture.

However, Jota getting injured changed my plans and instead I moved him to Grealish. Instead of selling Jesus, I figured I would roll the dice on hoping he starts vs West Brom and instead sold Che Adams down to Brewster. Adams had a nice week for me but plays Arsenal and City now so I’d rather sell him. I made the moves Friday before Grealish went up.

This also leaves me with 0.7M in the bank, which will be nice as I plan on trying to get a bit more aggressive with some transfers until my wild card in GW16.

The captain is supposed to be on KDB this week and 99% will be. I must say that I am not confident that he will start this match. They played Satruday and play on Tuesday. Pep only used one sub so there is a real risk that instead of rotating player minutes he is going to rotate full player games all together to give them proper rests. KDB starting on the bench and not being needed is a real possibility against West Brom in my opinion.

Bruno played Saturday as well and does not play Sheffield Utd until Thursday. That is a pretty big time difference to KDB. The Blades are thought of as a decent defense but have allowed 21 goals this season. West Brom has allowed more with 25 but they let in 5 twice with only 10 men. Take those two games out and I’m not sure they are that much worse than the Blades defensively. It’s close. Also….it’s an away game for Bruno. That’s supposed to be a good thing I’m told as he has never blanked in away game for MUN. The stats there are actually pretty unreal. He does have gametime risk here too though. So whoever I go for, I will put the VC on Mo, as that is a must start game for him. The last thing I need is for both Bruno and KDB to be rested while I have the cap and vice on them! 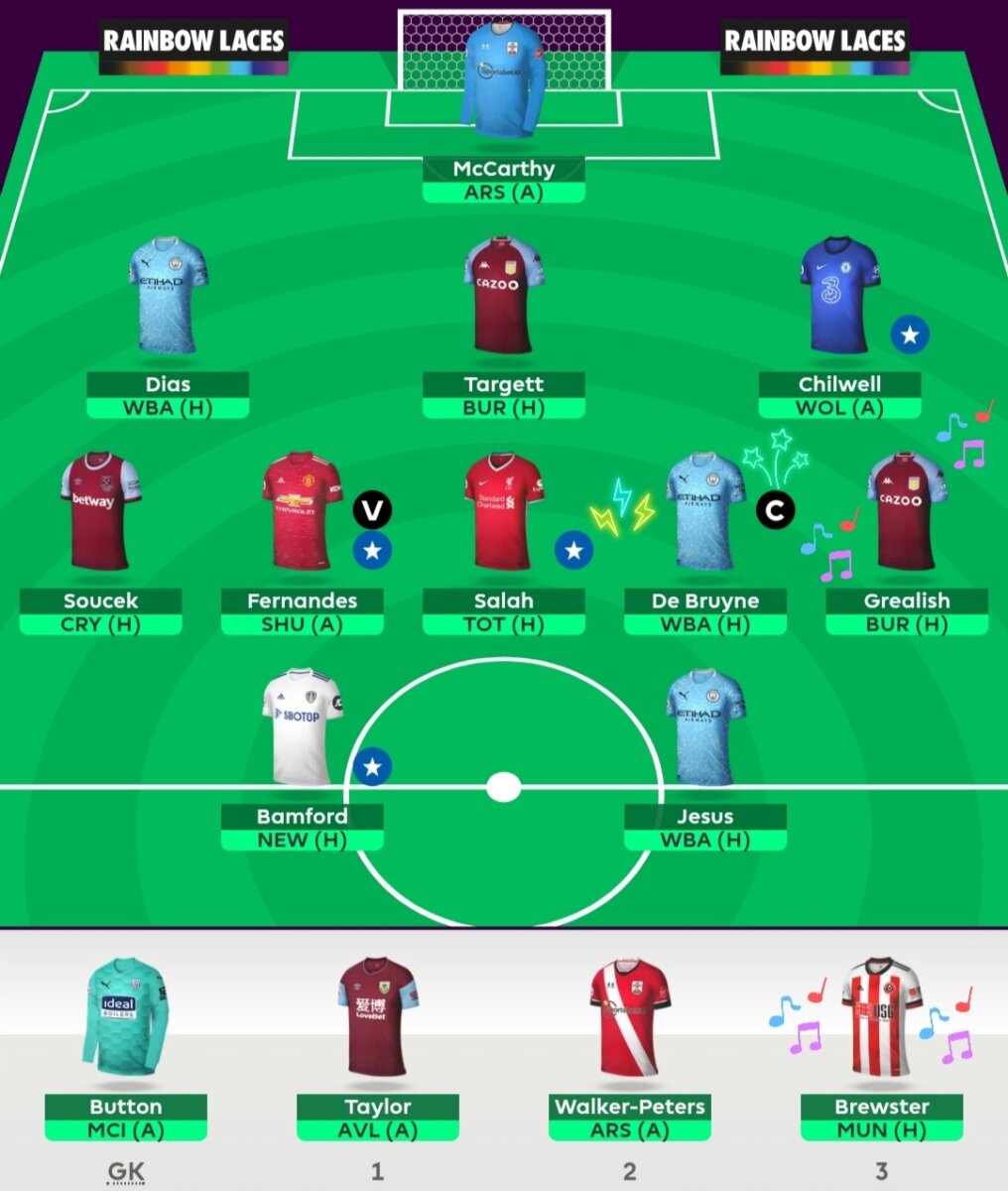 What a season this has been so far, everything I do seems to wrong 😆😂 oh well. It is what it is although with my style of I’d expect more rank movement. I have never broken the 500k mark nor have I been over 2mil and 8 of the 12 GWs so far I have been between 550-700k. Its like running on the spot.

191k red arrow this week which could have been far far worse. All my premiums blanked Sterling KDB Bruno and Werner C and all premiums I dont own returned Salah Kane Son and Vardy. If it wasn’t for the 20 points of Martinez and Soucek I think I would have been over the 1mil.

I made them before the arsenal game and hence I might play with 10 men this week due to bellerin booking. 2 FTs and it was Werner (had enoughhhhhh he can and score 4 goals now and i wouldn’t mind) Wilson comes in for 2 nice gameweeks. He will then make way for either Wood or Antonio if fit. Second free transfer was Soucek to Son. Son has hurt me the worse during these 2 gameweeks and even with Liverpool away I had to get him in.

The Sterling to Salah move will happen eventually to give me my season keeping midfield 5 of Grealish KDB Salah Bruno and Son but it wont happen this week. Salah owners were sooo lucky this gameweek and I prefer sterling home to WBA than Salah home to Spurs. Park that bus Jose pleaseeee.

I might actually make this move in gw 15 or 16. Sterling has WBA home, Saints away, Newcastle home and Salah has Spurs home, Palace away and Wba home. If Sterling gets gametime and performs he stays for the Newcastle home fixture in gw15 as well.

Captain. I can name some players that have more ownership than Sterling – Neco Williams, Brewster, Mitrovic.. Shocking…. If I have confirmation that he starts then he is the C… Or else its KDB C

transfer summary:   Werner out and Wilson in.  Soucek out Son in 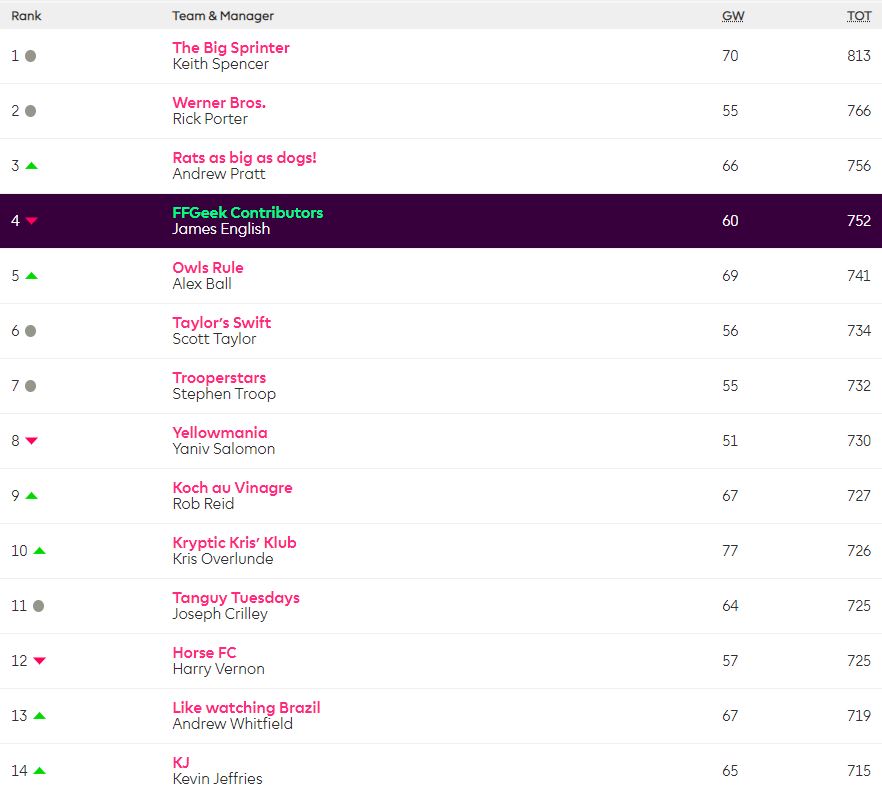 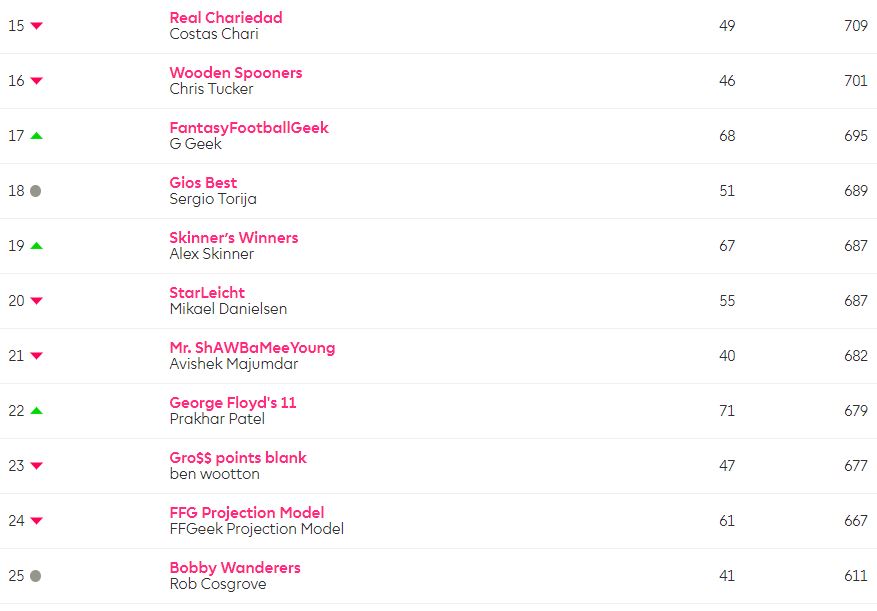