I’ll not talk too much about GW16 shall I?! A little bit of a bullet dodged I guess in that I only managed to get 10 players out with the 2 cancellations, lost out on 2 cleans sheets with the Taylor injury and Coufal not starting and only managed 4 returns with a Captain blank. Oh and I only had 1 player in the Leeds demolition of West Brom! Yep, a relatively mild 15k red could have been far, far worse.

Robertson was my star player this week, his 9 points versus Newcastle salvaging some pride and securing me a place in Round 1 of the FPL Cup. Bamford, Fernandes and Walker-Peters were the other returners – good work lads! Onto GW17 then with much to ponder moving forwards.

1FT and £2.0m in the bank. I’ve got Taylor flagged and likely out with a hamstring injury. Cancelo is also likely to be out as he’s rumoured to be one of City’s Covid positives so I’ve got some problems.

The plus side is that 2 fixtures have now been rearranged into GW18 & 19 – looking at it, this works out ok for me as I’ve now got 3 more double gameweek players for GW19. I have considered whether I could negotiate GW18 without my Free Hit – I have 6 players + the injured Taylor and 2 Free Transfers to play with, but I think the week still looks better as a Free hit option for me with the addition of the United game enhancing the pool of players for the week somewhat and raising the points ceiling. I also suspect a number of managers will now be happier going with 8 or 9 players so that gives me a head start on them too.

So for this week, it’s about trying to negotiate through and get a team out. Priority therefore I think is to sell the injured Charlie Taylor, bringing in a replacement double gameweek player in the process who hopefully also has some game-time security this week. I’m going to wait as late as possible to make this move (probably around 3.30pm on New Years Day I reckon) to gather as much information as I can. Likely candidates to come in are: Dallas, a Man United defender or Justin. I’m favouring the latter at the moment for his good fixture this week, but I’ll see if any other news comes out before committing.

Further forward, it’ll then be Free Hit in GW18 and then in GW19 I’ll likely bring in a second playing keeper for Forster and possibly take a minus 4 to change either Son or DCL for another double gameweeker which would give me a grand total of 14 double players.

For my captain this week, it’ll be Son versus Leeds – this looks like the kind of game that might suit the South Korean.

Good Luck this week folks – a very Happy Hogmanay to you and all the best for 2021!

transfer summary:  to be confirmed.  Possible Justin in for C Taylor

A pleasing week post-wildcard. A score of 63 has seen rise to a season high 141K. The news around the games going into 18 and 19 loses the edge on those that had WC16, FH18, BB19 planned but I’ll carry on with this plan. My move this week was planned to be Pope to Johnstone but after their 5-0 thrashing that doesn’t feel so great. With the Villa news, I’ll likely move Pope to Martinez this week (as FH18 means I’d lose a transfer if I don’t make one) and then move Son to De Bruyne for their now DGW19. I may also move Wood/Adams to Watkins for a -4 in 19 but I’ll decide about that later. 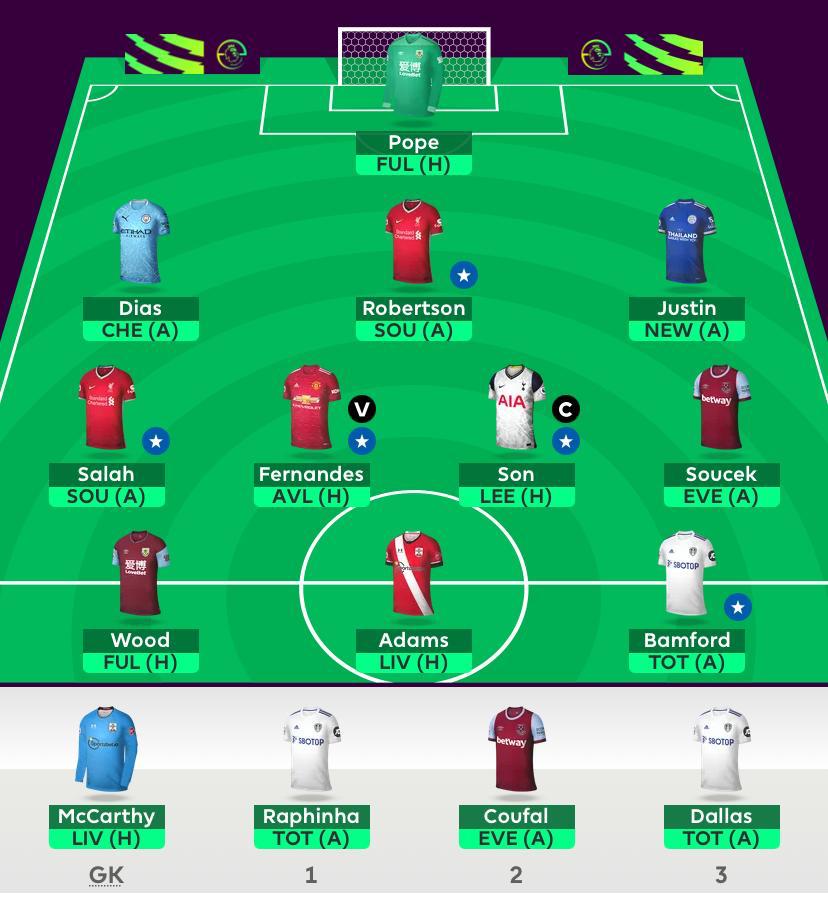 Lots to ponder now with the new MUN/BUR GW18 and MCI/AVL announcements have come out.

The Taylor injury is annoying but it is going to keep happening with so many games. This game isn’t easy. Will wait on news for a week I suppose.

If you make a transfer this week, I would focus on MUN. Wait till the deadline. Lets the 0.1’s go. They aren’t important right now. More information is more important.

If I don’t Free Hit I will probably swap Taylor to Lawton if injury news is confirmed in presser. 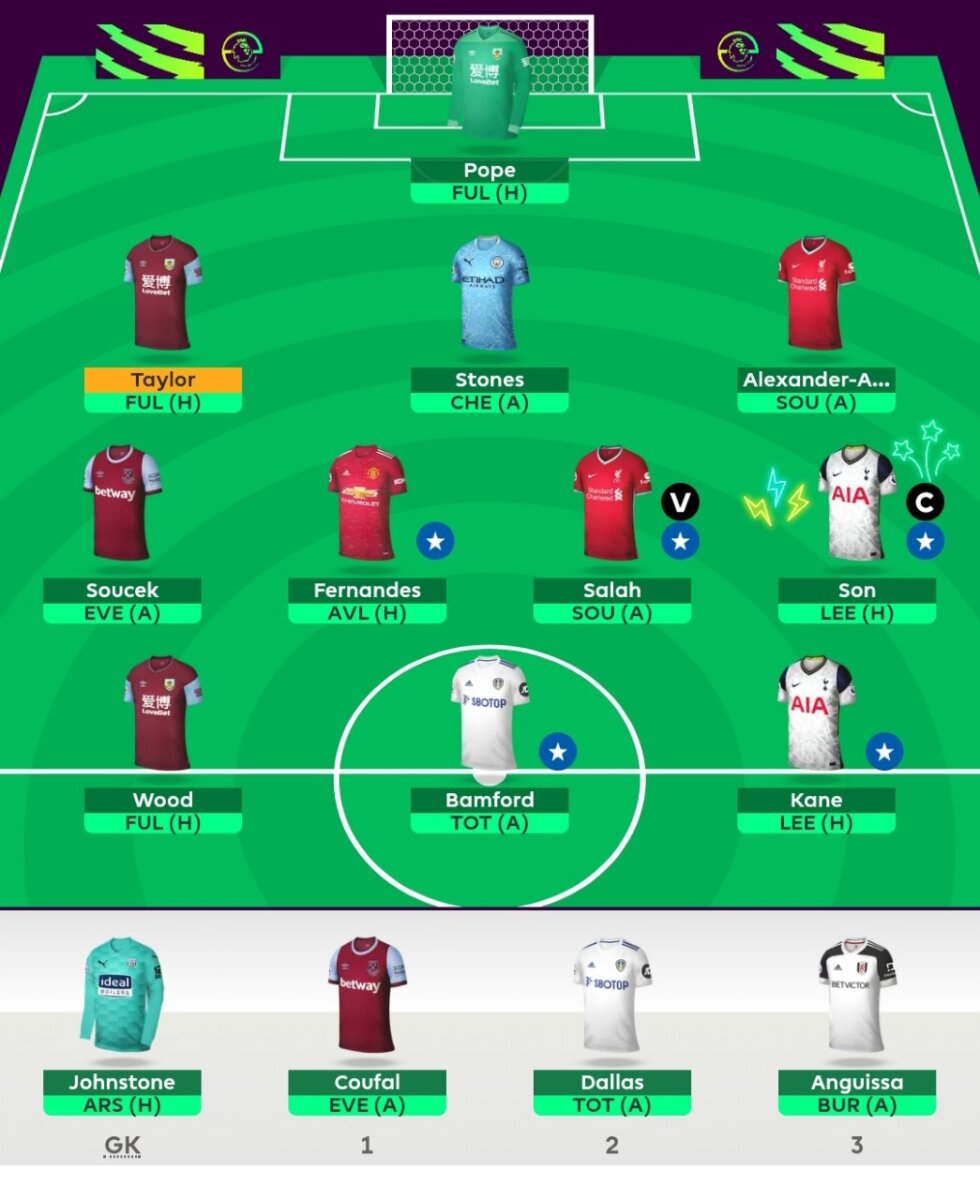 The highlighted FFGeek contributors combined team finished with an overall rank of 52k last season is going ok in 3rd place with total points of 1002 and an overall rank of 42k. You can follow that team, including live transfers, on our subscription Patreon site. 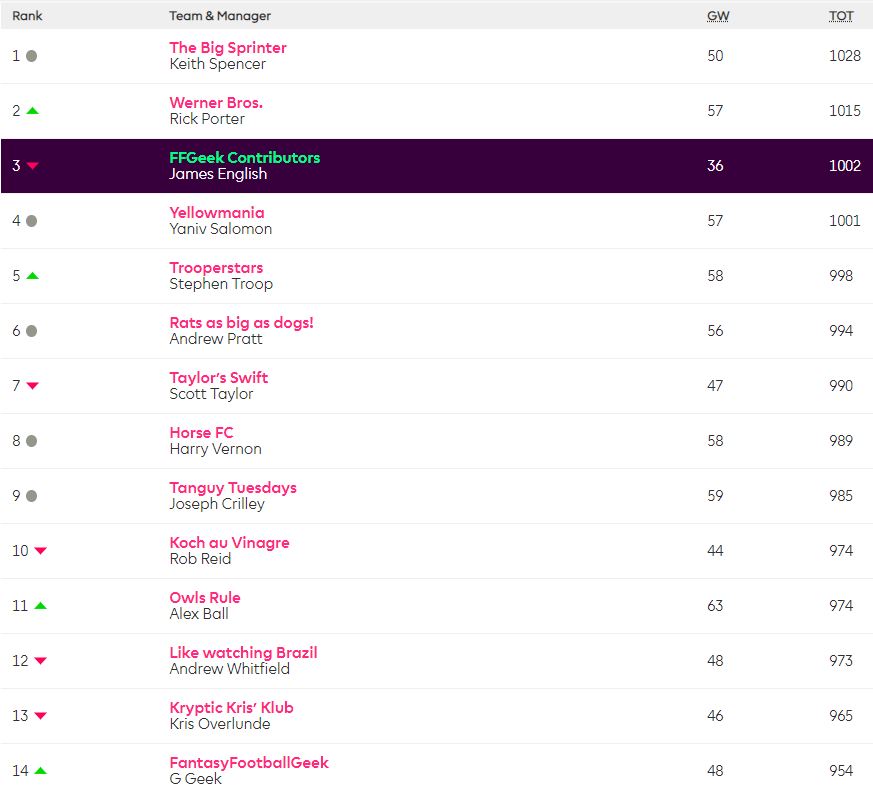 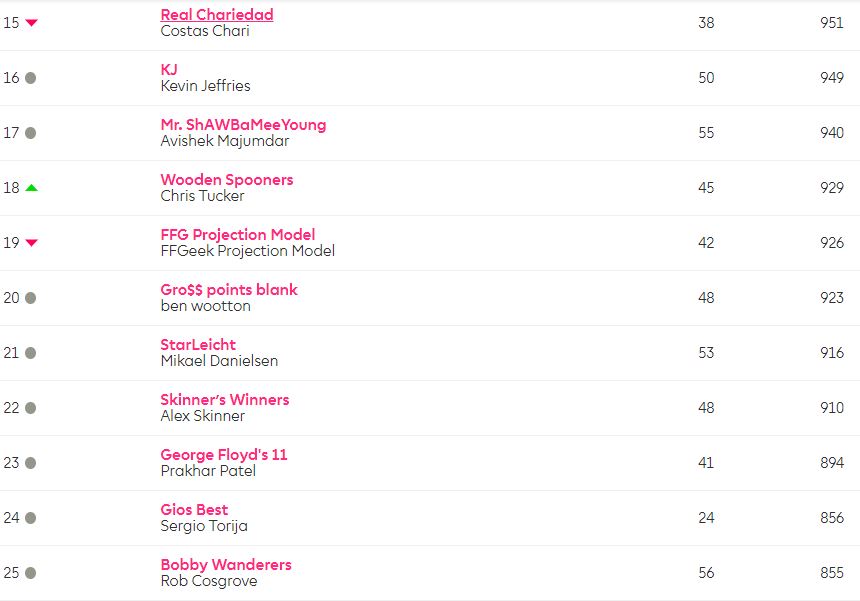