A good week for me despite a bad call. I switched my captain from out-of-form Salah to very in-form Gundogan at the last minute for fear of missing out on a bumper haul, and we all know how that went… Fortunately big returns from Bamford, Martinez, Dias and Dallas helped ease the pain and I’ve enjoyed a healthy green arrow that, to be honest, I was unsure I’d get once all the subs and VC picks came into play.

I should probably roll my transfer as I could really use the flexibility in the coming weeks to adapt for the likely DGW24 that should drop any day now. However, although my team looks fine on paper, I have three Man City assets that could be rested at any time, a goal-scoring Alonso potentially starting over Chilwell, and Bamford suffering from a downplayed dead leg. That’s without taking into account possible Covid cases or this crazy packed schedule forcing yet more rotation. Considering all that, having non-playing Davis sat on the bench when I’m flush with cash and have a FT spare seems like a needless risk. He has to go.

Even though he failed to perform against Newcastle, the obvious Davis upgrade is Calvert-Lewin. Not only is he fully supported again with Digne back, he’s owned by 40% of managers, so could cause damage should he return to his early season form. Everton could also potentially play twice in GW24. The only downside is that it would give me a benching headache each week… but that’s one of the better problems to face.

As price changes aren’t an issue I’ll wait until the last moment to make the transfer in case there’s any late news.

Transfer summary:  Likely to be Davis out and Calvert Lewin in

Kris has used his Free Hit

So a good GW21 for me, helped by Salah captain. It would have been amazing had I not thrown a last minute -4 of Holding to Chilwell; meaning I only fielded 10 players in the end! the only thing I’d say is I was right to think Chelsea defenders would do well but not to risk a move when selection was uncertain. Even if Kane is out I plan to roll, unless of course I get a lot of injury scares in the press conferences.

Andrew hasn’t used any of his chips

GW21 saw a decent green arrow in a week which was unlucky for some with many players rested. Moving Kane to Calvert Lewin was a damp squib with Everton and Calvert-Lewin looking very poor. This was one of those rare games in which your much vaunted forward is practically absent and barely deserves his 2 points. I’ll give Calvert-Lewin another chance in gameweek 22 against Leeds but I won’t bring in more Everton players in a hurry. Spurs were poor too. My captain Cancelo was benched and stand-in captain Gundogan only scored 3. Salah, Bamford, Dallas and the Manchester United double defence did the business for me. I’m really enjoying watching Leeds. Going into GW21, I brought in Salah for Raphinha but took the vice off Salah at the very last minute. That was costly but it feels good having Salah back in the fold.

I have one free transfer. Injury concerns I now have are Bamford (flagged at 75% likely to play) and Walker-Peters, who I probably wouldn’t play away to United anyway. I’m trusting Bamford will shake off the dead leg and be fine to hopefully torment Everton. I don’t have any burning issues with my team and I don’t see any assets I need urgently. I’ll wait until closer to the deadline for further news but I plan to roll this week’s transfer in an effort to ensure I have two transfers going into gameweek 24, which could be a double for some.

Captain will probably be Salah (who I worry might be due a rest soon) and vice on someone who is very likely to start, probably Fernandes. 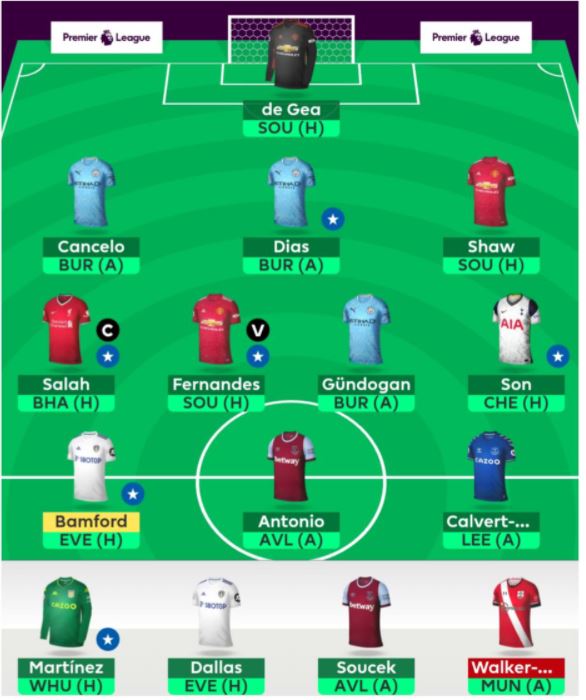 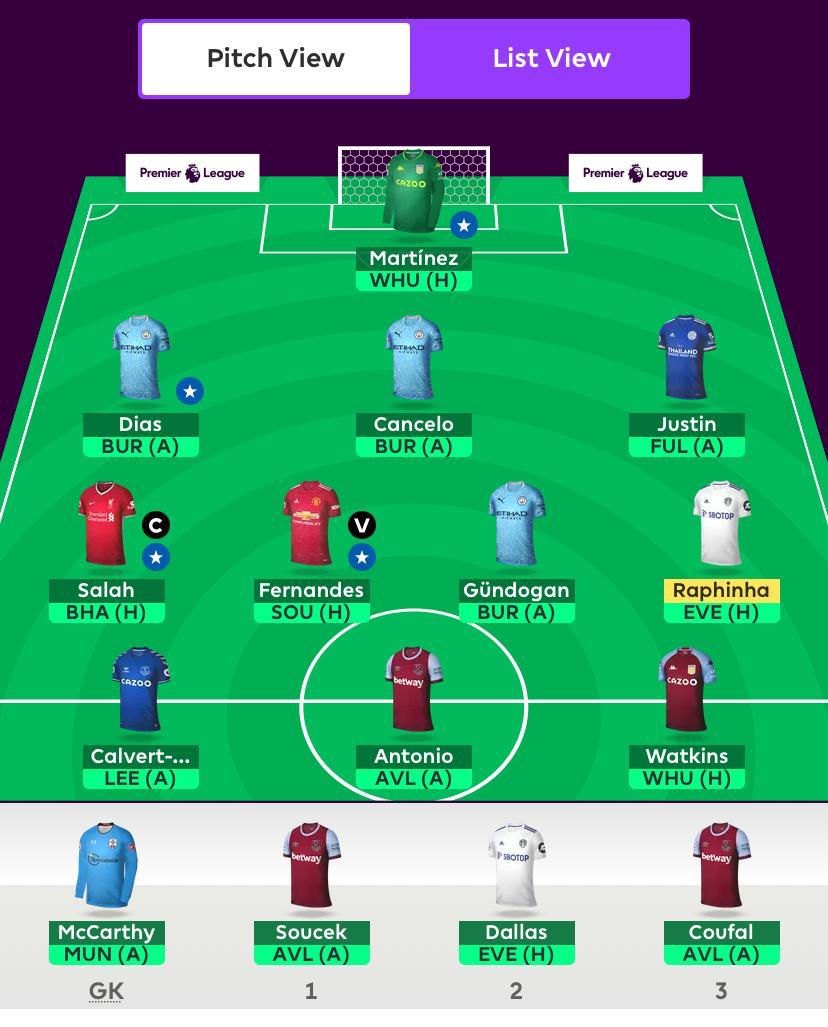 The highlighted FFGeek contributors combined team finished with an overall rank of 52k last season is going ok in 2nd place with total points of 1,353 and an overall rank of 13k. You can follow that team, including live transfers, on our subscription Patreon site. 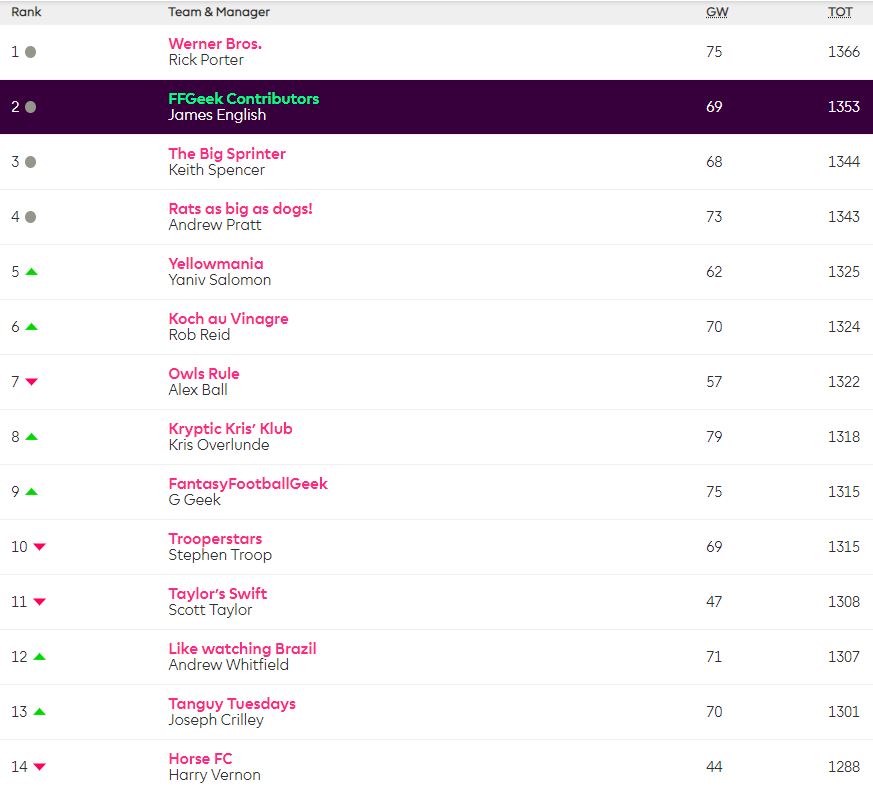 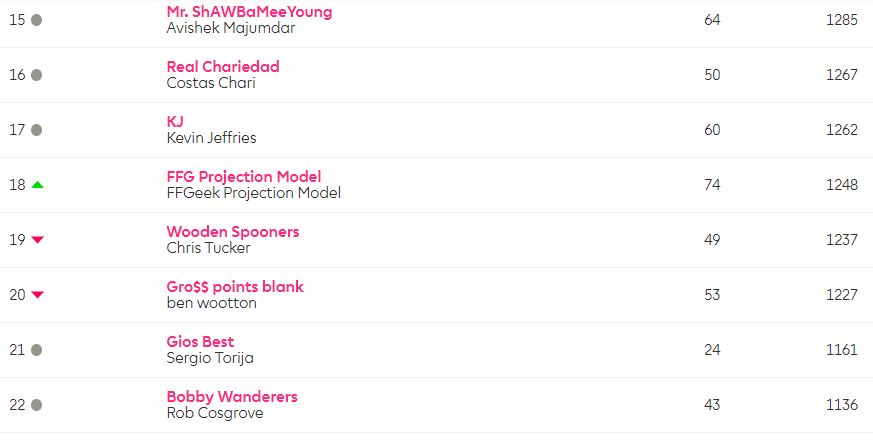