Here’s our fantasy premier league GW24 tips article where we outline our early thoughts on the FFGeek team for GW24.  We review GW23 and talk about potential transfers, captains and lineups for GW24

However I am very annoyed with myself for breaking my own rules about bench lineup. Soucek was £2.90 Anytime to Score and Calvert Lewin £2.70 so Calvert Lewin should have started not Soucek but I deviated from my policy due to last weeks Soucek points.

So if you are a regular reader then you’ll know that I define the template as being if the group of 10 top FPL managers I follow own 7 of them.  If they own someone different it’s called a template replacement player and players who are neither are either difference makers or bench players.

At the moment the template is extremely strong and there are 12, believe it or not, of which I have them all

Here’s the schedule for my team.  The template is the strongest it’s been all season 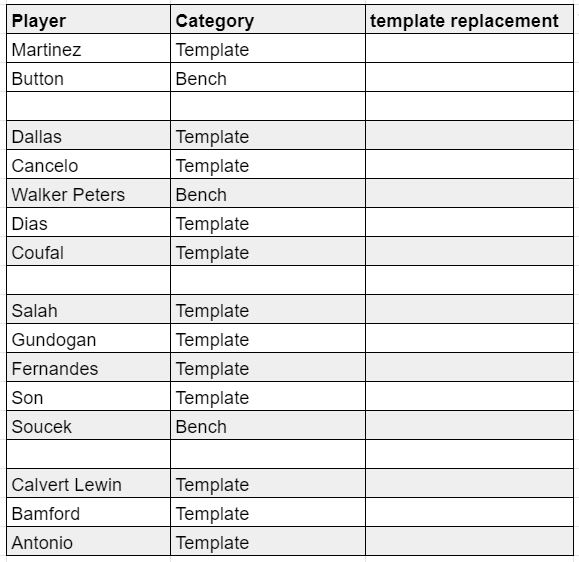 Both of these are double gameweeks

here’s the fixtures for these teams:

Fulham in GW24 play Everton (A) and Burnley (A)

Leeds in GW25 play Wolves (A) and Southampton (H)

Southampton in GW25 play Chelsea (H) and Leeds (A)

The theory is that the games in GW29 postponed due to FA Cup quarter final fixture clashes with GW29 PL games will go into GW26 to create a big DGW26.  Leaving a small number of games in GW29.  I projected about 4 fixtures left in GW29 depending on results.

However there are still the remaining postponements to be rearranged:

In theory, because of these postponements, I think there are teams that can have a DGW26 and a blank GW29 depending on where the postponements are put.  That would make it easier to use your bench boost in GW26 as going from DGW26 to potentially 4 fixtures in BGW29 without a Free Hit would be difficult.

We will have the quarter final draw on Thursday so should be able to make an assessment then.

Without going into too much detail on the postponed fixtures, I personally don’t understand why Villa v Everton didn’t go into GW25?  To me this fixture could go in any midweek?  As we’ve seen, I think Covid will mean there can be clashes with European games as long as the team itself doesn’t play in Europe.

However, should these teams have blanks in GW29 due to cup postponements then the postponed fixtures could go into that gameweek.  That is especially the case with Spurs as if they beat Wolfsburg (or RZ Pellets WAC as they are weirdly known) then they will have no midweek gaps until GW29. It will obviously depend on FA Cup results.

Man City don’t play in the Champions League midweek of GW27 so  presumably their postponement could go there as an alternative?

I hope this makes sense.  I have no special knowledge of this so please correct me in the comments if you disagree

What does this mean for me?

Of my 2 free transfers the only 1 I am thinking of for the moment is Button out to Pope in as it’s always handy to have a DGW keeper.   That would leave me with 2 transfers for GW25 if I can’t think of another for GW24 at the moment.  I have 3 City players and Calvert Lewin.  Pope would give me 5 double gameweek players.  I would still have 1 free transfer

If I’m going to use my bench boost for GW26 then I would play my wildcard in GW25 so I would use that extra transfer in GW24.  That’s a  difficult wildcard as Leeds can’t have a DGW26.

If I don’t use my bench boost then I will wildcard in DGW26 and hope to bridge the gap in someway to BGW29.

I’ll have to mull this over this week.

I think City players are the obvious target but I’m going to see what the polls say.  Vice could also be tricky.  I could put that on Pope.

Here’s the team prior to any transfers 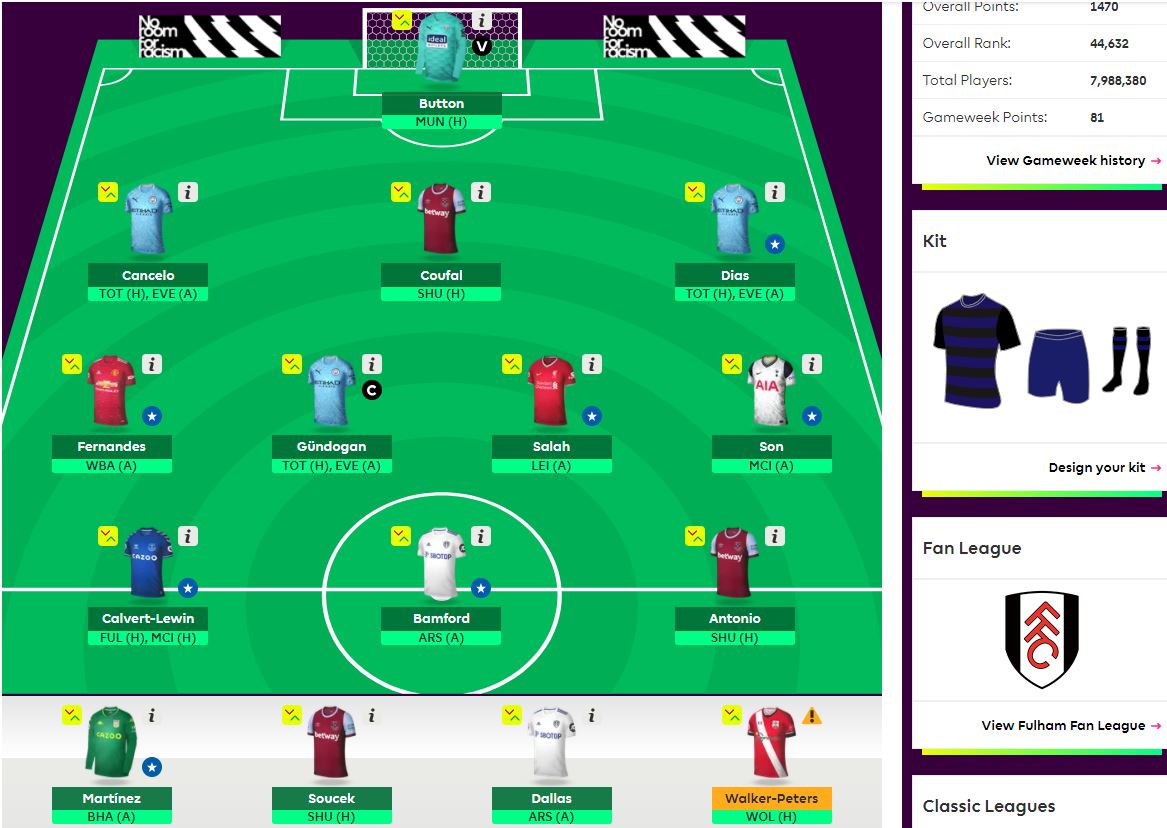