An ok week with a small green arrow. My decision to switch captain from Kane to Gundogan cost me 9 points; though with Gundogan playing both games (as expected) it was still a rationale move.

This week I’d toyed with Reid to Watkins, but Villa don’t seem the same without Grealish and there is no guarantee he’ll be back. It would also mean swapping out a gw29 player, albeit for another, so I can only field 10 in gw29 (without a hit). With the plan to roll my transfer the team picks itself. I’m not overly joyed to have double Leeds attack against the much improved Chelsea defence, but you never know. I’ll make the safe choice with Bruno captain, Salah vice. I think Kane is a good shout too, especially with Arsenal travelling back from Greece on Friday – I just couldn’t bring myself to do it as an Arsenal supporter; having two Sp*rs attackers is bad enough (I will still happily cheer an Arsenal clean sheet!) 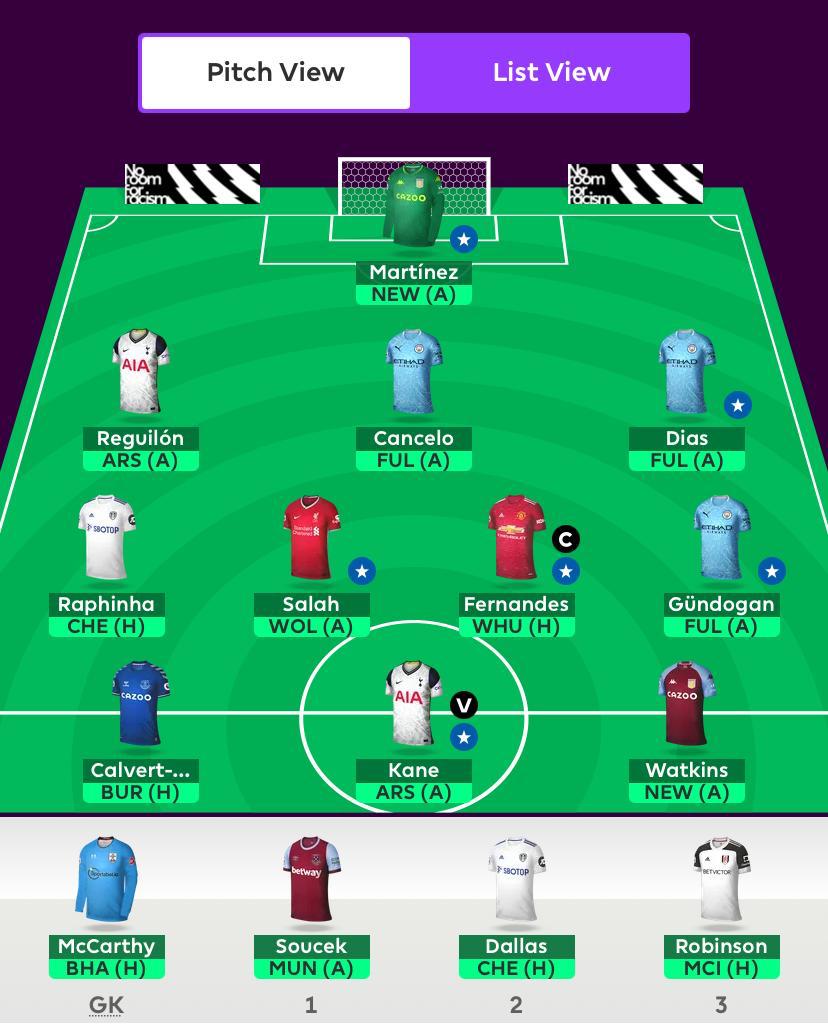 Gameweek 26’s bench boost was a huge failure with only 10 points off the bench thanks to Leeds’ surprising underperformance against West Ham. Painfully, I’ve had more points on my bench in each of the other previous 9 consecutive gameweeks.

Even worse, no Kane or Bale in Gameweek 27 meant a gameweek rank of around 5mil and a resultant doubling of my OR which is back to 28k. It’s been a tough 2 gameweeks.

Going into Gameweek 28 I felt my team was carrying too many passengers in the form of Mee, Pope, Cancelo, Salah, Antonio and the Leeds triplets. Being satisfied that I’ll Free Hit in BGW29 (meaning I don’t need to hang on to the likes of Antonio and the Leeds mob this week) and my perceived need to have Kane and de Bruyne immediately moved me to wildcard now instead of going into GW31, which I would have preferred to have held the chip for. 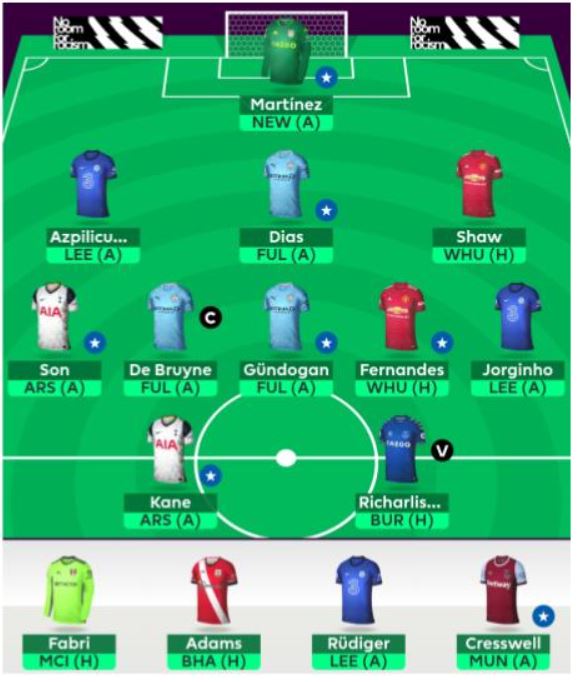 Players who narrowly missed the cut and who have an outside chance of getting back into the WC squad before deadline include:

– Forster (instead of Fabri): A possible double around the corner and can deputize for Martinez in GW31 and GW32

– Digne: Just too expensive while he doesn’t have the monopoly on set pieces

– Bale: A triple up on Spurs is just too risky now but he’ll be in my BGW31 FH team

– Mount: I need to see more to be convinced

– Watkins (who I’m sure causes owners more discomfort than an old hernia injury): The appeal is in his yet-to-be-scheduled double gameweek but Villa aren’t as clinical without Grealish and Watkins needs far too many chances to score; he might come in later for their double though

Captain / vice is undecided but the primary options are de Bruyne, Richarlison, Kane and Fernandes. Since I’m now chasing rank a bit I’ve considered Jorginho as captain against leaky Leeds but that may be a punt too far.

See the current draft above

Stephen has used  his Free Hit Chip and Bench Boost

68 Points and a red arrow from 57k to 64k. Kane’s 19 points, Bruno’s 10 and Gundogan captain and Martinez 7 the only returners with Shaw 3rd on my bench. Salah, Calvert Lewin and the double city defence with 1pt each was disappointing. Transfer in of Trossard gave no immediate returns. Watkins was unlucky, hitting the woodwork again, and has done so more than any other player this season.

Despite a disappointing week, the team on paper looks fairly good this week. Pereira, who has been a massive disappointment so far for me has SHU , Calvert Lewin has Burnley, Watkins has Newcastle and Trossard has SOU so hopefully can get some returns there.

Therefore I’m likely rolling the transfer, and using a 3rd transfer for a -4 next week’s blank gameweek. Salah to Son/Bale and Pereira to a Brighton (possibly other) defender. The -4 could be Calvert Lewin>Antonio or gamble on Bruno>Aubameyang however this will lose me quite a chunk of value when buying him back.

I would then have Martinez, Dallas, Brighton defender, Son/Bale, Trossard, Lookman, Kane, Watkins and Auba/Antonio giving me 9. Not the best but 9 will be around average I expect for those who have been planning. I’ll be hoping for no rotation and to at hold rank vs those with the Leeds attackers.

Captaincy this week is tough, and I think Bruno and Kane will be the most popular picks, for good reason. Currently I’m on Kane given his record in derbies, and Spur’s attack looking better recently. Does feel a bit like recency bias is swaying me though. Shaw is benched over Pereira 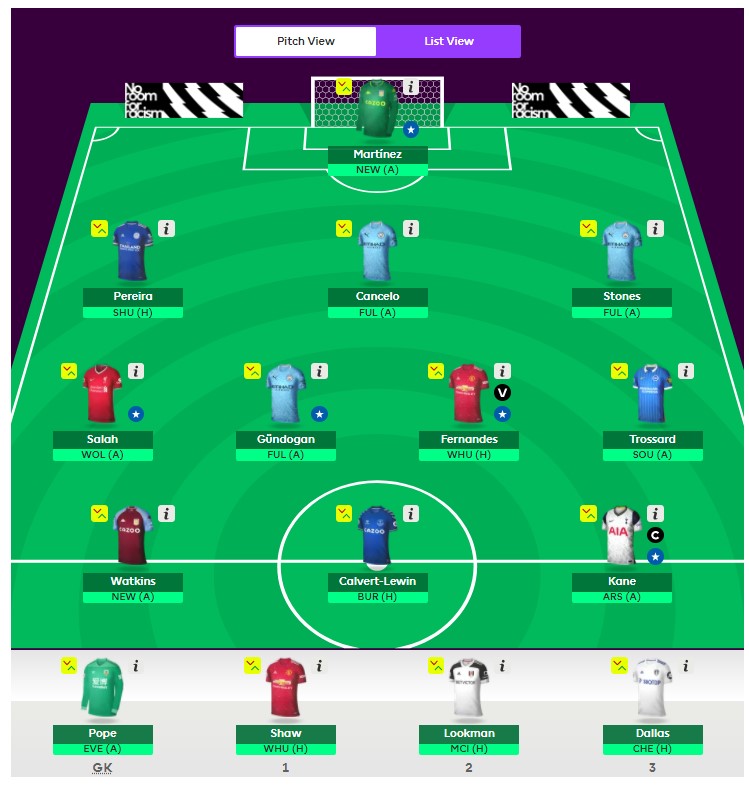 The highlighted FFGeek contributors combined team finished with an overall rank of 52k last season is going ok in 2nd place with total points of 1,824 and an overall rank of 15k. You can follow that team, including live transfers, on our subscription Patreon site. 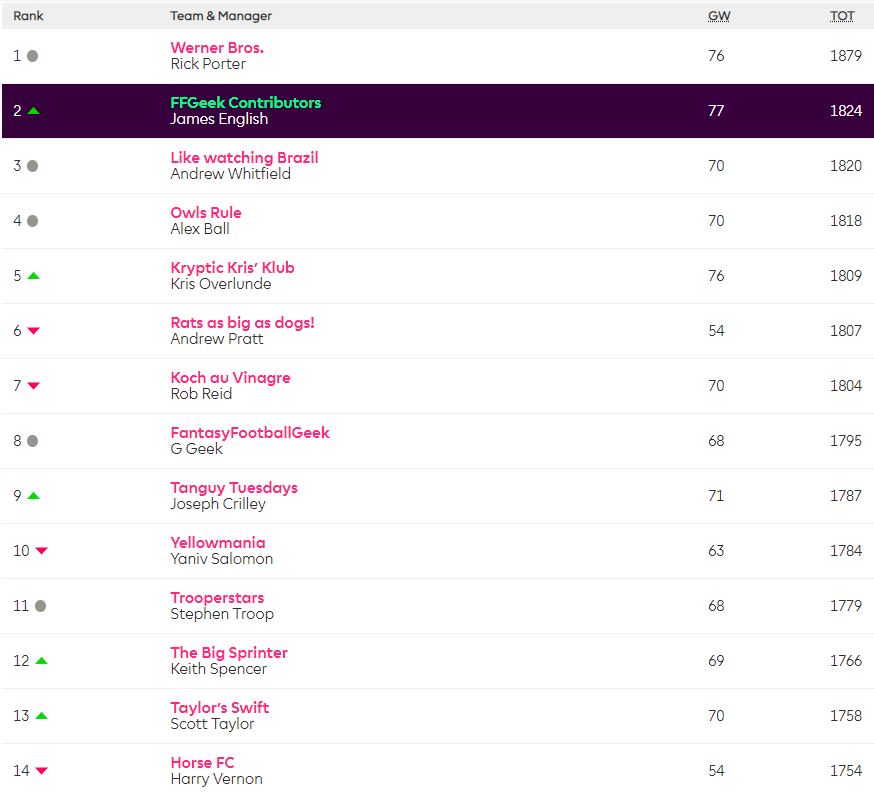 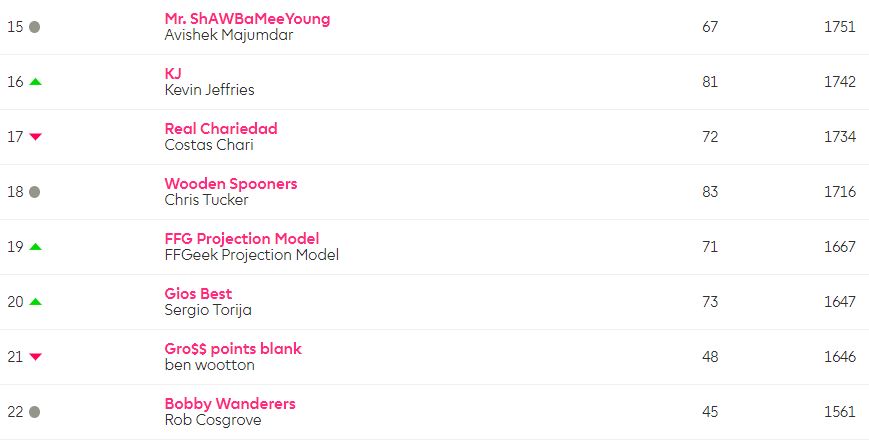