Transfer summary:  Moves likely to be Salah to Bale and then  Calvert-Lewin to Bamford if he’s fit, if not then it’s Cancelo to Cresswell. 2 frees available

This is my current team with 2 FTs to make.

One move I’m definitely making is Salah to Bale. For the 2nd one, I’m debating between
1. Barnes to Auba and
2. Lowton to Veltman
3. Both for a hit.
Captaincy will most likely be on Kane.
Good luck everyone!

Transfer summary:  Likely Salah out and Bale in.  The 2nd to be confirmed 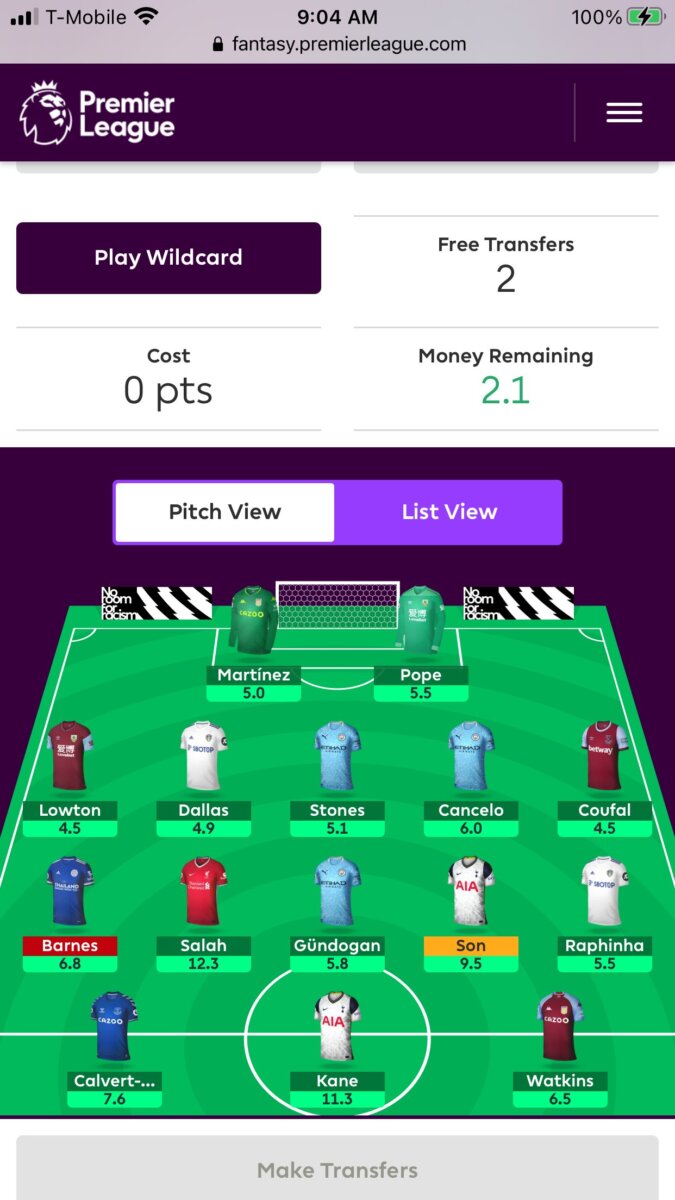 This was a frustrating GW. I woke up on Saturday and thought that I should take a hit to get rid of Salah and Calvert Lewin and get in Lingard and Kane for a 4-point hit. It made sense but truth be told I bottled it. On Sunday, it was awful to watch Kane score 2 and assist 2 to rake up 19 points. Then on Monday Lingard scoring just added salt into my wounds especially with most of my players blanking.

That’s twice that has happened this season. I ‘knew’ that Gundogan would do well at WBA in GW 20 but bottled the hit only for him to score 14 points.

It is theme of this season, that you need to be bold and make big situations to get the right players in for the hauls. My usual strategy of going light on hits is holding me back.

I wanted to get Kane and Bale in for GW29 and their match against Newcastle in GW30.

So, I sold Calvert Lewin and Salah. However, I needed to raise funds so had to sell Gundo or Stones and yes, I ended up selling Stones (14) for a hit.

I normally chase team value much more than I have done this season.

But since about GW16 when games were being postponed, I have stopped looking at the price rise sites and have made my transfers on a Friday night. My team value is quite low at less than 105m. This means I have found myself unable to make the transfers that I want to unless I downgrade a player and take an additional hit. FPL is a much harder game if you have less team value.

My plan is WC in GW31. In GW30 my triple Leeds contingent have a great fixture at home to Sheffield United in GW30. My triple Spurs attack of Son Bale and Kane travel to Newcastle. Man United host Brighton which gives me 8 players with decent fixtures.

Currently I have the following players with fixtures in GW29

Son and Bamford are doubts but best to play them. It would not be the first time an ‘injured’ player has turned out to be fit enough to play.

Looking at Digne to Dunk which would give me 10 players.

Brighton look sound defensively at home and host Newcastle. A double up on their defence could play dividends.

I am looking at Kane with Raphinha as vice

Here’s the team prior to any transfers being made; 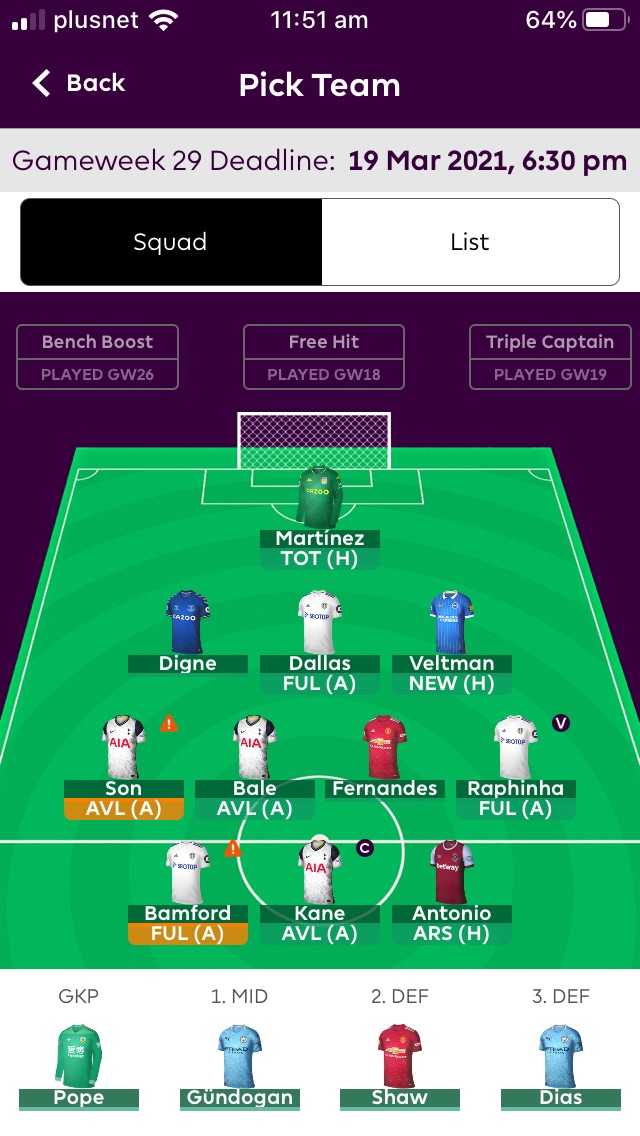 Sergio has used his Triple Captain Chip, Wildcard and his Bench Boost Chip

A decent GW28 for me with 59 points, and another small step in the right direction. Captain blank as was the case for most this week, but defensive returns bailed me out with all but Digne returning points. In attack returns for Watkins and DCL. The double City mids benching worked out well in the end with Dallas and Raphinha coming out from the bench for 9 points.

Now, we reach the long awaited BGW29, although awaited for the wrong reasons with a tiny sample of 4 games to pick from, where no game looks overly appealing. I get here with 6 players whose teams feature in GW29, maybe 5 given Son’s injury. I’ve got options of how to play the week, with 2 FTs and £4m in the bank, and also the free hit chip still to use. Free hit probably sounds like the natural play, but I am really uninspired by the week and don’t want to waste the last valuable chip I hold to get an extra 10 points or so, therefore I am going to save it with the idea to use it in GW33 where City and Spurs blank. That week has favourable home games for United, Leicester, Liverpool, so a triple triple up is on the cards. There was a similar situation earlier in the season (GW18) where many used free hit, and I managed to equal the free hit scores with my team, so hoping to repeat the trick once more.

This week then, I think I will hold Son no matter what, since who knows, he might still make it. Ideally I would do Barnes and Foden or Gundo to Aubameyang and Lingard, but I am 0.4 short of it. TAA, Shaw and the 2 Everton players I don’t want to sell because of good upcoming fixtures. So my moves are still to be decided, one will be Barnes to Lingard, and the second probably Gundo to another mid, but it starts to get desperate on who to pick… Lookman or maybe a punt on Willian or Pepe. I don’t want Trossard because the upcoming fixtures are terrible. I don’t think I will -4 for anyone either, for similar reason, I would be removing good players with good upcoming fixtures for someone that plays this week but who is a worse option and with worse fixtures coming.

Captain will be Kane unless any Europa League injury surprise. Vice I don’t know, maybe Dallas or Raphinha. 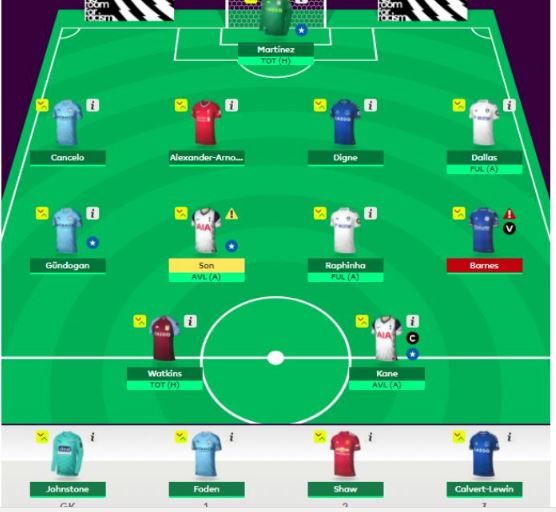 The highlighted FFGeek contributors combined team finished with an overall rank of 52k last season is going ok in 3rd place with total points of 1,868 and an overall rank of 18k. You can follow that team, including live transfers, on our subscription Patreon site. 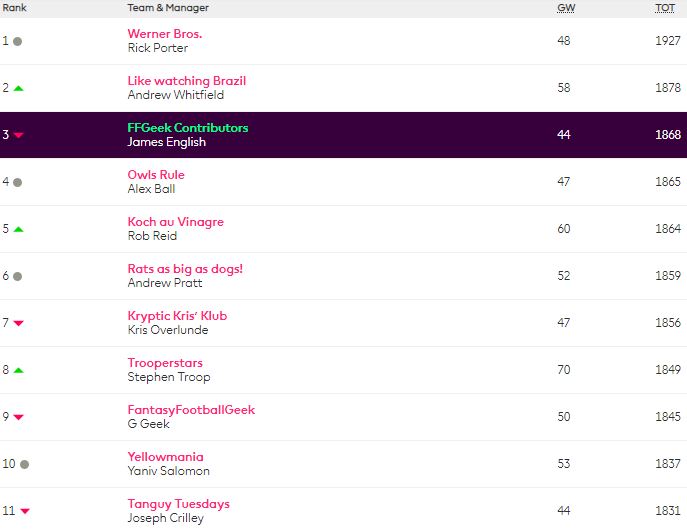 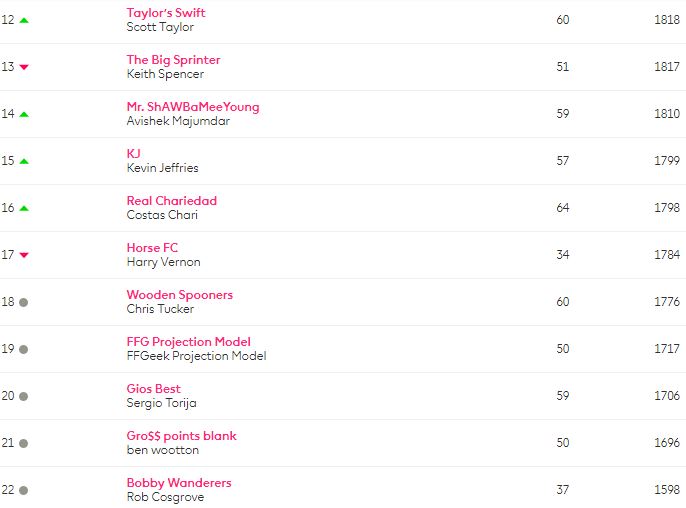