Here’s our fantasy premier league GW29 tips article where we outline our early thoughts on the FFGeek team for GW29.  We review GW28 and talk about potential transfers, captains and lineups for GW29

So the smallest of green arrows to 39k which was a surprise given the mood I went into the gameweek with.

Especially so as I only had 4 players returning a goal, assist or clean sheet in  Shaw, the Man City defence and Calvert Lewin.

The gameweek saw a 2 way captain fail between Kane and Fernandes and also the 3rd captain fail in Salah.  That was a neutralising effect on the gameweek, especially for me with a low returning team.

My biggest 2 potential negative effect players going into the gameweek were Fernandes and Watkins.  Watkins got an assist and 5 points and Fernandes blanked for 3 points so neither hurt me significantly.

Dallas on the bench can hardly be described as a disappointment given Leed’s defensive record and the fact that they were playing Chelsea.  I’ve yet to figure out a better way of organising my bench than Bookies odds but it is something I will need to work on at some stage.  Gut feel isn’t going to cut it either though from a time related procrastination waste or in terms of it feeling, to me at least, a rather unecessarily subjective way of dealing with the problem.

Joseph Crilley’s transfer planner last season was a very efficient method of dealing with the bench points so I may give that a try at some stage.  Man City rotation and general fixture related congestion means I don’t really want my bench full of 3 card magnet £4.5m Bissoumas

Regular readers will know that I categorise players as either Template, Template replacement, difference makers or bench players.

Template is defined by being owned by 7 of the 10 top FPL managers I follow.  I generally have them in my team irrespective of my thoughts about them as it protects my rank downsize.  The rest of the categories are, hopefully, self explanatory 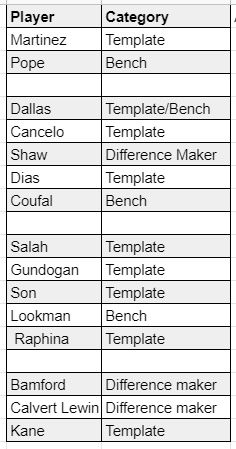 I should firstly state that there is one more template player and that is Bruno Fernandes.  I have no effective replacement for him at the moment. He’s just free points scored against me which is pretty uncomfortable

Categorising my players like this makes it easier for me to think ahead and plan transfers.

I have used my free hit and bench boost chip

This 4 fixture big blank week means I have the following players with a fixture at the moment:

“It’s muscular. Muscular is always not easy. He’s a guy who normally recovers very, very well from any kind of injury.

“When you are in so many competitions, some players have more minutes than others, which is normal. It’s something that can happen.”

It seems impossible Son will be fit for GW29 and hard to say as yet for Bamford but if both are out that would mean a maximum of 8 players for me.  That’s great news for Free Hitters but no so much for myself and others without one.

Thoughts on the wildcard and triple captain chip

Originally I was going to wildcard in GW30.

However a number of players have good fixtures in GW30 and the potential post deadline covid chaos of the post GW29 International Break has made me think that I should wildcard in GW31.

In GW30 for my team 3 Leeds players play Sheffield United

Now while I would probably keep Kane, Raphinha and Shaw. Potentially Son, Calvert Lewin, Coufal, Dallas and Bamford could all not be in the GW30 wildcard team.

I’m not certain at the moment about the wildcard and I am not afraid to play it late so I may just see how things evolve before deciding on GW30 vs GW31.

There are 2 postponed matches to be rearranged still.  Aston Villa v Everton and Spurs v Southampton

Spurs v Southampton where ever it lands is likely to be my Kane triple captain chip.  I don’t think I could trust it on a Villa player or Calvert Lewin although putting it on Martinez would certainly be a novel use.

So who to transfer in?

So the non GW29 players are

I’ve stated that I want to keep Shaw and Calvert Lewin as I’ve said above.   I’ve also stated that I’d like to keep Son and Bamford for their GW30 fixtures if there’s a prospect of them being fit.

That really leaves the 3 City players and Salah as transfer targets for GW29.

I’d like Dunk or Veltman potentially for the Newcastle fixture.  I originally wanted Saka but he is also injured.  I could go Salah to Aubameyang as I think Aubameyang’s punishment for being late to the GW28 game is finished and also  as Salah has a tricky match against Arsenal in GW30 I could risk not having him.  Conversley though Arsenal have Liverpool in GW30 which isn’t easy but I could just swap Aubameyang for Fernandes who play Brighton.

Much to ponder and I need to think more about my GW29 transfers and any news on Son and Bamford may help.

The one thing you don’t have to worry about in a big blank week is your lineup and bench worries.

Hard to think it will be anyone except Harry Kane.  I think I’m going to put the Captain poll up on Tuesday as with Spurs leading Zagreb 2-0 in the Europa League I can’t believe Kane will play.  I don’t see Aubameyang challenging Kane at all.  There’s 1 poll up already on another site and Kane is miles ahead.  So he will probably be my captain

Hope you had a good gameweek! 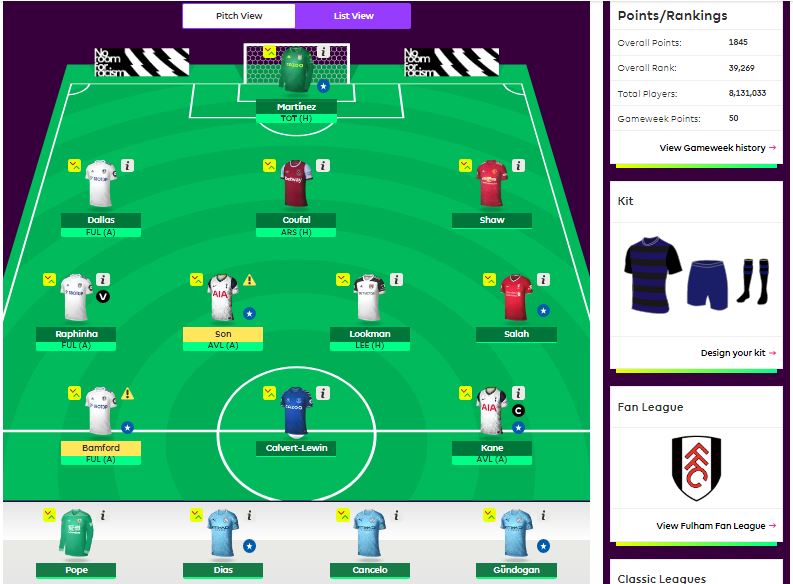