Here’s the points from GW26:

I said in my previous team selection article that I would be happy to hold my rank considering the team going into DGW26 was as it evolved over the weeks as opposed to being a team designed specifically for the gameweek via a GW25 wildcard as many did.  Plus a double gameweek of this size has the potential to be really volatile and rank affecting either way.  I’m always going to worry about the rank downside and let the upside take care of itself as it generally comes when it does, so I guess from that perspective I’m ok with the gameweek

The Kane hit for Son point wise didn’t work out but it was about rank protection so whatever the result in my mind it achieved it’s objective.  The 3 players that were real problems  were Barnes, Son and Watkins.  Only Son hurt me so that could have been worse as well.

As I said I’m likely to wildcard GW30

There are only 4 fixtures in Blank GW29.  I currently have 7 players who will play in that gameweek

plus 3 transfers to BGW29 will give me 10 players

So onto the GW27 transfer decision

Calvert Lewin still has the postponed fixture to play vs Villa which could in theory happen at almost any time considering neither are in Europe.  That includes GW28 which has been touted around as a possibility

Therefore I’m reluctant to transfer him out.  The potential transfer of Antonio back in though is attractive and he does play in BGW29

Shaw is also an option to transfer out considering he plays Man City. Options are difficult considering I have no cash in the bank.  I already have West Ham, Villa and Leeds.  Spurs and Arsenal are too expensive without taking gametime risk.  Newcastle I have no faith in the defence and Fulham play Liverpool.  Brighton is a possibility but even with injuries Leicester is hardly an enticing entry point.

Ideally I’d like to get Son but that means either taking out Fernandes or Salah.  Salah plays Fulham so that’s a difficult one.  Fernandes plays Man City and West Ham.  That is a possibility.

Don’t get me wrong.  I don’t want to transfer out Fernandes.  He’s a real rank killer which I don’t need after working this hard to get to the rank I am after a slow start.  Son also is though, but maybe less so, but he has an easier fixture v Palace but then Arsenal.

So am I reducing rank risk by taking out Fernandes for Son?  Probably given the fixture differential. However while I am reducing risk in the sense that Son is more likely to outscore Fernandes given the fixtures.  Fernandes presents the greater rank risk should the supposed returns not go as expected.  It’s a tricky one.   Fernandes with Pens can get them anywhere although City have only conceded 6 and West Ham 4.

It’s worth mentioning that at the moment Fernandes’ buy price is £11.6m and his sell price is £11.1m for me but that doesn’t worry me I suspect his price will go down over the blank week and it’s not a material factor for me anyway.

So the transfer is Fernandes out and Son in

This is the last chip I have and I will use it in the postponed gameweek that Spurs v Southampton lands.  That should give a double gameweek.  the Postponed Aston Villa v Everton could give one for Calvert Lewin or Grealish which could be another option but less likely

Gundogan is the clear captain favourite in the FFGeek Captain Poll and in the other main FPL Poll so I’m going for him in order to minimise risk.

Quite a dilemma here with Bamford, Calvert-Lewin, Coufal, Raphinha, Lookman, Dallas and Shaw all in the frame for the subs bench.

That incidentally s the order the bookies have given them in terms of anytime goalscorer and clean sheet odds so Lookman, Dallas and Shaw are the bench order.  Martinez clearly gets the mod over Pope in goal

Here’s the team then 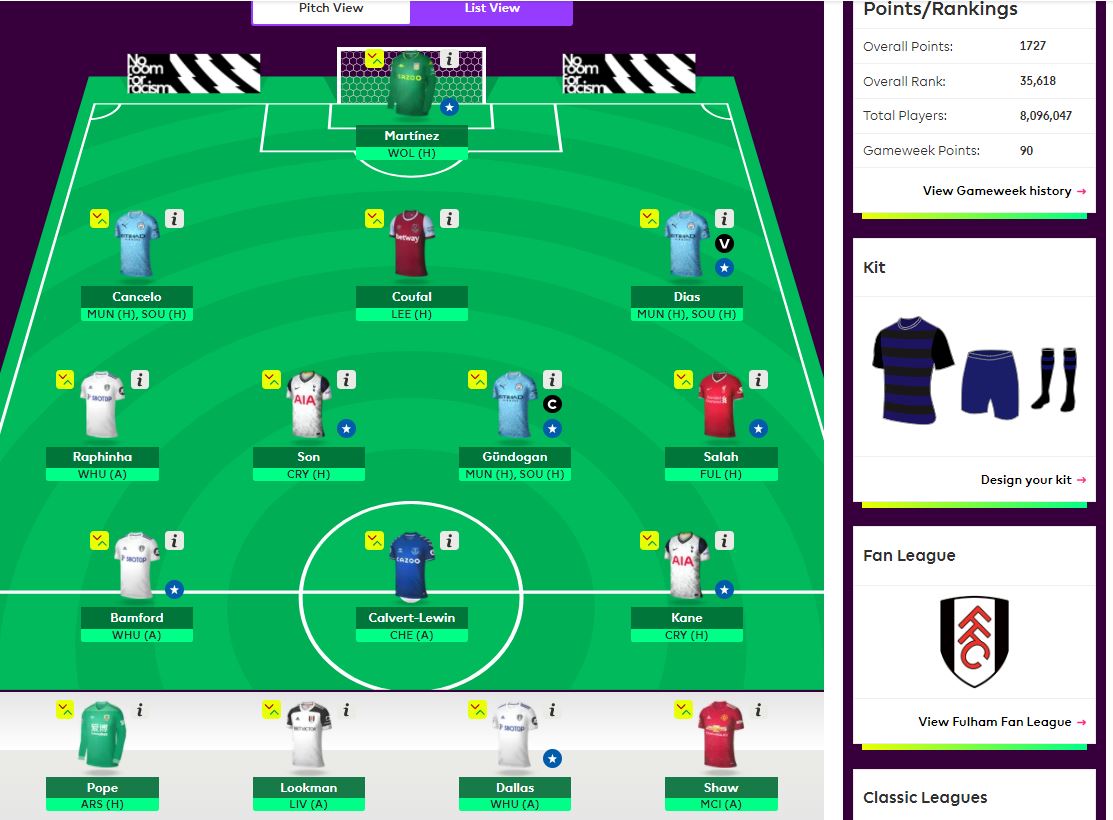