I used my wildcard in this gameweek 9

To get a red arrow on a wildcard is a big no no and to only have 3 players who returned and none of your difference makers, is a recipe for a disastrous  gameweek.

My score was the 2nd worst score out of all the FFGeek Contributors. I’m also 96 points away from 50k overall rank which has moved me from the 80’s away to the 90’s

My original thought on the wildcard was just to take out Bruno Fernandes for Salah and I have the money to do that with a bit to spare.

However having committed 2 of the no nos of a wildcard in a red arrow and your original team doing better I am now considering the hat trick of no nos in taking a 4 point hit to get this weeks captain favourite Jamie Vardy into the team at the expense of Watkins.  The obvious player to take out would be Ziyech but who to replace him with has been difficult.  Ideally I would put Trezeguet in as he has good stats and reasonable fixtures.

However I would need a route to get Salah back for Fernandes and that £1.5m back in the bank to do it.  If I want to do that for free without taking Vardy out that would be in GW12 when Salah plays Fulham.

The problem with that is getting Salah back for Fernandes by taking out Van Aanholt as an option can’t necessarily happen in the Trezeguet option.  I could go Lookman which gives me better options but would I ever play him and the Van Aanholt exit route still isn’t guaranteed.  The safest route would be Bissouma which would give me £5.2m to play with which would make me feel far safer.

There doesn’t seem a stampede to get Salah back and covering Vardy’s 2 games against 2 poor defences in the league at the moment seems reasonable.  Ziyech does play Leeds in GW11 which is a shame though.

At the moment I’m keen to not move my overall rank back further and wait for 1 decent gameweek which moves me up significantly which is how I recovered from a 1.2m GW10 start last season and that’s why I considered covering the Vardy option with a -4.

Who knows what will be the best decision.  FPL is a game of 50/50 decisions none of which I seemed to have got right so far this season

Transfer Ziyech to Bissouma and Watkins to Vardy

Having paid 4 points for him I’m captaining Vardy

Soucek goes in instead of Masuaku was the only choice 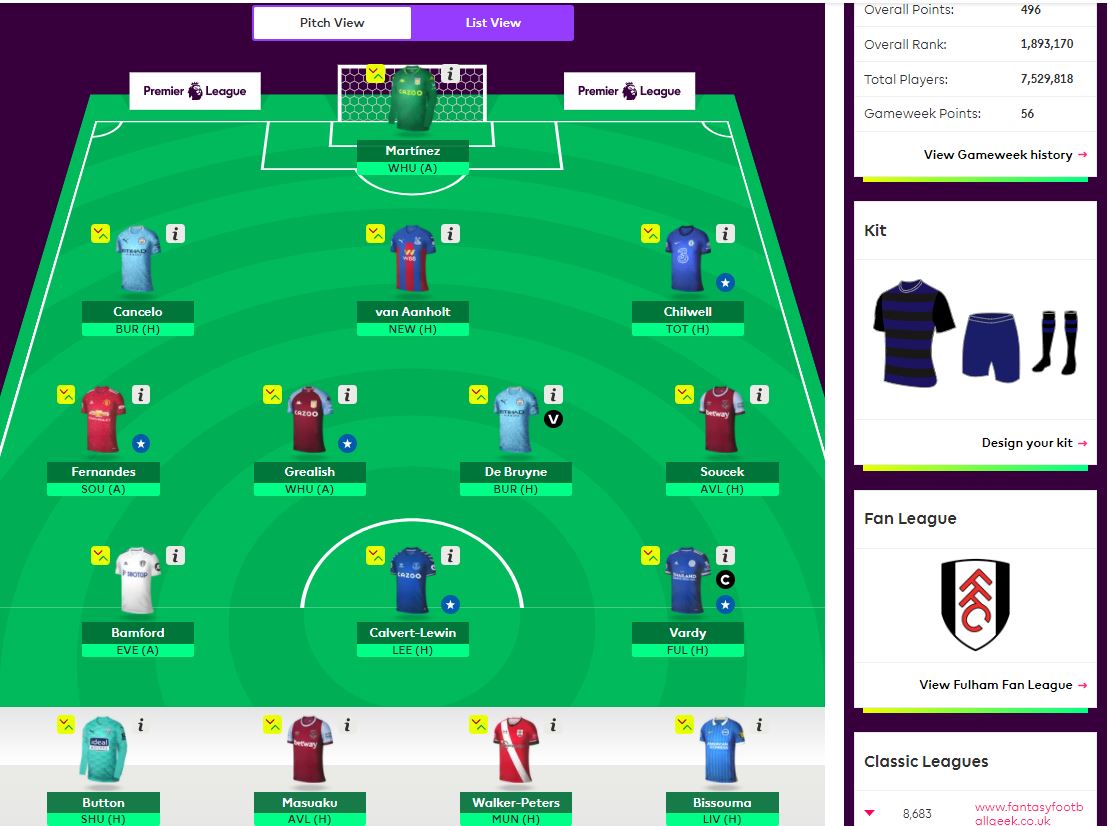