54 points and a green arrow of 196k for an overall rank of 868k.  6 players returning a goal or assist on a largely captain neutral gameweek when it could have been anything but.

If you read these articles regularly you’ll be relieved that, unlike the last 2 weeks, I’m not going to moan about the green arrow.

There are 2 useful related articles on the site.  My planning schedule and Andrew Whitfield strategy schedule

Here’s the players I have for Blank GW18.  Martinez, Cancelo, Grealish, De Bruyne and Calvert Lewin.  I’m not counting Brewster as he seems unlikely to play.

That’s a pretty paltry total of 5.

That 7 transfers to get to GW19 with 4 playing spots to fill.  Assuming I’m relaxed about bench boosting later if required.

Considering Man City play Palace and Spurs play Sheffield United.  It will be difficult not to have Kane/Son and/or De Bruyne.  So that could be 2 additional spots to fill although it is likely I will have to get rid of 1 of the 3 premiums I have to do that.  Grealish could become Son at a push I think although Villa have postponed games to fill and I could imagine 1 of those going to GW19.  Anyway he has WBA this week so a problem for another day.

Given the  shape of my team and the conundrum of the fixtures being the mirror image of each other due to the fact it’s 2 gameweeks split differently I’m likely to Free Hit in GW18 and build a team for the double teams between now and GW19.

It does mean no free hit for the postponed quarter final fixtures in GW29 which is not ideal butI think we will get 6 gameweeks or so to prepare for that then can use the 2nd wildcard afterwards to reshape the team for GW32 and GW37 which is where the postponed games are likely to land.  There seems no way of dealing with 18 and 19 simply without the Free Hit.

My decision to take Masuaku over Coufal has really blown up in my face.  I now can’t use 1 of my transfers to get Coufal in as he’s £4.6m vs my selling price of Masuaku of £4.5m.  I did think of Balbuena who is £4.5m but he is an injury doubt.  Not ideal at this time of the season.  I also thought about Cancelo out for Matip as he has some good fixtures but again he’s a bit of an injury doubt and Cancelo has Newcastle in GW15 which should be a clean sheet if he plays.

I did go as far as thinking of Giroud for Calvert Lewin.  His stats are outstanding but would he play both doubles for Chelsea anyway?  I doubt it.  I also though of Adams but he has Man City this week.  These transfers were tempting but with Calvert Lewin having Sheffield (his old club) in GW15 I’m keen to hold.

That leaves me with an option to get Charlie Taylor in for Masuaku.  They have some good fixtures up to the double but the double itself is West Ham and Liverpool which could easily be 2 blanks.

I have even thought of not using the transfer which would be the first time ever but with Leeds playing Man Utd and Walker Peters playing Man City it’s not really the time.

In the end I’ve decided Masuaku out Charlie Taylor in

The polls seem to be between Fernandes and Salah.  I’m following the FFGeek poll and going for Salah with Ferandes vice

This was easy to the extent that Dallas and Walker Peters were always going to go on the bench.  The only issue was the order that Brewster would be on the bench.  McBurnie could not be fit but there’s still a number of strikers to go ahead of him so I’ve put him last.  I hope I don’t regret it. 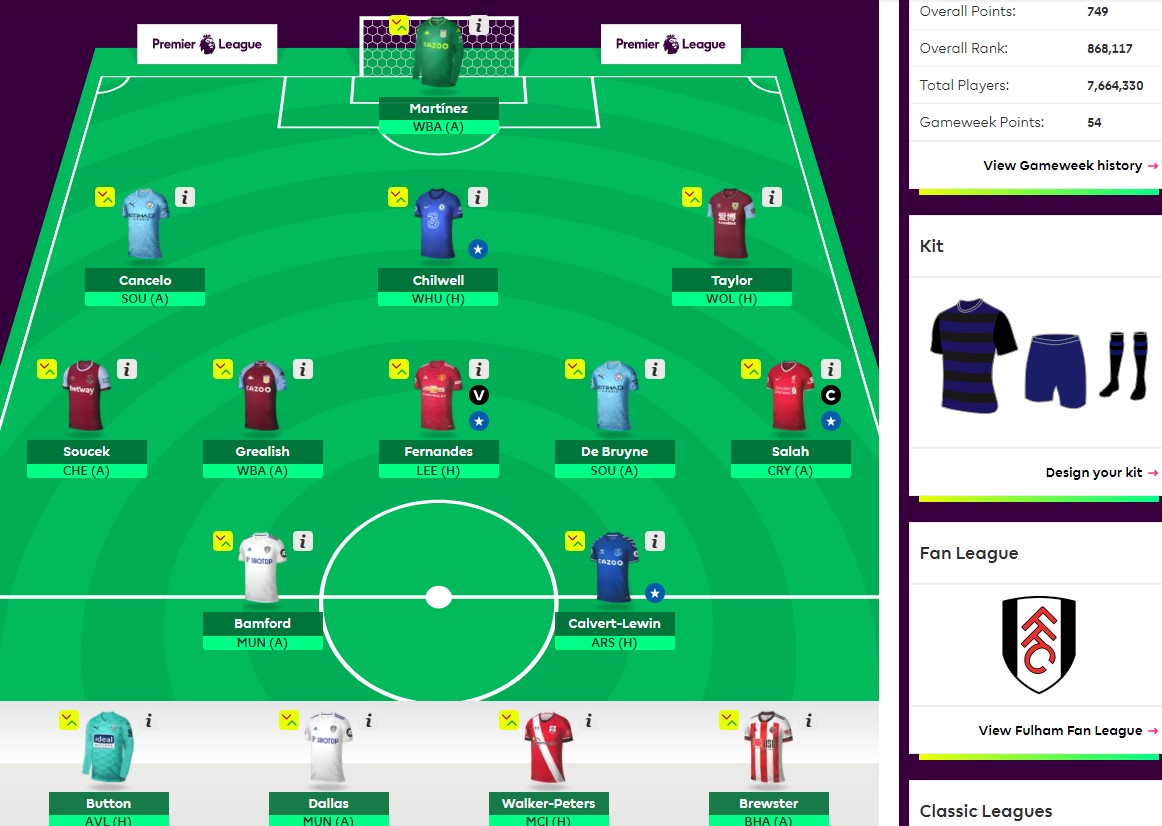