So a 43k green arrow to get to 92k overall with the Free Hit Chip.  The late change of Reguilon was a massive disaster and cost me 8 points unecessarily.  I should have listened to Spurs expert Joseph Crilley who said he had already got his punishment for Mourinho and was likely to play

Ampadu on the bench was also a disappointment.  Had I listened to the bookies odds he would have been at least first on the bench and if I had been really strict ahead of Saka.  However Saka was owned by every man and his dog so he was always going to be in the lineup so there was never a realistic chance that he would play.

The major bit of good fortune for me at least was Tierney not playing and Lacazette blanking.

In FPL you live and die by your 50/50 choices.  You just have to hope that over a season they even out.

This week I have always been taking out Son for De Bruyne.  De Bruyne is a slight captain favourite and even been tripled captained so there was no way he was not coming into my team.  He also has a great run of fixtures coming up.  I don’t have the money to get him in without taking a -4 point deduction.

The choice to fund it was either Kane out for Antonio or Grealish out for Saka or Lookman to fund it.  I wavered between the 2 all week.  I could have drowned myself in stats but all they do is lead you to more indecision.

Kane has a great fixture vs Sheffield but it’s only 1 fixture and Sheffield will park the bus big style.  Kane also has Liverpool next.  Grealish and Antonio both have 2 fixtures but who knows what’s going on with Villa and Covid and 1 fixture is against Man City so almost a non fixture.  Antonio is coming back from injury so who knows how many minutes he will get.  Interestingly Antonio is the most transferred in player in our transfer in poll

In the end I had to make a decision and I went for Kane out but I could have easily gone either way.

With a slight lead in the FFGeek Captain  Poll  I’ve gone for De Bruyne.  Salah is my default captain but I’m not keen on the Man Utd fixture.  I think they will make the Sheffield Utd bus parked look like a little hot wheels bus replica.  De Bruyne has the better fixtures so I’m going for him.

I’m not going to go for the triple captain although I am tempted.  No solid reason really more gut feel

No real choice to make here.  I fear Charlie Taylor won’t play v West Ham but will v Liverpool and I’ll end up with negative points so I’ve gone for Dallas instead.  I put him ahead of Walker Peters though just. 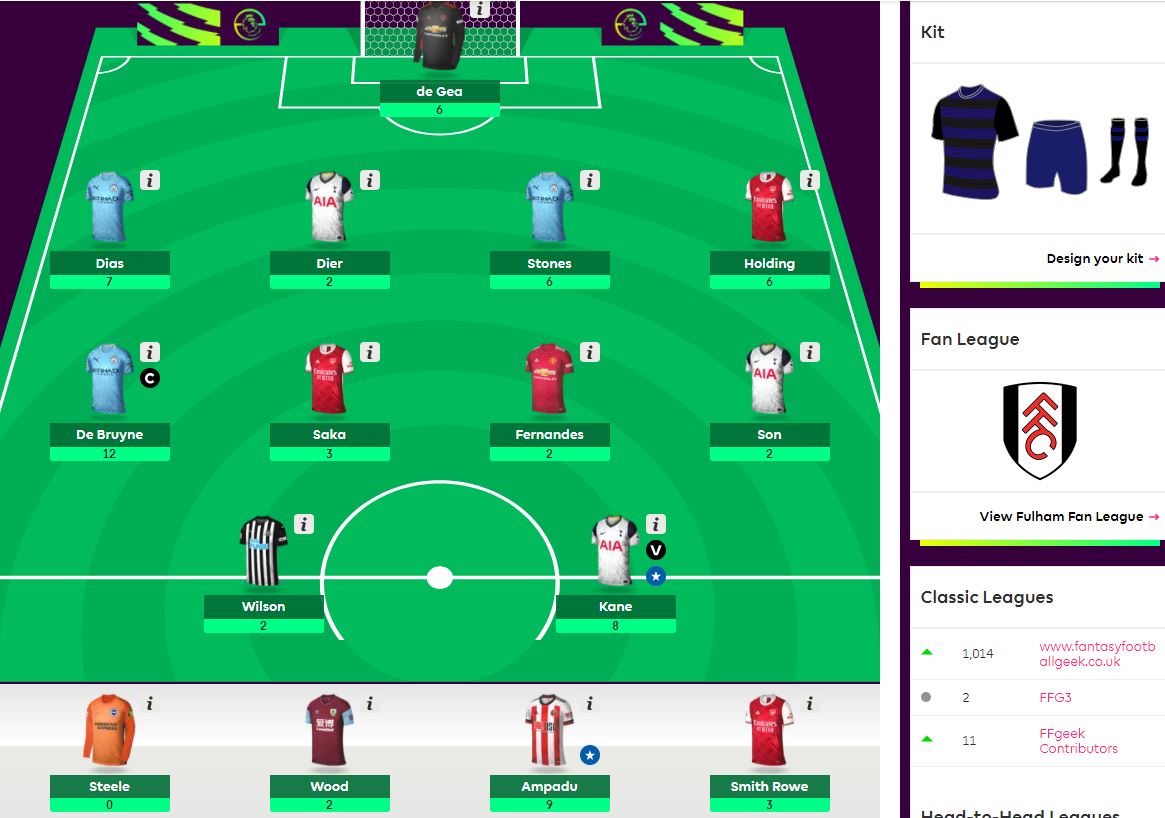