A red arrow to 126k overall rank.  To get a red arrow at all, let alone one which adds a third to your overall rank, is really not what a double gameweek is about.  For that reason it’s impossible to say how disappointing the gameweek was.  To some extent it was about which Man City defender you had and obviously having Cancelo was the worst pick of the 3 options.  Justin’s 14 points also was a big negative on my rank.  Luckily for this gameweek I chose Antonio over Jesus otherwise it could have been much worse

De Bruyne who’s out for 4-6 weeks is the obvious person to go.  With Man City playing WBA it was just a case of choosing Sterling or Gundogan.  It seems strange not to choose a Man City player with a view to captaining him which would be Sterling but with every man and his dog going for Gundogan and then Kane next week this is the path I’m going to follow as a safe move. 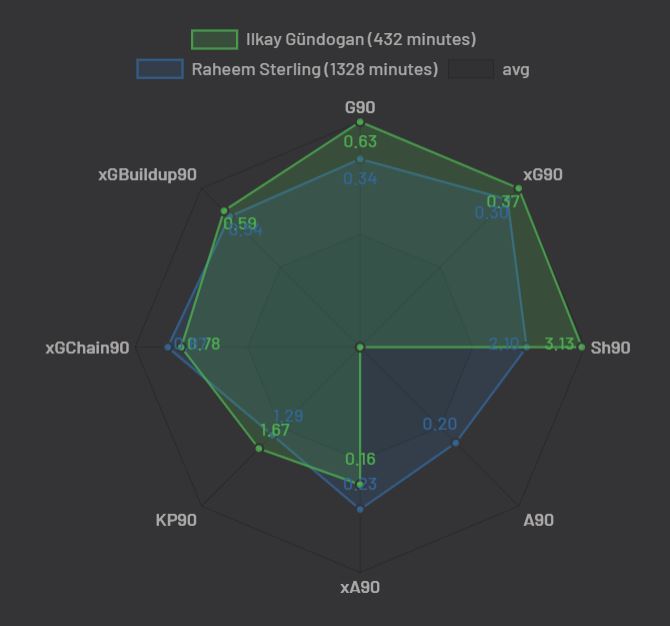 Albeit on far less minutes and this season Gundogan is way above his historical numbers and Sterling way below his.  However I don’t believe the narrative that Gundogan is more of a threat than Sterling.  In the previous 3 seasons Gundogan has scored 13 goals, Sterling 42.  The Bookies with Sterling £1.91 to score vs Gundogan at £2.63 even with penalty duty assumptions

However, there is a big money difference and it allows me to get Kane next week.  The alternative would be to get Kane in GW23 when they play WBA and use Sterling as a captain possibility next week vs Sheffield and even Burnley.

However I’m going to stick with the Gundogan transfer.

The 2nd issue is that I have no bench for this gameweek.  Taylor is a doubt and Walker Peters is definitely out.  Brewster has not started any of the last 3 and plays Man Utd.

The 2nd decision is to whether transfer Taylor out for  Dias or Brewster out for Kane.  Dias is more certain of returning (£1.61 for a clean sheet vs WBA) but Kane (£2.15 anytime goal scorer) has a bigger points ceiling if he does score.  Although this would give me cover it would mean Soucek goes to the bench vs Palace.  I have Antonio anyway but seeing Palace struggle in the air vs Man City (Stones scored 1 goal in 11,000 minutes before that game) has made me wary of him not being in the team.

Going back to Dias,  I may not get the chance to get him in my team in the short term.  Man City have a number of postponed games so a DGW coming up could mean a -4 anyway in the short term.  I chose Dias over Stones as I think he’s the most secure longer term.

That and the chances that I have no bench meant I went for the -4.  It does go against the never take a hit for a defender general feeling in FPL and against my belief that hits are mainly defensive for captain protection and I could easily wildcard in GW25 anyway but I think I’ve convinced myself the reasons for outweigh the reasons against.

so transfers are De Bruyne out and Gundogan in.  Taylor out and Dias in.  I have £7.5m in the bank.  Enough for Harry Kane in next week if that’s the transfer I choose

Bruno Fernandes leads the FFGeek captain poll handsomely so I’ve gone for him. Vice was trickier and could be relevant.  I went for Bamford although it wasn’t an easy choice.

It was the old Dallas v Coufal v Soucek conundrum.  Soucek lost it on the bookies odds of clean sheet vs anytime goalscoring odds 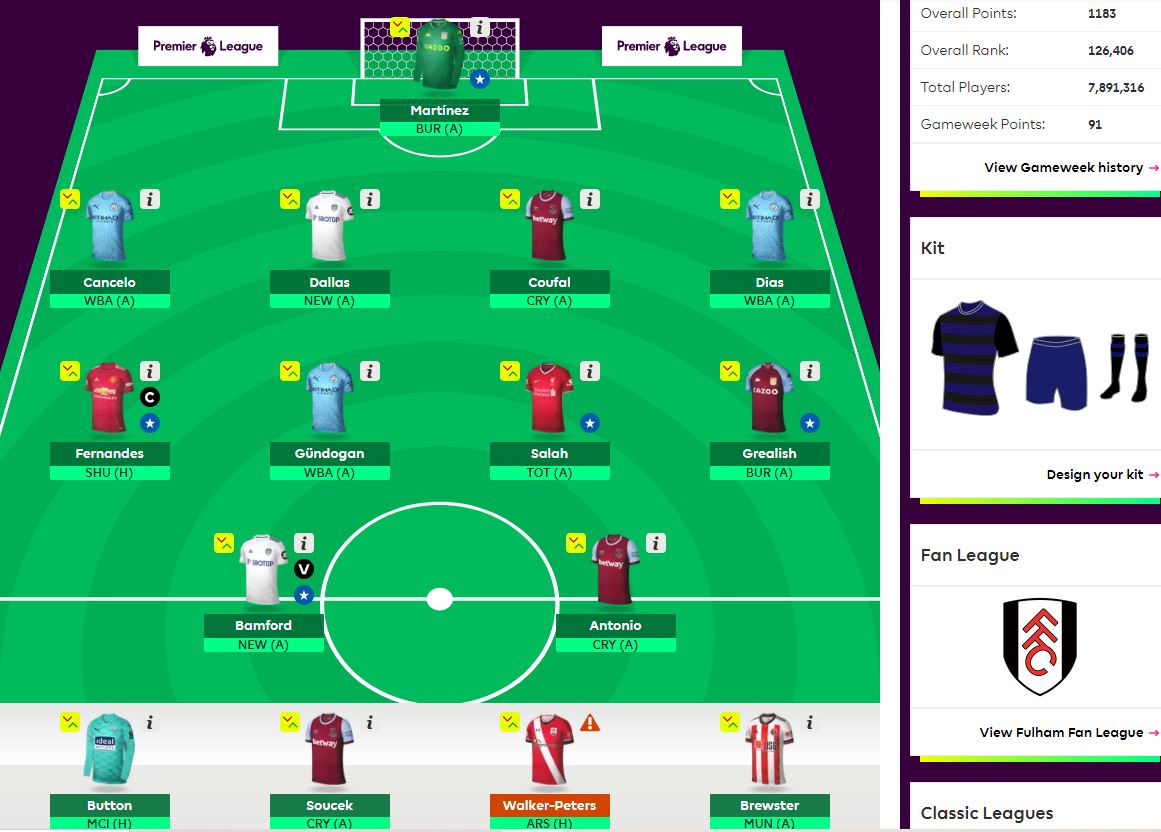