So although it was a 28k green arrow to 98k overall the gameweek was 1 of great disappointment.

The Taylor to Dias transfer for -4 was what I call a proactive hit in that I’m trying to improve my squad rather than use it as a shield for a captain favourite which is normally  the only way I would take a point deduction. I broke my rule for no reason and paid dearly for it.   The transfer meant I left Souceks points on the bench and now this week with Harry Kane injured I am prevented from putting Sterling in as a Man City triple up.

Anyway have to move on

Yes that’s not a mistake it’s the money left over from the De Bruyne to Gundogan transfer.

Originally the plan was to use the money to upgrade Brewster for Kane but he’s now injured.  It’s hard to know how long for especially after the whole Son thing earlier in the season when he was supposed to be injured but then didn’t miss out even a week if I recall.  The circumstances feel scarily the same.  Anyway while I know some people have held on and kept him in their team for that reason including our Spurs expert  Joseph Crilley with his transfer planner team  but that’s one thing, to transfer him in would seem to be madness.

So now my transfer options are 3 fold:

Soucek or Grealish out for £9.8m Son.

This would put me in line with the template of the 10 top FPL managers I follow.  Also I imagine Son will play as a CF in Kane’s absence although I guess it could be Vinicius.  Son’s underlying stats quality wise are excellent but his volumes are terrible and in the region where I wouldn’t touch a player.  However his template status means I really should get him in regardless of what I think of him.  I put Fernandes in despite serious doubts about him for the template reasoning and if I didn’t it would have been a disaster.  I’m reluctant to take Soucek out to facilitate the transfer as he has Fulham and Sheffield United in GW23 and very reluctant to take Grealish out due to the form he’s in even if his fixtures aren’t great.  Unfortunately if I take Soucek out I don’t have enough to do the transfer of Brewster to Calvert Lewin which I mention below.  If I can get through Brighton though Son has Chelsea next which is far less scary but I have to have him in GW23 for WBA or Kane if he’s back.

Brewster out for £7.6m Calvert Lewin

Calvert Lewin has 2 fantastic games against Newcastle and Leeds next and he has Rodriguez and Digne back.  It’s a leap of faith as his underlying stats in quality and volume haven’t been that great recently but you can correlate that to Digne and Rodriguez being out if you’re looking for reasons.  He had both against Leicester which was a pretty ordinary 2 shot performance although we are talking against a different class of defence.

Walker Peters out for £4.5m Rudiger

This would fix the defence this week as I have to play either Coufal v Liverpool or Dallas v Leicester. Neither of which have any realistic prospect of a clean sheet.  Although new manager Tuchel has only put out 1 team it seems he wanted Rudiger for PSG when he was there which is a good sign if true.  Chelsea have great fixtures and are a good defensive team.  Even more so I expect with Tuchel in charge.  That would also have the advantage of being forced to play Soucek after last weeks disaster.

So what to do?

The thing about this is that you can analyse and pontificate all you want but there’s no correct answer you just have to make a decision.  I’m going to go Brewster OUT Calvert Lewin in and hope for the best.  I did think about a -4 to do both the first 2 options but have decided not to especially after last week

I’m going with the FFGeek  captain poll favourite of Gundogan with Salah as my vice.

I do this through Bookies odds which last we screwed me in GW20 but I’m sticking with it.  The decision is Coufal vs Bamford vs Soucek vs Dallas

There needs to be a 3rd Defensive option which is between Dallas and Coufal on exactly the same odds for a clean sheet. Dallas has slightly the better attacking stats so he gets the nod there.

Bamford has better anytime goalscorer odds than Soucek so I’ve put Soucek first on the bench again.  Here’s hoping not for another disaster.

Good luck everyone!  May you make the right 50/50 choices 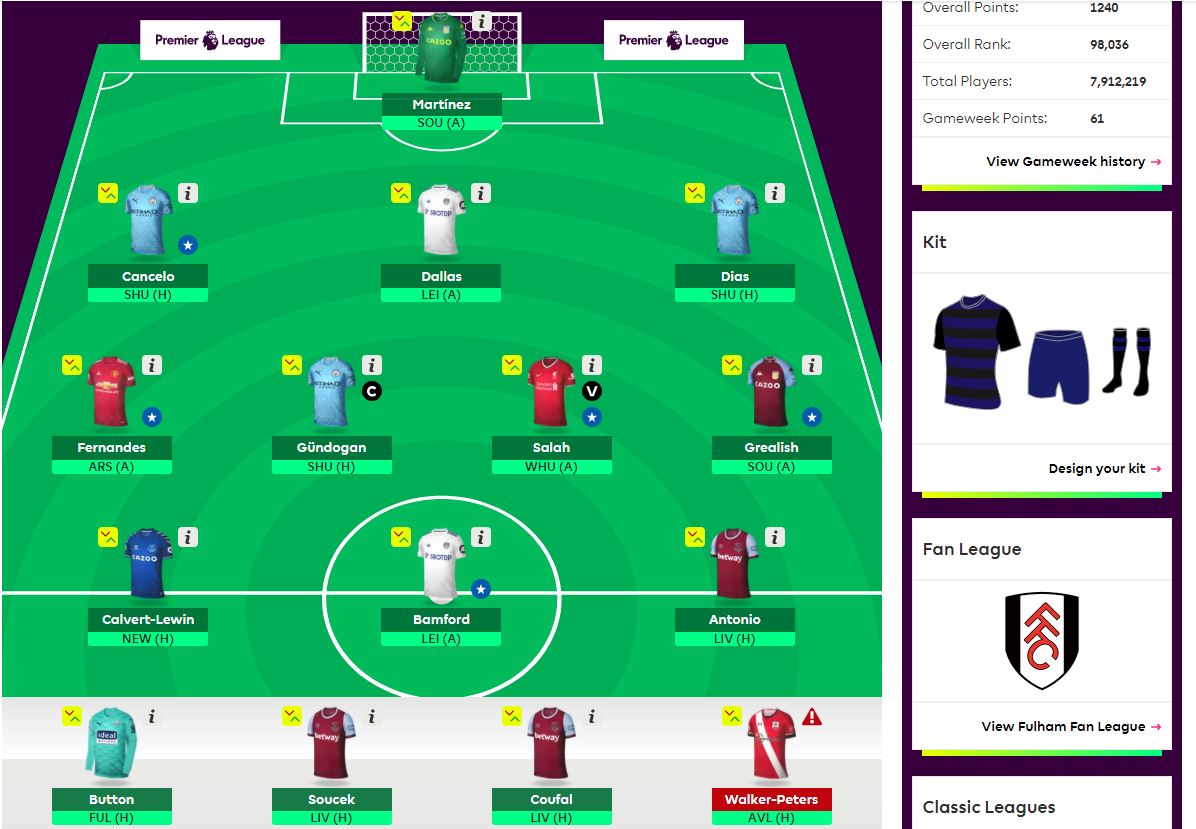