This week has been about whether to get Son in the team or not.  The FFGeek Captain poll shows him as 2nd favourite and he has been sold.

He’s still owned by 7 of the 10 top FPL managers I follow and for me I haven’t come this far from 2 million overall rank in GW10 to get a rank busting score against me no matter how bad Spurs and Son have been. WBA have parked the bus successfully but have also been hammered as well.   I have my doubts about him underlying stats wise as although his quality of shots are good his volumes are pitiful.  I normally will ignore in principle any attacker who both shoots less that 2 times per 90 and key passes less than 2 times per 90.  Son does both.

However he is template and this time I’m going to cover him.

The question is how.  Soucek has Fulham and Sheffield next so he can’t go.  I know some have decided to do the hokey kokey with Salah as he faces City but I don’t really want to do that.

I’m going to take out Grealish.  He has Arsenal, Brighton and Leicester next so I hope he can not do too much damage.  Leno being injured for Arsenal is a negative but David Luiz out is a plus especially as Grealish has penalties possibly.  Matt Ryan appears to be fit and although I think he’s a poor GK at least he’s not Runarsson who seems totally not up to the job.

So the transfer is Grealish out Son in

You may have seen my article on these which has some player suggestions.  I also did an imaginary wildcard article picking out the key players for them on the Patreon site

I have 2 free transfers for next week and out of the 4 teams I have 3 City players and Calvert Lewin of Everton but no Fulham and no Burnley.  I’ll probably get Pope in next week but not sure about the other free transfer

For GW25 I have Dallas and Bamford from Leeds and Walker Peters of fit from Southampton.  I’m probably not going to bench boost for the DGW26 so may just wildcard in DGW26.

I normally follow Bookies odds but I’ve not strictly this morning.  I’ve played Soucek over Calvert Lewin although the margins are very small. Walker Peters could be available apparently but I have put him 3rd sub despite their odds being better than Citys.

Fernandes leads the FFGeek Captain Poll comfortably as he does in another I’ve seen so I’ve gone for him. 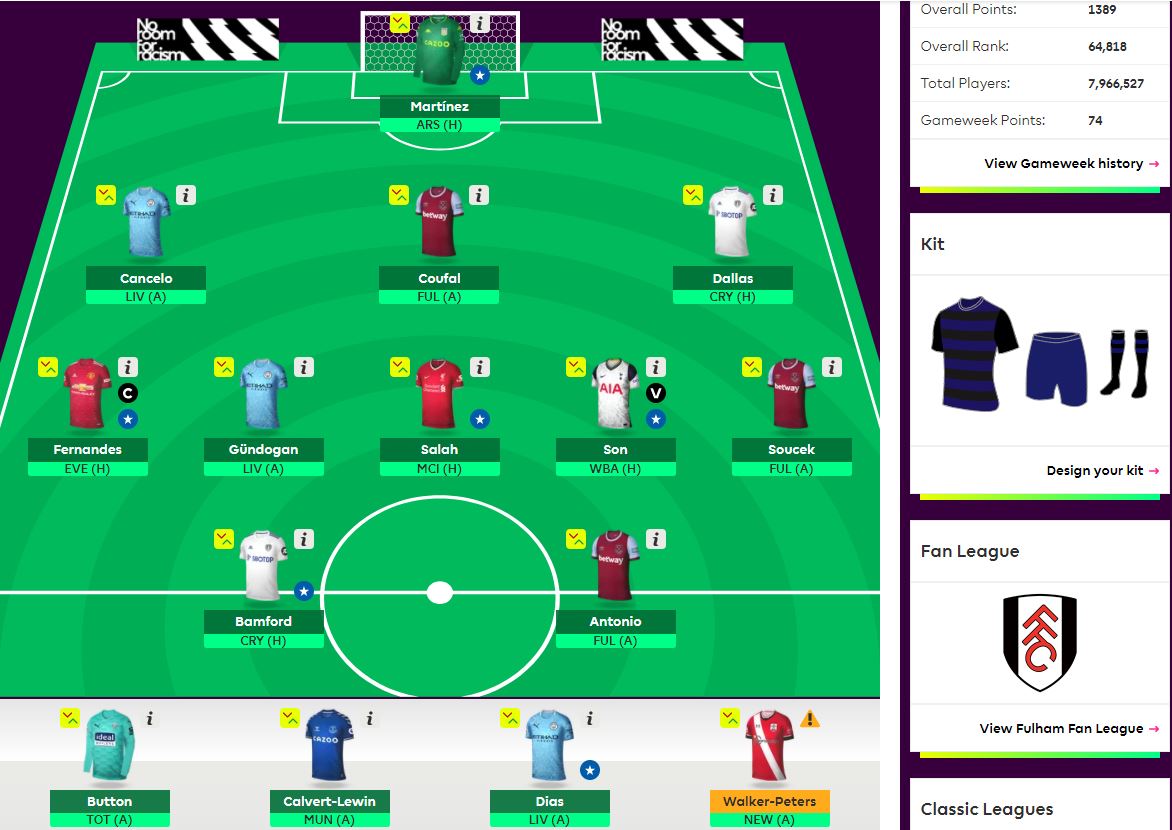