Here’s the points from GW24

So a small red arrow of 1k to 45k overall rank.  A lucky week that I chose Gundogan as Captain and managed to avoid negative points from Dallas

So I have a few issues with the team in terms of injury doubts.  Antonio seems like he will be continually doubtful.  Gundogan also appears to be a doubt.  Calvert Lewin appears like he’ll be available.

That gives me 2 possible players doubtful and Walker Peters out meaning potentially no margin for error.  I’ve pretty much decided that I will do the Soucek to Raphinha transfer and my preference would be to carry over the transfer in case I didn’t Wildcard in GW26 and it would allow me to use 2 transfers to get Kane in.

Ideally I would have used my 2nd transfer to put Ings in for Calvert Lewin but as luck would have it I’m £0.1m short.

So I’ve decided to put Luke Shaw in for Walker Peters to give me some insurance of getting a full team out.  That means I will only have 1 transfer and next week if I want Kane in and don’t wildcard will have to sacrifice Son or another premium and take a -4.  Not something I’m wild on but needs maybe must.  If I do all this I end up with Son out and £5.1m in the bank if it’s Antonio I transfer out.  I could just take Son out now and be done with it and get Ings in for Antonio and Son for Raphinha but with Kane back fit it seems that maybe I should have at least 1 of the pair.  At least Ings plays Chelsea in the first game.  However Leeds are the side that makes strikers look exceptional every week so that will be a stressful game that’s for sure considering howevery one around me is piling in

Now there is talk that the rearranged fixtures could be confirmed today so I’m not going to confirm the transfers now.  I will do so with an update to this post so if you’re interested say.

The main reason to wildcard in GW25 is to use your bench boost in DGW26 as you can’t use them both in the same gameweek.  That means at least 1 Leeds player on the bench who play a single game v  Villa and 2 if it means for some unforseen reason I can’t get rid of Raphinha.  That’s not a particular issue but also I would have liked the fixtures confirmed as well.  This might very well happen but I can’t be dealing with a wildcard last minute and all the possible permutations it will bring.  I’d rather just wait to next week and make a decision then

I’m going to take my life into my own hands and play Pope over Martinez.  Lets hope it’s not another Martinez masterclass for 12 points.

Then I’m going to bench 1 of the City boys to play Calvert Lewin which is against the bookies odds but at least spreads risk a bit.  I’m going to play Antonio ahead of Coufal on the bench

Pretend Soucek is Raphinha and Walker Peters is Shaw 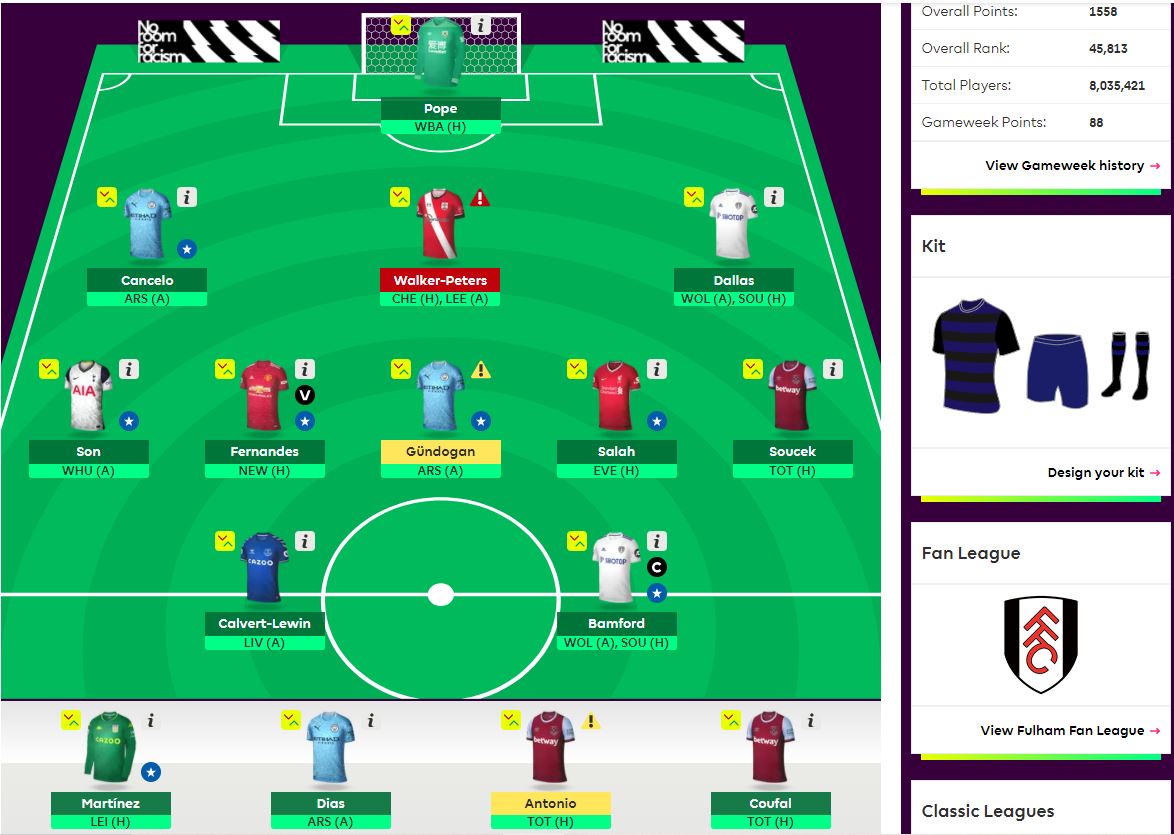