Here’s the points from GW27:

As I said in my early FFGeek team article  I believe I got the theory right but not the result of the Fernandes out Son in transfer.  Fernandes was quiet vs Man City and had 1 shot which was the penalty and 2 low value Key Passes. Spurs walloped Palace as I thought they would but Son failed to capitalise.  The risk was always that Fernandes would get a penalty.  In the end I was 5 points down which isn’t the end of the world.

Some captain fallout from DGW27

Unfortunately the 5 point loss isn’t the end of it. The output I was hoping would come out of the City, West Ham and Liverpool games would mean that Fernandes wasn’t going to be a captain favourite this week.  However lowly owned De Bruyne and Mahrez come out best from the City v Southampton game and Gundogan ruled himself out of any captaincy debate by playing effectively as a CDM.  That was compounded by an excellent defensive performance from City’s next opponent Fulham in their match v Liverpool.  On that subject Salah ruled himself out of any contention for the captaincy with a pretty tepid performance in that match as well.

Luckily Harry Kanes 19 points vs Palace has given Fernandes some competition and in fact as I look at the FFGeek Captain poll now he’s well ahead although it’s close on the other site’s poll with the most traffic.  However Kane’s now yellow flagged after coming off injured in the Europa League.    Mourinho in that link seems confident he will play in GW28 but it’s hard to put too much weight on what any manager says unfortunately in this regard.  Bielsa excepted.

West Ham also made the situation worse regarding the captaincy around Fernandes with a pretty poor 17 shot defensive display against Leeds.  I’ve been a fan of the West Ham defence but despite the clean sheet it was not pretty.  The situation is helped in that Martial and Rashford could both not play vs West Ham which rules out the main penalty targets for Fernandes but it still could be better

A diversion to my Chip strategy

Remember there’s a big blank GW29 with only 4 fixtures in it and a blank GW33 with 2 fixtures missing.

So I have a triple captain and a wildcard to use.  I’m banking on using the triple captain on Harry Kane in the gameweek where the postponed Spurs v Southampton match ends up which should be a double gameweek.  There’s also a posponement required for Aston Villa v Everton but no one in these 2 teams has my confidence for that.

At the moment my thought is to use my wildcard in GW31.  That’s mainly because my existing team has decent fixtures in GW30 and because I will at least know the fallout from any Covid related injuries after the International Break before GW30.

If you’ve got a Free Hit left I guess it depends on your team whether you use it in the blank GW29 or the blank GW33.  If you have your bench boost I’m thinking that your team will tell you when to use it when you can’t decide on which 4 players to bench.

I have 8 players for the big blank week of GW29

The 3 City players.  I have some built up value in all 3 but mainly Cancelo.  Not keen on getting rid of them before Fulham especially as it’s a great clean sheet prospect.

Luke Shaw –  a possible candidate to transfer out but who for?  Maybe Reguilon as he didn’t play v Zagreb

Calvert Lewin – plays Burnley and C Palace in 30 so despite lack of form not keen on transferring him in.

So is Aubameyang v Spurs or Reguilon v Arsenal he best trasfer I can come up. I could just do them both in GW29 if I carry over the free transfer.

What about more hokey kokey?

So after getting rid of Fernandes for Son could I now get rid of Salah for Fernandes?  In terms of fixtures if Fernandes stays then he does have a GW30 fixture against Brighton although I suspect Kane v Newcastle will be the Captain favourite in GW30.  Salah plays Wolves in GW28 and Arsenal in 30 so the fixtures could be worse for getting rid of him.  Salah is my only realistic way of getting Fernandes back btw

It seems totally daft to first transfer Fernandes out for Son and then transfer Fernandes straight back in losing around £0.5m for the priviledge.  But just because it was stupid in the past is not doing it now even more stupid especially when the alternative is Reguilon who’s hardly guaranteed to provide anything significant.

So the choice is Fernandes in and Salah out or Shaw out and Reguilon in or just carrying over the free transfer and leaving it until next week.

Everyweek FPL managers make these 50/50 or 33/33/33 decisions and these are ultimately what govern our rank.  You can do all the analysis in the world but it rarely is enough to mean that you have a totally clearcut answer.  For me with Salah being sold enmasse then I hope the potential downside for me is less bad by selling Salah than it is by not having Fernandes.  However, the likelihood of Salah scoring, at least according to the bookies, is marginally better than Fernandes but I suspect after the sales of Salah this week that the rank damage will be less.

A tricky one here.  As I said the FFGeek captain poll has Kane way ahead but that poll was yesterday morning before the injury news.  Mourinho maybe hopeful but he could still start on the bench.  With no Fernandes the choice is easy for Kane.  Salah vice

The bookies odds did such a stand up job for me last week wth Shaw 3rd on the bench that I’ve done it again.  It’s 3 to go on the bench between Coufal, Shaw, Bamford, Raphinha, Dallas and Lookman.  That’s the order the bookies called them on so that’s the bench.

No question over goalkeepers with Martinez starting vs Newcastle over Pope against Everton. 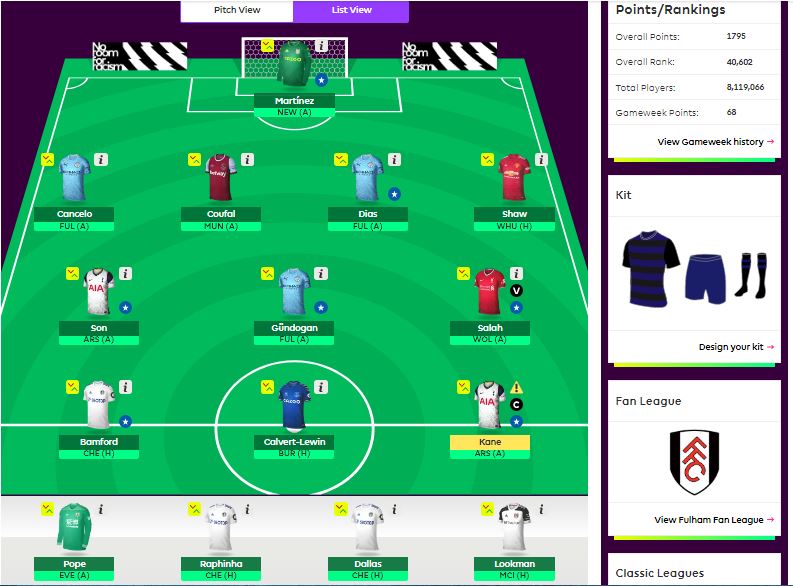