Keith has not used any of his chips

Transfer summary:  Werner out Vardy in

Here’s the team with transfer complete;

GW9 treated me well. With so many wildcards and point hits being used to duck and weave around the injuries and illnesses, having 6 of my assets return while the likes of De Bruyne and Vardy blanked helped me secure another healthy green arrow. A retaken penalty for captain Bruno also played a key role.

That was last week, though, and with Salah, De Bruyne and Vardy all being viable captain picks in GW10, the fact I currently don’t own any of them is going to make for some tense viewing and, potentially, a very steep red arrow.

I have one FT available and, as he’s ruled out, Zaha is the obvious choice for an upgrade. A decent chunk in the bank means I can get either De Bruyne or Salah, which will eliminate one of the aforementioned risks. Of course, I could take a hit to swap Kane for Vardy as well, to further minimise potential damage, but spending 4 points to remove a player who’s 44% owned, has scored 7 goals, and is ranked 1st for both assists and shots doesn’t seem all that savvy.

The plan going in was to bag De Bruyne, but that’s because I wrongly assumed Salah would be out this week. Whichever I go for will probably be my captain as well, so it’s a decision that will likely make a huge difference to my rank.

This call will come down to wire as I listen out for any nugget of information, though at the moment I’m leaning towards De Bruyne. He’s been rested midweek, Burnley’s first choice keeper is confirmed out, and it means I have him in place against Fulham in GW11 when he’ll be a popular captain pick once again.

Transfer summary:  Likely to be Zaha out and De Bruyne in

Here’s the team assuming there’s no relevant press conference news and I bring in De Bruyne. 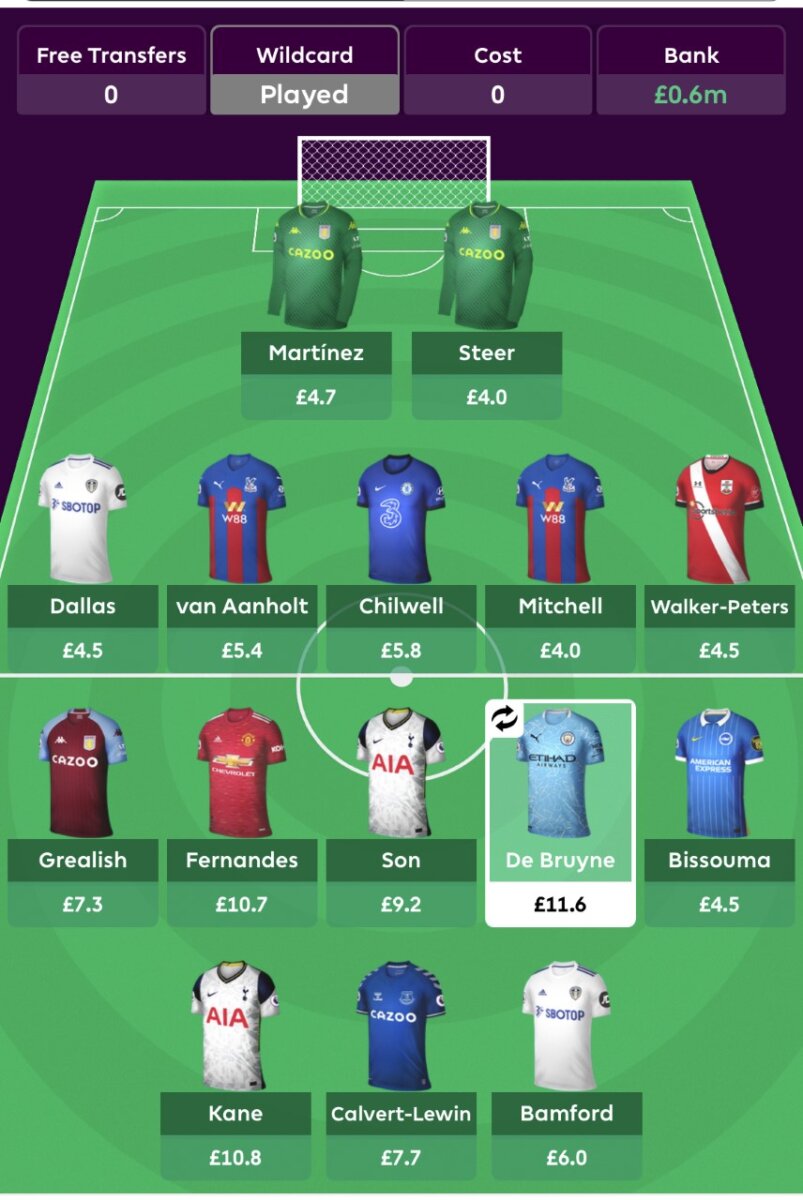 Last week was a good one: not far off halving my overall rank.

I am pretty intent on bringing in Vardy for his incredible next 3 fixtures. For this I am prepared to sacrifice Kane, though it’s a tough call. The tricky fixtures swayed me. For the same reason, my plan had been to take a hit by removing Son in favour of De Bruyne.

However, Zaha’s Covid absence means that I am likely instead to ditch him and use the opportunity to add Jota, who is shaping up to be an excellent value option, to my squad. KDB will wait until next week.

Captain will be Vardy.

transfer summary:  Likely Zaha out Jota in and Kane out Vardy in

Here’s the team assuming these transfers are made:

Rob used his wildcard in GW9

A pretty underwhelming wildcard! Was expecting at least a big haul from Mane to boost my rank but he contributed nothing to any of the Liverpool goals. Rodriguez blanking against Fulham is a worry, I will be selling him after the next 2 games. A surprise clean sheet on the bench for Holding summed up an ordinary wildcard game week.

This week I have no planned transfers as I have used my wildcard to set me up for the next few game weeks. The only slight dilemma I have is which cheap defender to play: Coufal or Holding.
I am currently on Coufal as West Ham’s home form (bar the Newcastle game in GW1) has been good. On the flip side Villa have been excellent away. Then with holding, Arsenal haven’t kept a clean sheet at home all season! I don’t really think either option will get many points to be honest so I won’t lose any sleep from picking the wrong option.

Captain will be Bruno; Southampton away is the perfect game for him. When I look at Man City, I don’t see them hammering Burnley 5-0 like they have the last 2 seasons at the Etihad. I see Bruno out scoring De Bruyne this week so simply on gut feeling I am going Bruno over De Bruyne.

Summary: rolling the transfer (unless the European games throw up any injuries of course)

Here’s the team assuming no transfers re made:

The highlighted FFGeek contributors combined team finished with an overall rank of 52k last season is going ok in 5th place with total points of 548 and an overall rank of 429k. You can follow that team, including live transfers, on our subscription Patreon site. 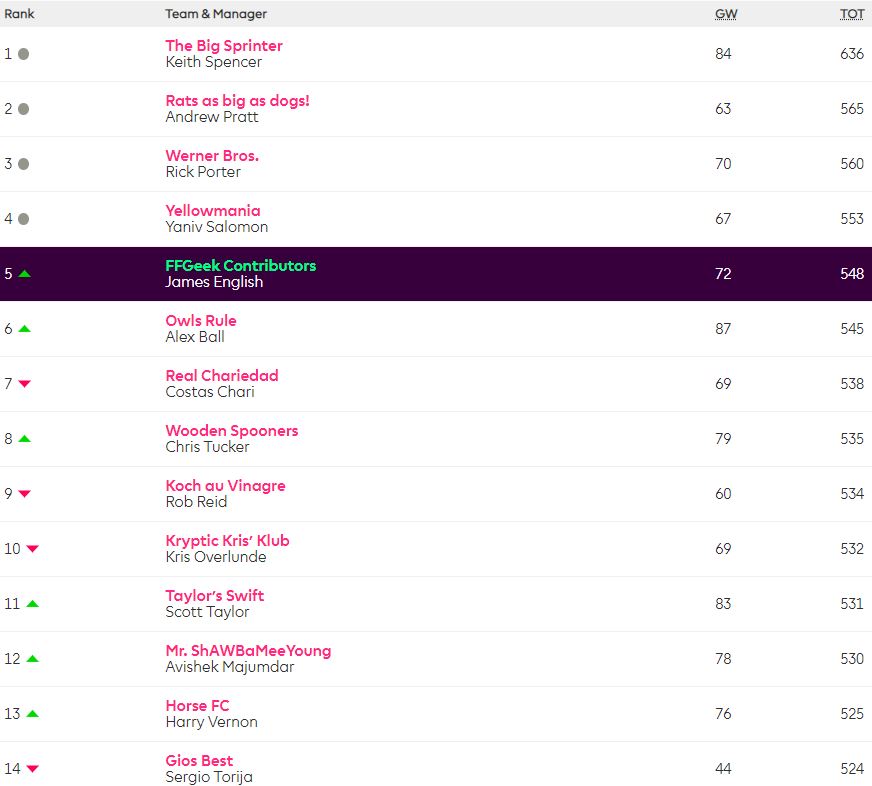 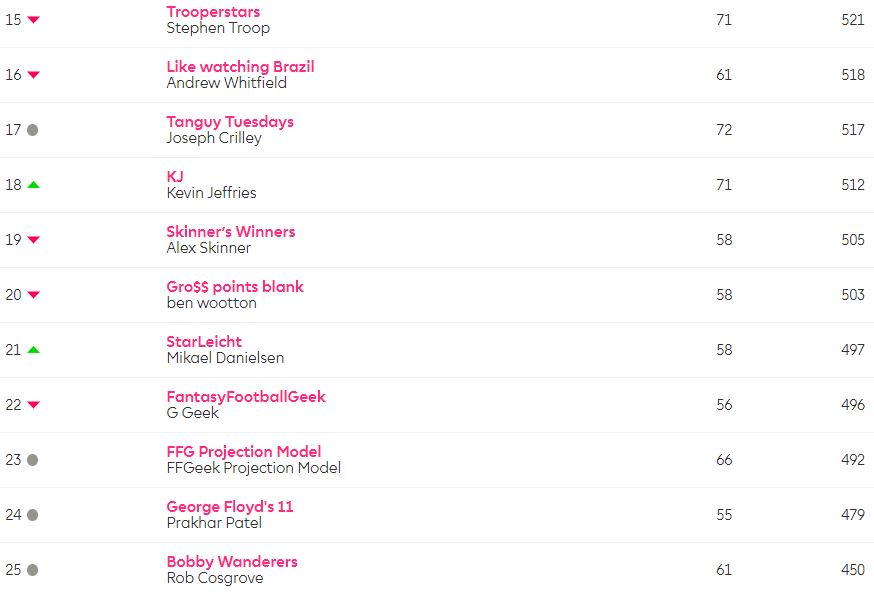