Fantasy Premier League teams GW11 – What we think of the FFG team | fpl.wiki

Here’s our fantasy premier league teams GW11 article where we outline our early thoughts on the FFGeek team for GW11.  We review GW10 and talk about potential transfers, captains and lineups for GW11

Another really disappointing gameweek despite a 214k green arrow to a still lowly 1.679 million

The disappointment was more due to the transfers being a hindrance rather than a help.  I would have put De Bruyne as captain if I hadn’t taken a 4 point hit to get Vardy in.  It could have been so much worse though had Watkins not missed a penalty and then have a goal ruled out for offside so guess that’s something I should be grateful for.

Regular readers may want to skip past this section but this is how I classify players in my team:

Template – 7 of the 10 top FPL Managers I follow own the player or defence.  You can see this in yesterdays 10 top FPL managers article

Bench – a player who will primarily  sit on the bench

Difference maker – the rest.  These will generally give you the rank boost.  Not defined by ownership so not called differentials 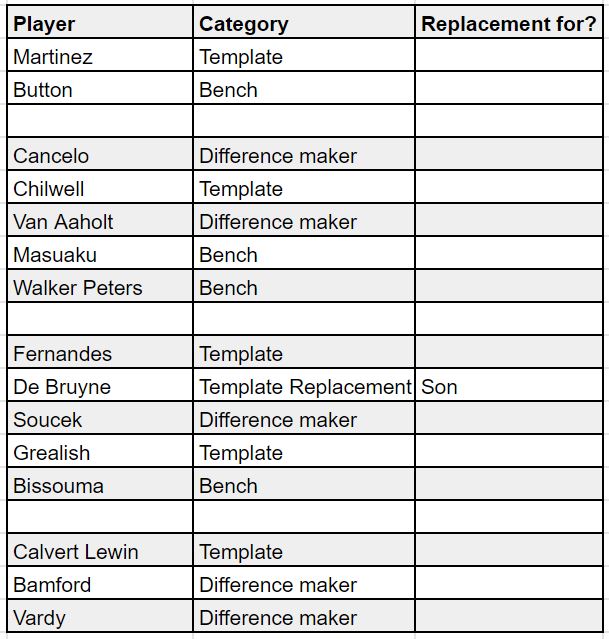 Again my returns came from my template players which are really players to stop you moving back.  My 5 difference makers got 1 assist between them although De Bruyne who is a template replacement for Son got 10 points vs Son’s 3 but even that was of minimal benefit as he was captained by many other FPL managers which worked against me.

Going down with my FPL Strategy Ship

As you can see from my last 4 seasons overall ranks my way of playing has served me pretty well.  This season will be the ultimate test.  Last season I was 1.2m at this stage and finished at 17k overall rank so I’m not in that different position.  Doing it once is 1 thing.  Doing it twice is another.  I’d like to get into the top 50k which at the moment is 95 points away.

If I’m trying to take positives out of this it will be an interesting test of my playing theory.  For this reason I’m pretty relaxed about the current situation.  That strategy in simple terms is to cover the template to avoid backward drops and then move forward through your difference makers.

I do believe that FPL is a game of 50/50 decisions and that as many will go right as they go wrong so eventually you will get those calls right.  For that reason I’m not changing strategy I’m going to go down with my FPL strategy ship and if I need to review it at the end of the season I will.

1 of the FFGeek Contributors who had bad starts have been testament to patience.  Kev in Canada was 3.15m overall rank in GW5 and is now 764k.  He kept his nerve and patience and things turned around for him.  I’m hoping this happens for me.

My plan this week has been to carry over the transfer so in GW12 when Liverpool are playing Fulham I can get Salah into the team.  Likely to be for Fernandes and Van Aanholt who are the fall guys although there is an alternative option of Vardy and Grealish out for a £6m striker and Salah.

So this week I propose to carry over the free transfer.

There is the possibility of the postponement of Aston Villa v Newcastle due to the Newcastle squads Covid problems which wouldn’t be the end of the world but would leave me without a GK.  I could use that transfer to bring in say a £4.5m GK (either Meslier or Sam Johnstone) which would allow me to do the Fernandes to Salah transfer for free with £0.1m spare.  McCarthy would be £4.6m and no wriggle room.  It would be a very annoying postponement though as my GK plays one of the worst attacks in the league.  The transfer out would also mean I didn’t get the benefit of the GK for the double gameweeks later.  Villa already have 1 postponed game as well.  Would I go as far as replacing Button with Meslier and keeping Martinez.  That would solve that problem but mean I would need to take a -4 to get Salah back in GW12.

I’ll probably go for De Bruyne v Fulham.  The vice could be important.  I can’t really risk Cancelo although I’d like it to be a City player given the fixture.  It could be Grealish v Newcastle, Vardy v Sheffield or Fernandes v West Ham.  Fernandes is the most likely vice.

Relatively straightforward.  Bissouma is probably always going to be last so the choice is then to have the 2 West Ham players on the bench.  I probably think there’s more chance of a West Ham clean sheet than Soucek returning but I can make that decision later.

Here’s the lineup prior to any transfers 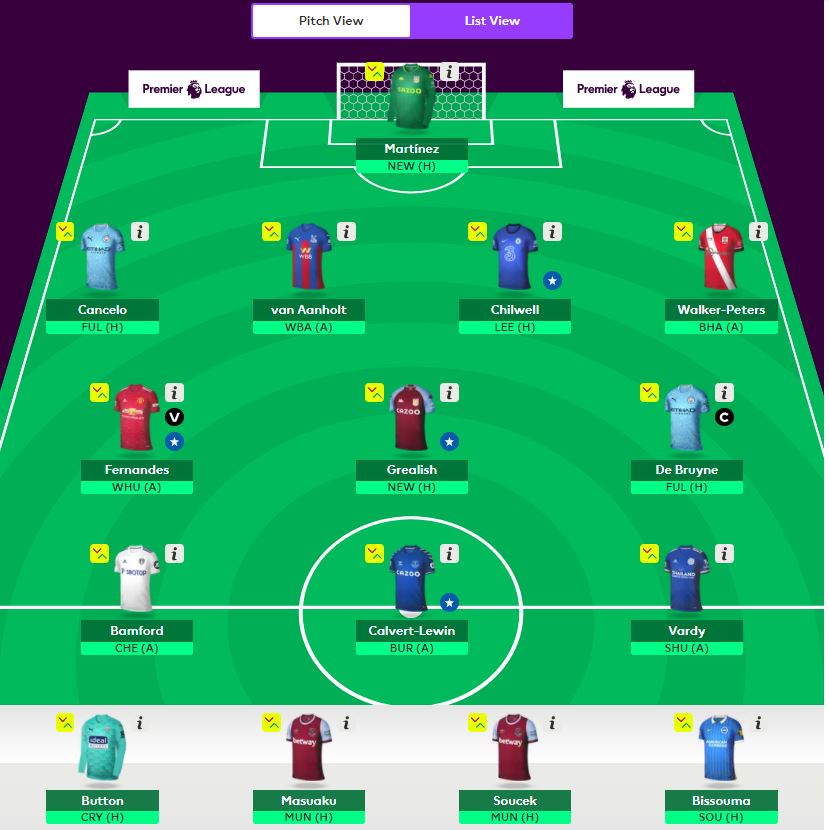 A Guide to Booking Arsenal Tickets to Watch Arsenal

A Beginner's Guide To Twitter Twitter is a social network with some similarities to other social networking sites like Facebook.It can be accessed on...
Read more
Fantasy Football

Downtown Birmingham's Best Activities Birmingham is the second-largest city in England, and one of the largest in the United Kingdom. It isn't the prettiest...
Read more
Fantasy Football

Amanpulo - The Ultimate Secret Among the paradise of islands that is the Philippines, among the choices of escapes around the world, and among...
Read more
Fantasy Football

What Fans Love About Cric Buzz

What Fans Love About Cric Buzz Cric buzz is a site that enables cricket fans to obtain just about any information surrounding cricket. With...
Read more
Fantasy Football

Why Is SkyCards4Europe Is Different From Their Competition?

Why Is SkyCards4Europe Is Different From Their Competition? While searching for the best solution to get a sky subscription for tuning into British content...
Read more