Here’s our fantasy premier league transfer tips GW15 article where we analyse the teams of 10 top FPL managers. These 10 managers have not finished outside the overall rank of the top 10k in the last 3 seasons. Considering how variable the last 3 years have been this is remarkable consistency and shows an ability to adapt strategy in different seasons. It also gives you a view other than my own on strategy and player selection.

There were 10 green arrows and 0 red arrows

The average points score in GW14 so far was 84

The average overall rank of the top 10 FPL managers was 212k. That’s 159k better than last weeks average of 371k

The median overall rank was 72k

Lamptey is in 7 of the 10 FPL managers teams

Dallas is in 6 of the 10 FPL managers teams

Robertson, C Taylor and Forster are in 5 of the 10 FPL managers teams

Justin, Dias, and Steer are in 3 of the 10 FPL managers teams

Liverpool, Burnley and Southampton are represented 5 times in the 10 FPL managers teams

Salah, Fernandes and De Bruyne are in 9 of the 10 FPL managers teams

Son is in 8 of the 10 FPL managers teams

Grealish is in 7 of the 10 FPL managers teams

Bissouma, Lookman and Soucek  are in 2 of the 10 managers teams

Calvert Lewin is in 6 of the 10 FPL managers teams

Wilson is in 3 of the 10 managers teams

2 managers carried over the free transfer

Charlie Taylor was transferred in 5 times

Bruno Fernandes was transferred in 2 times

Kilman was transferred out twice

No player was transferred out more than once

9 managers have used their wildcards to date.  1 has used his triple captain chip

No managers used their wildcard in this gameweek.

The top 10k favour the following players over the top 10k

The Brighton defence is also represented 7 times but will be on the FPL bench often so could be excused from the template.  Leeds have 7 defenders although 1 is Douglas who’s on loan at Blackburn so I haven’t counted him.

Top scorer so far this week is our very own FFGeek Contributor who is part of the 10 top FPL managers in Yaniv Salomon.  His score so far is 96 points.

He has 7 of the 8 template players.  He doesn’t have Son.  He has no direct or indirect replacement. 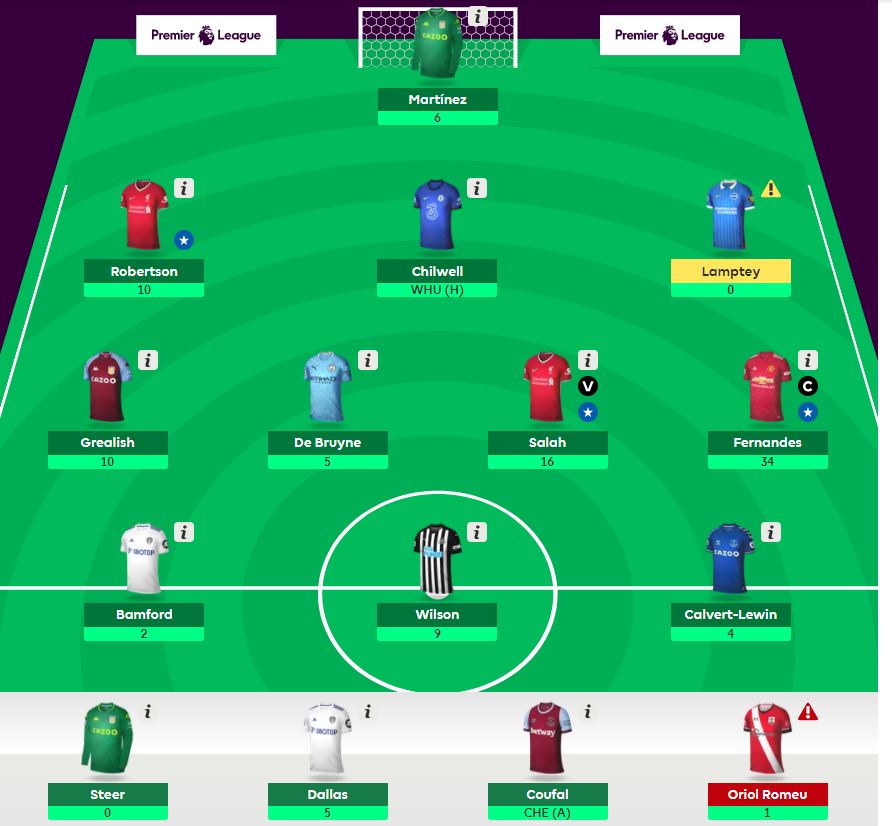 Here’s a team which tries to make a combination from the most represented players. Please note that it is meant to be a menu of players to help you choose your transfer rather than a realistic team and it’s value is not necessarily achievable.  This week it is definitely not achievable at £107.7m 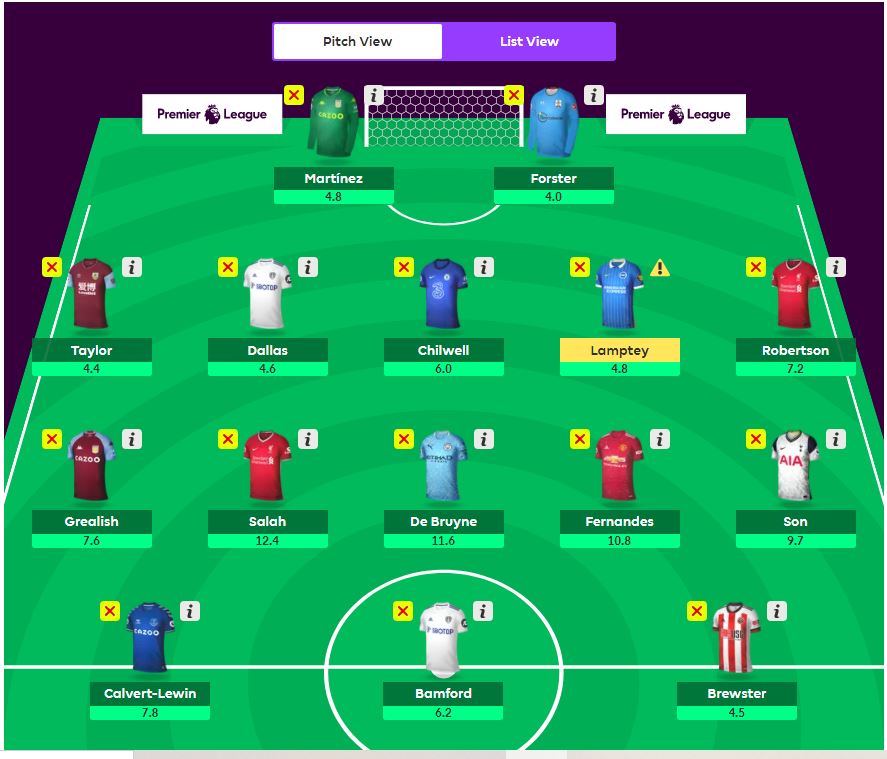