Now Blank GW18 and double GW19 are official, here’s my initial fantasy premier league double gameweeks and blank gameweeks article where we outline a potential schedule for both to give a wider view of what’s upcoming this season.  There’s also some initial views on navigating them

Firstly I’d just like to say that I’ve worked this out by going through the various fixture types and making some assumptions. I don’t pretend to be an expert. So any corrections or thoughts are definitely welcome. Please put them in the comments section below.

The split of fixtures between GW18 and GW19 is a manufactured scenario to placate the TV companies so the likes of Klopp etc can be assured of continually having mountains of cash thrown at transfers while they complain of fixture scheduling.

It’s a very simple schedule which outlines all the fixtures on a gameweek to gameweek basis to establish where the doubles and blank game weeks could be.

Double gameweeks result from when the postponed fixtures are moved into midweek of a future gameweek meaning some teams will play twice in 1 gameweek.

By loading up on those double gameweek players or planning for blank gameweeks in advance to maximise your FPL teams playing numbers and you can potentially gain a significant points advantage.

This season Covid has created a further layer of postponements

The biggest assumption is that UEFA keep to the rule that postponed domestic games cannot clash with European Matches irrespective of whether English teams are playing or not. This has been relaxed in the past but only on the odd occasion. These rare precedents involve games on Mondays or even games clashing but played earlier in the day. So nothing is guaranteed.  The fixture congestion around Covid should allow this to be more flexible.

This flexibilty should alleviate the problem that comes if there is 1 team that’s in the EFL final and the FA Cup quarters and the FA Cup semis. Then there aren’t enough non European game free slots to put postponements into.

My knowledge gap is that I don’t know time periods for notice of postponements which could be relevant to where they are placed.

How the schedule works

The schedule outlines each week of the season identifying PL, EFL, FA Cup and UCL/EL matches to identify which PL matches will need to be postponed and where there are gaps that will accommodate those postponed games.

Each week is broken into gameweeks.  The 2nd Column gives you dates.  The 3rd column shows whats in between and the 4th column is where they could squeeze in existing postponements if the teams aren’t already represented. 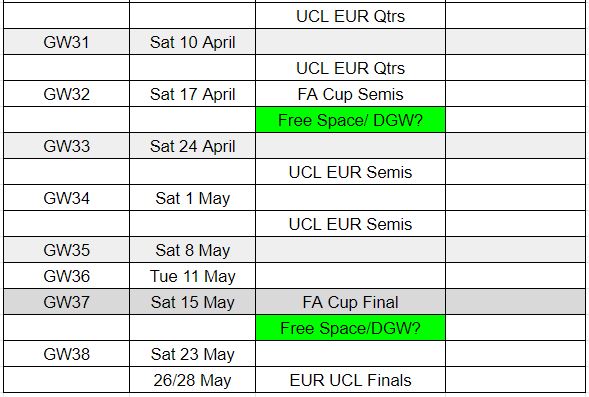 There are a few games that are existing postponements due to the late start to the season for those teams and Covid related postponements.  There are:

There was potential between GW14 and GW15 but the EFL quarters have at least 1 of the teams above in each fixture involved so it doesn’t fit. 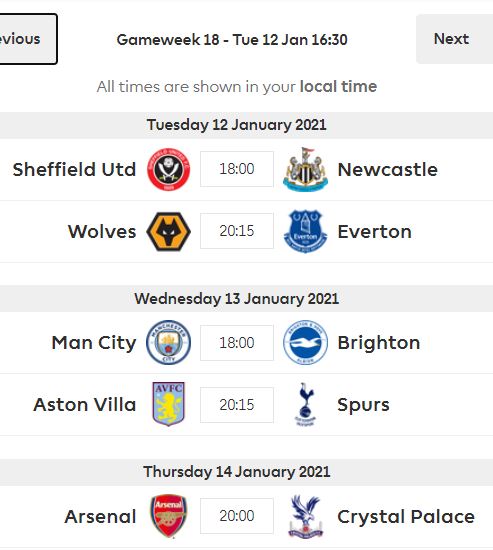 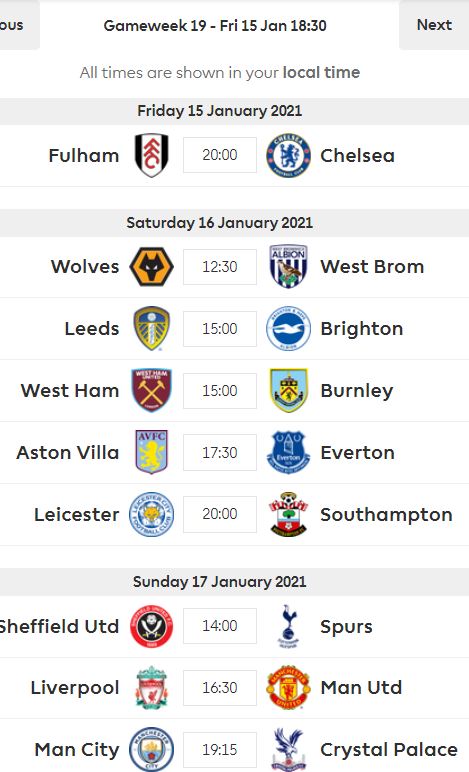 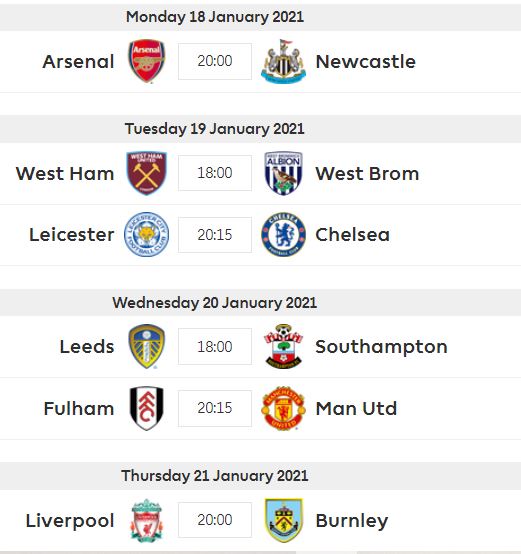 How you play these will depend on your team.  If you’ve used your first wildcard one of the theories is that you free hit in GW18 to cover the blanks having prepared for GW19 through transfers from now on to maximise the players playing twice.  This could involve the bench boost as well.

If you’ve got your first wildcard you can use it at the last possible gameweek ie GW16 set up for DGW19 and use the free hit for GW18 so as to allow that GW19 maximisation.

The EFL Cup final should see the finalists matches put into midweek.  Assuming no clash then the existing postponed games could be put into there

The International Break after this gameweek will prevent the quarter final Premier League related postponements being shoved into midweek so it will be a blank gameweek depending on how many Premier League clubs make it and how that squares up with the fixtures.  There’s a while to go before that’s clear.

The FA Cup semis affected PL games could just move to there but it’s one opportunity to dump the FA Cup quarter postponements there.  This is a traditional 2nd wildcard teeing up a bench boost target

As for the above the FA Cup final affected PL games could just move to there but it’s another opportunity to dump the FA Cup quarter postponements there.  This is the other traditional 2nd wildcard teeing up a bench boost target.

I and the Contributors will integrate their thoughts into the future team articles this week or do separate articles as well.

In the short term the decision to free hit in GW18 or later on in GW29 is the first thought.  If you’ve used your first wildcard then the choice is to use the 2nd for GW19 or later on for the FA Quarters dumping into GW32 OR 37.

As I’ve said I have no special knowledge it’s just trying to think everything through.  So please correct me if I’ve got something wrong.  It would be nice if that’s done in a constructive way!