You can hear Stephen on this weeks FFGeek FPL Podcast

I built up to DGW26 to use the bench boost with 14 doublers with the hope of a good rank jump but unfortunately that hasn’t come into fruition.

The main reason for the small rank climb I think is the -8 I took not really getting profit. I took out Walker Peters (0), Grealish (0) and Bamford (2) which is good however for Barnes (1), Pereira (2) and Kane (8, 16 with captaincy) so profit is minimal. The bench boost was saved by Shaw’s 12 points.

I’m now in a planning phase for GW29 as I don’t have a free hit. Barnes needs replacing, and it needs to be someone playing GW29. I have 0ITB and can take a punt given I’ll be wildcarding after 29.

Options I’ve considered are Traore, Saka, Lingard, Willock and Raphina however I’m probably going to take a punt on Trossard. Like most of Brighton’s attack their xG is decent over the last few, and Trossard’s is better than the others I’ve mentioned. His next 3 fixtures are fairly good. If they can convert some of these chances then someone could be due a big haul. There is a risk of rotation with a Potter team however so I may waiver.

Captain Gundo, vice Kane. No real benching dilemmas but a Shaw clean sheet in 3rd place is possible given their record against the top teams this season.

I’ll have 2 more FTs before 29. Son will be a priority and likely Regulion+Antonio my other targets for a hit (although Aubameyang will tempt me instead of Antonio). This will get me 9 playing in 29

Transfer summary:  Likely H Barnes out for Trossard in

Team prior to the Barnes transfer out

I missed the FF Geek deadline last GW so can include a double write up this article. It would be great to get some feedback on my articles either through twitter or in the comments.  Especially if there’s anything you’d like me to include each week

The Monday night game between Leeds and Southampton showed the good and the bad of my GW 25 team.

I had gone for 5 DGW players.

McCarthy (3) and Adams (3) both blanked. Waiting in the wings were the benched Pope (8) Dias (7) and Antonio (7) who had outscored my Southampton players despite only playing a single match.

All in all, I was relieved and pleased with my GW and another green arrow, my second in the row. Fingers crossed; this marks a change of fortunes following 5 consecutive red arrows.

I have enough players for DGW 26 and BGW 29 so I will save my final WC for GW30 and hopefully a strong run in.

I couldn’t see a better opportunity than GW26 to BB. Triple Leeds were the only single game players and they had a home match against Villa.

With the BB out of the way, I will be able to me to concentrate my funds on a strong first 11 without having too much money on the bench.

I had 2 FTs and, in the end, decided to swap Adams out for DCL but needed to raise some funds. So Robo made way. I also brought in Martinez for McCarthy which means I am in the happy situation of not having any Southampton players in my FPL team. I also got in Digne who has 2 great fixtures.

McCarthy, Adams and Robo went out for Martinez, DCL and Digne.

My bench boost went well and I scored 117 (-4) which pretty well halved my overall rank.

The defence did superbly well, netting me 5 clean sheets, 2 goals and 10 bonus for an insane total of 66 points.

Son (14) was my only attacking playing gaining a double score. With Bruno © Gundo, Mo, DCL and Bamford all blanking.

My plan is WC on GW30 or 31. I have triple Leeds and they have a great fixture at home to Sheffield United in GW30 so I am tempted to hold. Spurs who also play in GW29 travel to Newcastle which is enticing. Man City play Leicester that GW too and if they win, I suspect they will rotate even more in the league. So WCing out Man City assets will be on the cards.

The postponed match between Everton and Villa may be replayed in GW 28. I suspect it is cutting it fine but I would hate to get rid of an Everton or Villa asset and find out there is a DGW.

Currently I have the following players with fixtures in GW29

I can use my 3 FTs to get a maximum 9 of players which seems ample.

It’s very hard to see who the sell.

I won’t get rid of the 6 who play in GW29 nor my 3 City assets. There’s a chance that Martinez, Digne and Calvert Lewin have a DGW in 28 and it would be folly to sell them.

Mo is off form. He has only scored 4 and not even assisted once in his last 13 matches and was brought off early against Chelsea. He could be for the chopping block to get KDB in and give him the captaincy. However, Liverpool has reasonably kind fixtures next 2 GWs home to Fulham and away to Wolves, who have not been defending so well. I will wait to see what Klopp has to say today and Mo may get a reprieve. If not Mo, then that only really leaves Shaw. I could swap him for Targett who has a better GW27 fixture and plays in GW29. The other option is to hold. 2FTs in GW28 would give me more flexibility.

Let’s see what news today brings, but I will do one of the 3 options:

Option 3 is the probably the most likely.

The options are between my 3 City players or Son. At the moment I am hedging towards Gundogan as he only played 8 minutes midweek and still managed an assist.

The benching options are between Raphinha and Bamford. I need to play one of Digne, Dallas and Shaw. At the moment, I am on Raphinha and Dallas.

Good luck everyone and keep safe.

Transfer summary:  See above but possibly carrying over the free transfer 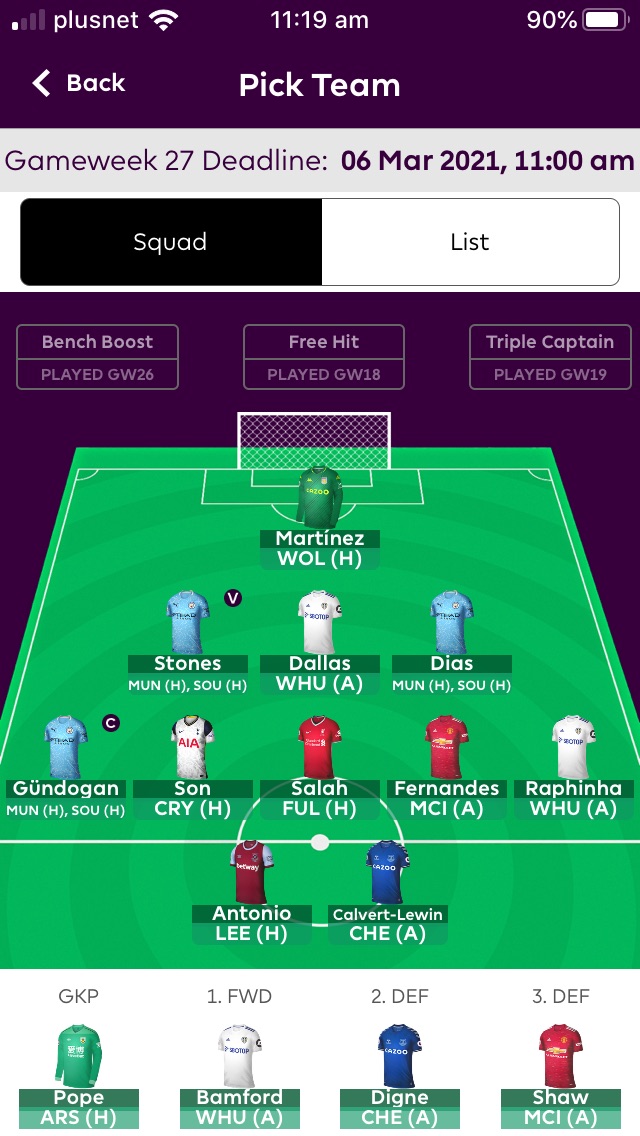 Costas has used his Triple Captain and Bench Boost Chip

55k green arrow and the highest rank of the season so far (yes that’s how bad its been). I should be thrilled but to be honest i expected more from the team on paper. Most players blanked and Barnes who I got in for a hit got one point.

Looking forward… As I outlined before my plan is to go through gw29 without using the FH and I will wildcard gw30. FH to be used gw33. If I manage to be withing the top 100k by gw30 it will be great for a late comeback season.

Barnes long term injury pushed me in taking a hit again. Its Maguire and Barnes out for 2 gw29 players who also have good fixtures until then. Its Reguilon and Trossard….. Yes Trossard. I am taking a punt. Brighton need a bounce back in order to avoid relegation and have been rested for a week now. They play a not rested injury hit Leicester side home followed by an off form saints and then gw29 one of their games of the season at home to Newcastle.

…. Players added until gw29 will be Dunk and Aubameyang btw

Captain this week is between Sterling and Kane but currently on Kane. I fear Sterling might play the united game and then get rested vs Southampton.

Transfer Summary:  Maguire and H Barnes out.  Reguilon and Trossard in

Here’s the team with transfers made

Another captain failure, offset somewhat by Kane not exploding feel like I got away with one there and a green arrow. Salah and Fernandez carrying a lot of money in midfield but not delivering any returns is a concern. But 1 I will not be looking at for now, these guys are elite players for a reason so I’m not doing anything drastic right now until GW29 is out the way.

Looking at GW29 and I have 8 players so far so can field 11 with no hits although 1 of those is Holding who has been rotated recently. I need 1 defender and 2 midfielders but the choices are slim. There are a few players floating around in my head so get such as a Brighton defender, Fulham defender, Lingaard, Trossard, Bale, Grealish (if fit). None of them have ideal entry points this week except for Bale but I feel he could be rotated after starting the last 2 in quick succession, and Lingaard but he is illegible in GW28. Therefore I’m going to roll the transfer for now and re-evaluate next week.

Captain seems an easy 1 this week with Man City playing twice it has to be Gundogan and just pray he starts both games. My bench is a problem however, and I’m going for the bold decision and f benching Fernandez! Seems to break the rules benching a premium but I just don’t see him doing anything against Man City and all my other attackers look likely to return.

The highlighted FFGeek contributors combined team finished with an overall rank of 52k last season is going ok in 5th place with total points of 1,747 and an overall rank of 18k. You can follow that team, including live transfers, on our subscription Patreon site. 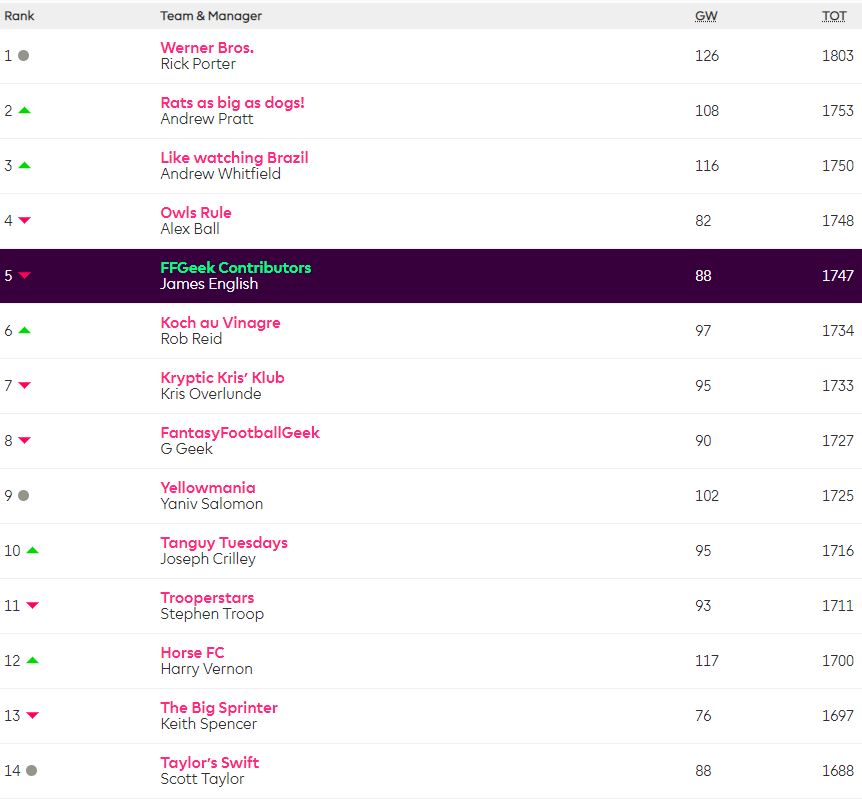 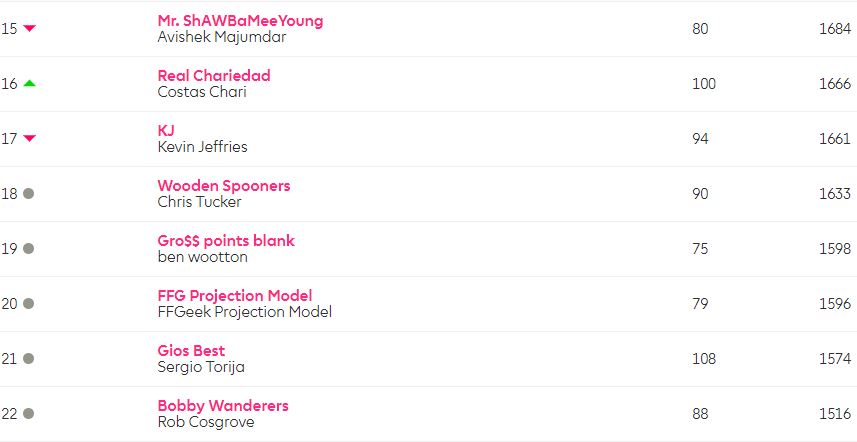