Frustratingly I once again fell on the wrong side of the popular captain picks. The Bruno haul plus a 15 pointer from Justin all but guaranteed I’d be seeing red this week. Fortunately, good performances from almost all my players did a solid job of limiting the damage. Time to look forward, though, as things are about to get interesting…

We now have small doubles in GW24 and GW25 on top of the large double GW26. The next few weeks could well make a huge difference to the Fantasy season, so each transfer needs to count. I currently have three City players for DGW24 and, despite it being unlikely all three will start both matches, I’ll not be wasting transfers trying to better predict Pep. I also have Calvert-Lewin who, considering his 40% ownership, is must-own for me if he plays twice. So that’s 4 double players already and 2 remaining FTs to best maximise the opportunity.

It seems Chilwell is out of favour, so he’s an obvious swap for a defender who plays twice. Digne or Mee are probably the best options, with Mee is far friendlier on the wallet. I’ll need that cash if I don’t Wildcard in DGW25 as I’ll want to bring in Ings for his double.

Of course, whether I Wildcard in DGW25 or not ultimately depends on how DGW26 ends up looking, and that’s information I don’t have yet…

It’s probably best for me to roll my transfer this week. However, I’m in an odd situation where despite it being difficult to decide who deserves to be benched, I could easily end up fielding 10 men if the cards fall badly for me. With Chilwell probably out, 3 unpredictable City assets, and a fragile Antonio facing his third match in a week, this could easily turn into a horror show. And those are just the known issues…

As it stands, I’m happy with the risk and rolling the transfer, but if I get spooked I may sacrifice my flexibility next week for extra protection now and switch Chilwell to Mee early.

As mentioned above, there’s no obvious bench this week. My better players are against tougher opposition while my weaker/more doubtful assets have the favourable fixtures. I’ve done lots of mulling, but here’s where I’ve landed….

• I’ll have Chilwell on the pitch just in case he starts against Sheffield.

• First bench position is between Gundogan and Calvert-Lewin. It’s close, but Gundogan is on pens so I’ll likely play him and bench DCL.

• Despite what happened against Brighton, I’m not fully comfortable with double defence against Liverpool, so Cancelo is second on the bench. With Chilwell likely to miss out, he’ll probably come in anyway if he gets minutes.

• Coufal will be in last position.

• Martinez has the tougher fixture, but he’s performed so well I can’t bench him. McCarthy just let in 9 so he stays on the bench.

Yet another difficult decision. Son seemed the obvious choice until his poor performance this week. Will Kane be back? Who knows? Right now I’m favouring Bruno, but it could be either.

GW23 The team, Chilwell out and Mee in (especially for the DGW24)

Transfer summary:  Chilwell out and Mee in 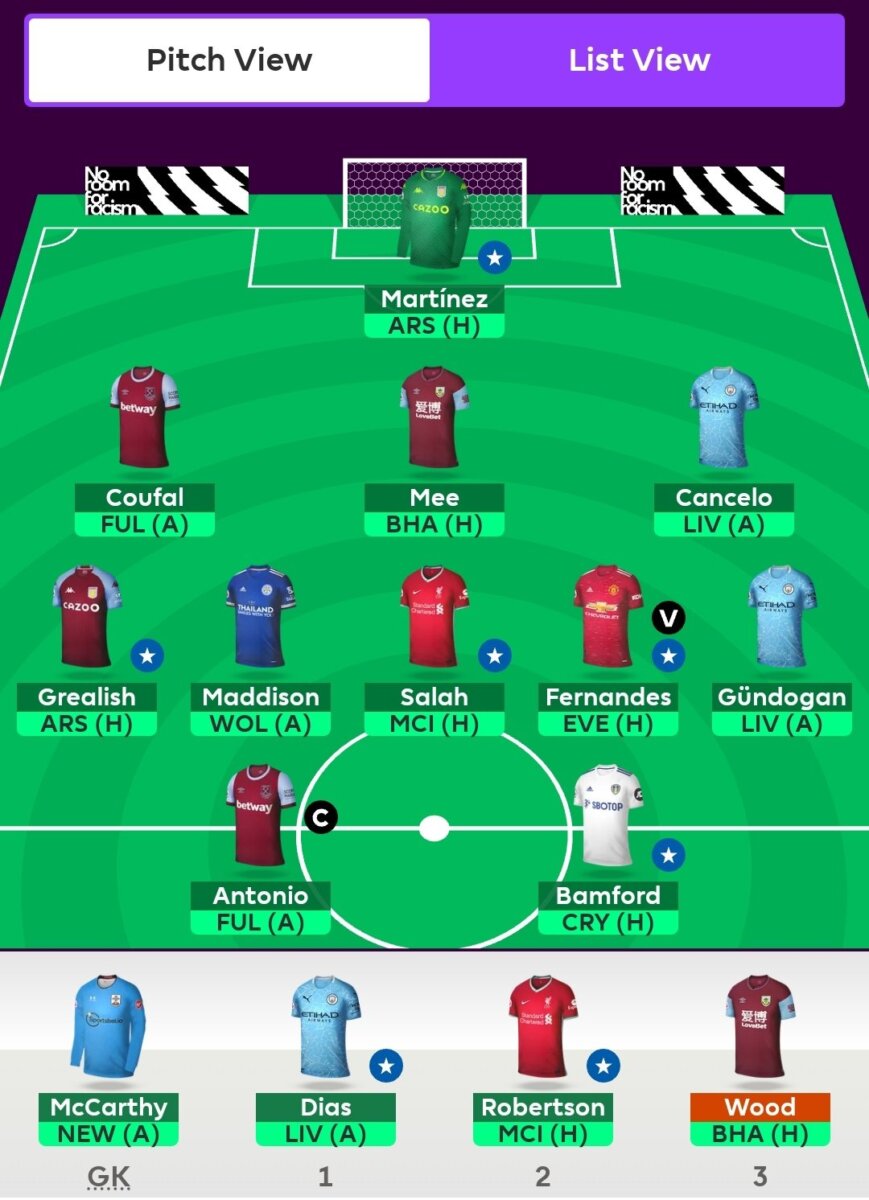 An unexpectedly great weekly 92! Up to 27k

All my players returned (except my captain!!) which was a pain but I can’t complain.

This week is really tough, 2 frees and I’d like Son ideally  but can’t justify selling any of my mids especially after Sons performance v Chelsea.

So I’m pretty set now on McCarthy to Pope and swerving Son.

transfer summary:  McCarthy out to Pope in likely 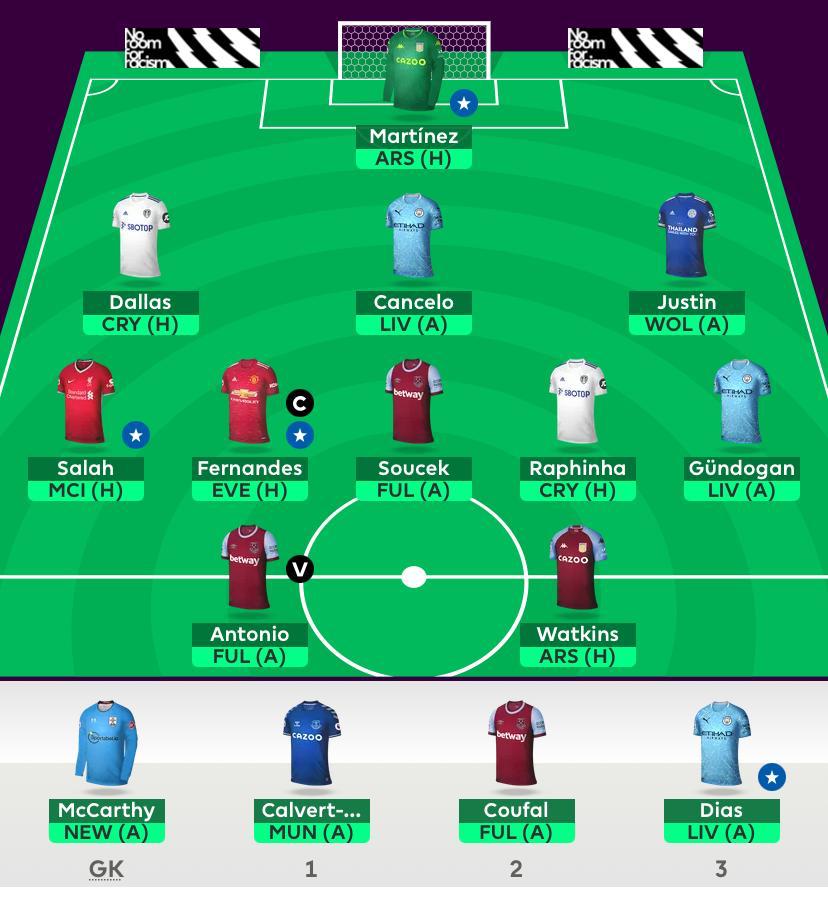 I had a small green last week. Have 2 frees this week and will be wildcarding in GW25 for BB GW26. Brewster will become Bamford this week. Might do a second move or not.  Was pretty settled on doing Mahrez to Son, but I was put off yesterday. Next week will definitely do Johnstone to Pope.

Transfer summary:  Brewster out to Bamford in.  Bamford captain

Here’s the team prior to any transfer being made.  Brewster will be Bamford 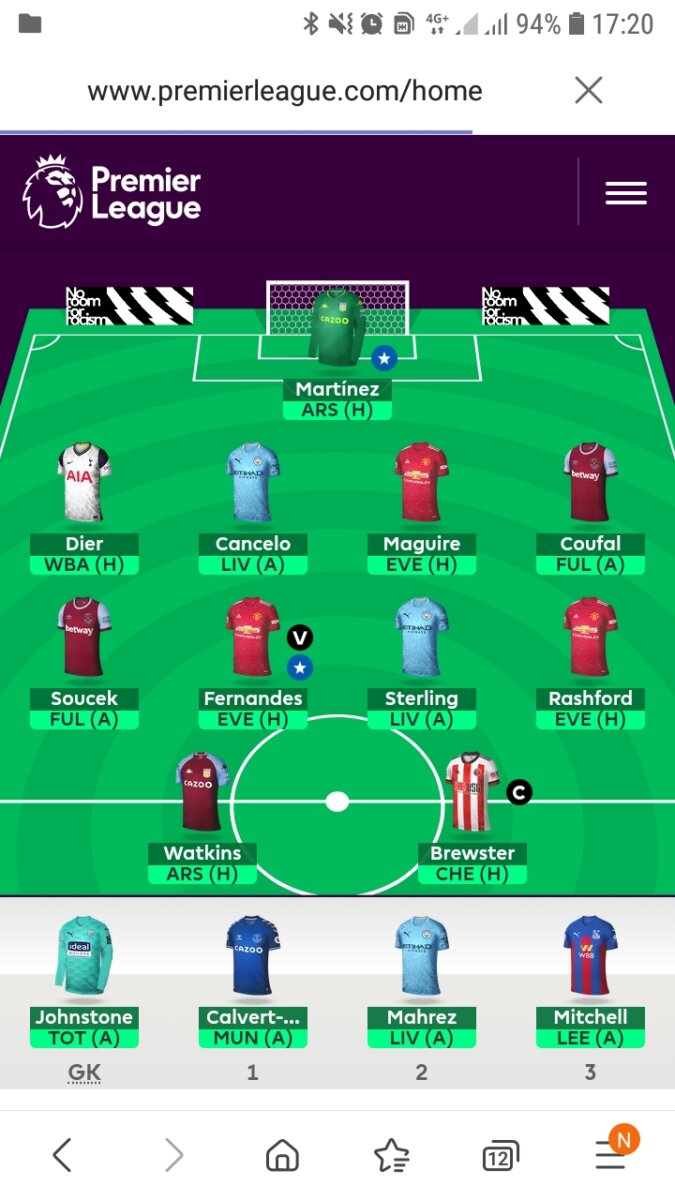 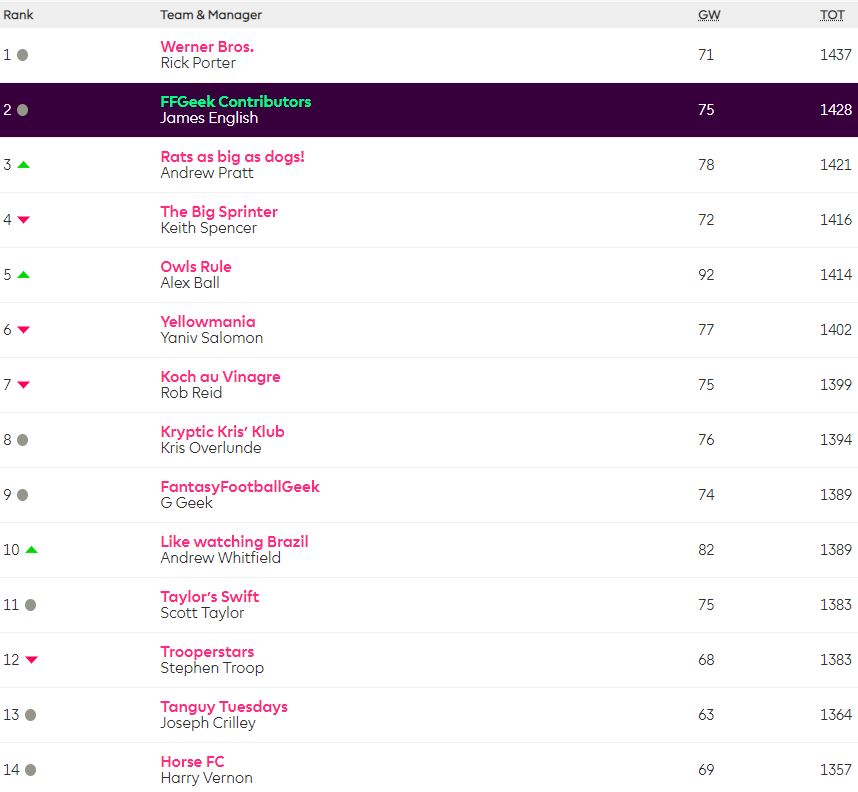 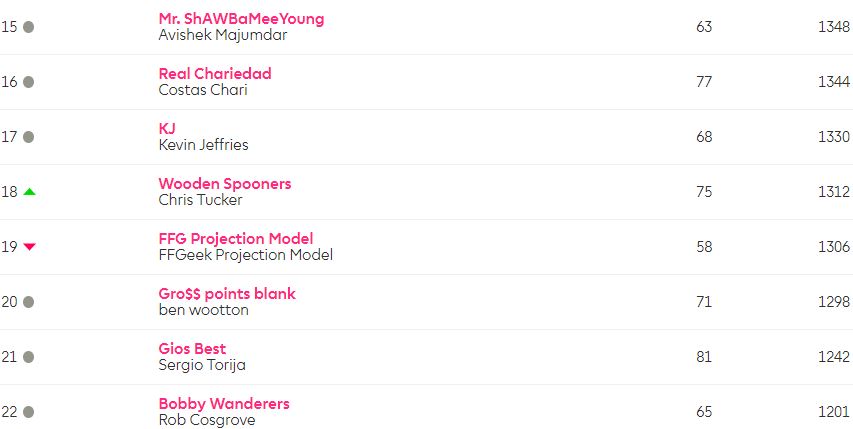