Rick has used all of his Chips

There are still matches to be played as I write this, but so far I’m pretty happy with how this week has gone. All the big bullets have been dodged apart from Calvert-Lewin’s last match, so I’m hoping he stays quiet again and Kane adds to his tally. My Bench Boost has got me 16 points so far, which feels like a victory even if it’s not the most stellar use of a chip. Hopefully that will be added to this evening.

Looking ahead, I want to roll my transfer this week. My chips are now gone so I have zero safety nets and some very awkward weeks ahead. If I only use 2 of my next 3 FTs to get 9 starters in GW29 then I might still be able to hold my own against the those using Free Hit as long as I cover the key players. I can then use 2 FTs and a -4 in either GW30 or GW31 for a mini-wildcard to keep pace with the big-wildcarders and set up for the final stretch.

Of course, all this is reliant on having no urgent fires to put out over the coming weeks, which seems unlikely.

Regardless of rotation risk, my captain will be Gundogan. I’d prefer De Bruyne, but that would mean wasting transfers, money and points swapping premium assets around.

An ok week so far, disappointed with triple captain Kane only getting six points, as I write this, in a four nil win. Fulham will be a harder game so I’m not feeling optimistic. I realise now I should have wildcarded in 25, avoiding my -8 and getting a better team for 26; notably getting Calvert Lewin who I fear will make me pay v WBA.  Additionally I could have had more players for the possible Everton and Villa double in 28.

In terms of GW27 I plan to roll my transfer and hope my Leeds assets perform away to West Ham. Captain currently Kane, though I’d be happy to choose a City player if I had confidence they’d play both games.

Scott has used his Free Hit Chip and Bench Boost

A disappointing GW26 and bench boost for me so far (this is being written before Thursday’s games). I’ll be happy to maintain my overall rank by the end of the game week.

I am planning to carry my transfer over this week as I can just bench Barnes and have 2 free transfers next week to sort things out prior to the blank game week in GW29. I can afford 1 price drop on Barnes before I start losing money so rolling my transfer seems the sensible thing to do.

I currently have 5 players for GW29 (Martinez, Dallas, Raphinha, Bamford and Kane) and three free transfers before the game week. My plan is to WC in GW30.

Players I’m looking at for the 3 transfers before GW29 are (in no particular order) a Brighton defender, a West Ham defender (Cresswell if funds allow), a West Ham attacker (Lingard and/or Antonio), Son, Grealish (if he’s fit), possibly Watkins, Saka and Lacazette (although I’m put off Arsenal due to rotation risk – I want certain starters in a blank game week).

Captain this week will be between Kane and Gundogan. Currently on Kane. 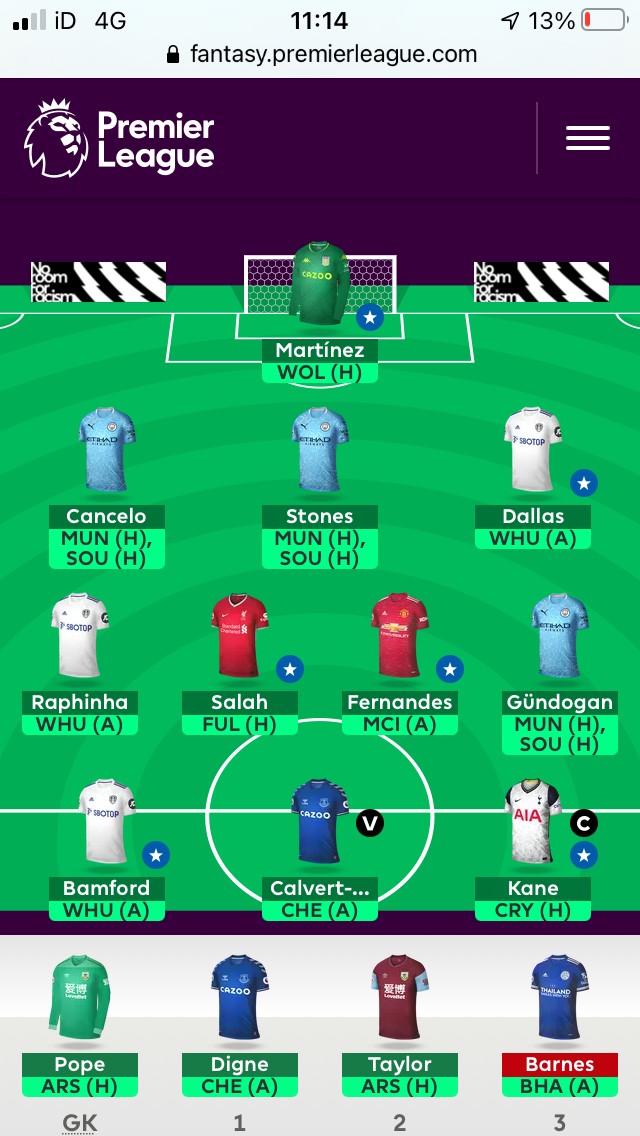 Slightly nervous having not played TC or BB and with Bruno cap. However not dropped back too much so feels OK at mo so it’s just Kane v Fulham to go.

Transfers wise I am not sure I am making a move yet. I think it may be wise to carry one but it remains to be seen.

I have potential issue with McCarthy in goal, he was on borrowed time already but its less of a concern with wildcard pending in next few weeks and Pope is on bench.

At the back City rotation remains a risk but a DGW so no changes needed.  Robbo vs Fulham a decent fixture.

My midfield is Gundogan and Co, it makes no sense to move any on.

Cap Salah vice Son at mo.. Very much a wait and see. Been burnt on a Son captain before. Man City have two games so might consider one of them, but one game vs Utd and that might be another
0-0.

Transfer summary:  Likely to carry over a free transfer