Andrew has used his wildcard

I recently brought in Vardy as a short term punt and had planned to move him out in gameweek 11 to facilitate the transfer in of a big hitting City asset for their juicy game against Fulham. The calling off of the Villa game complicated things in that without Grealish and Martinez I was facing putting out a very weak team in gameweek 11. So Vardy stayed and out went Grealish (his doubles don’t sound imminent so I will trust I have time to get him back in for those) for Jota (excellent value if he continues to get minutes and a great gameweek 12 fixture) and I also made a swap of de Bruyne in for Salah, after I heard a last minute rumour that Salah may be rested. Salah ended up matching de Bruyne and Jota didn’t start so the 4 point hit was ultimately wasteful. Double City defence surprisingly helped me to a green arrow. At the start of the season I’d have been happy to be within 300k OR at this stage.

Ziyech sounds like he’ll be out for a while so I’ve used the opportunity of moving him out for Salah (who should feature against Fulham this week) and downgraded Vardy to Welbeck (reasonable form and decent upcoming fixtures). This is my 5th hit of the season

Barring any significant injuries, this week I’ll likely go with Salah on the captaincy and de Bruyne as vice. I’m currently undecided on which defenders to start. I’ll trust that my bench can cope with any injuries incurred during the week.

Importantly, it is now time for committed FPL managers to get a strong understanding of the upcoming doubles and blanks. Our transfers over the next few weeks will be informed by our strategy going into those, and whether you have your first wildcard in hand. Joe’s transfer planner could save you a lot of points over the upcoming period. Also, with the upcoming extremely busy period and threat of further covid disruptions, a decent bench may prove useful.

transfer summary:  Ziyech out Salah in.  Vardy out Welbeck in

Here’s the team with transfers confirmed:

Joe has used his wildcard

Have made 2 free transfers early for GW12 for price change reasons as hope for relatively stress-free week with most of top clubs already qualified from their European groups.

Couldn’t resist Salah as captain with Kane sacrificed instead of Bruno Fernandes/De Bruyne!

Here’s the team with transfers complete 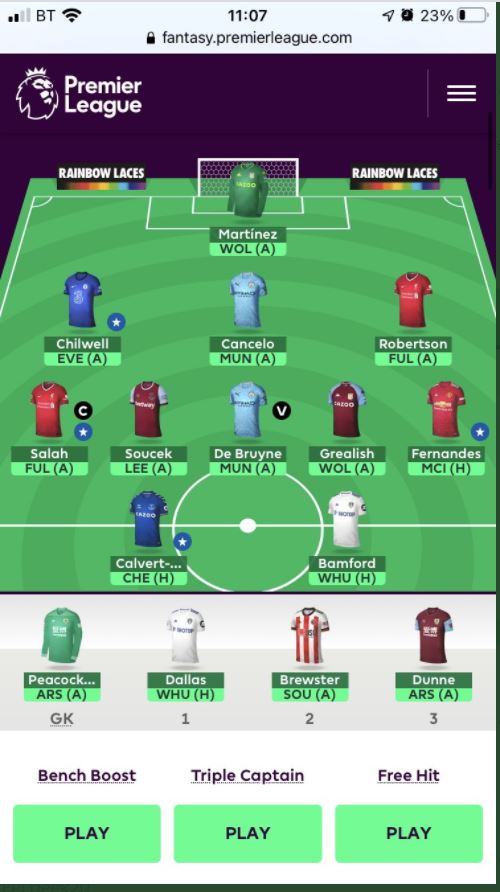 Kev has not used any of his chips

Flat gameweek. A small green arrow comes out of it (Geek note:  that’s 9 consecutive green arrows). My transfers did not pay off. Jota and Jesus both flopped. Also, DCL scored so with the -4, I am 8 points worse off. Grealish did not fall in price so I am out 0.2M of value annoyingly but I figured the towers might freeze him (480K people transferred him out and he didn’t drop 0.1….). It is what it is. But it was fun and Jota/Jesus could have each had monster games this week in an alternate universe.

My thoughts now are dependent on Aston Villa double game week news. I think Grealish will rise this week so I may lose even more team value in the end but I think Wolves Away is a tricky fixture for him so I will lilely wait a week to get him back.

I will keep the team as is though, because my path to Grealish would be downgrading Jesus to upgrade Soucek. The thing is though, Jesus has West Brom in a week followed by New, Sou and Eve before I have a planned wildcard. It could be a fantastic differential.

The games are so hectic now with midweek games, I don’t see the Villa game being doubled until after the holidays.

My other thought is to downgrade Jesus to Watkins and upgrade Walker Peters to Trent. Probably not though.

Most likely scenario is to roll this week.

Transfer summary:  Likely to carry over the free transfer 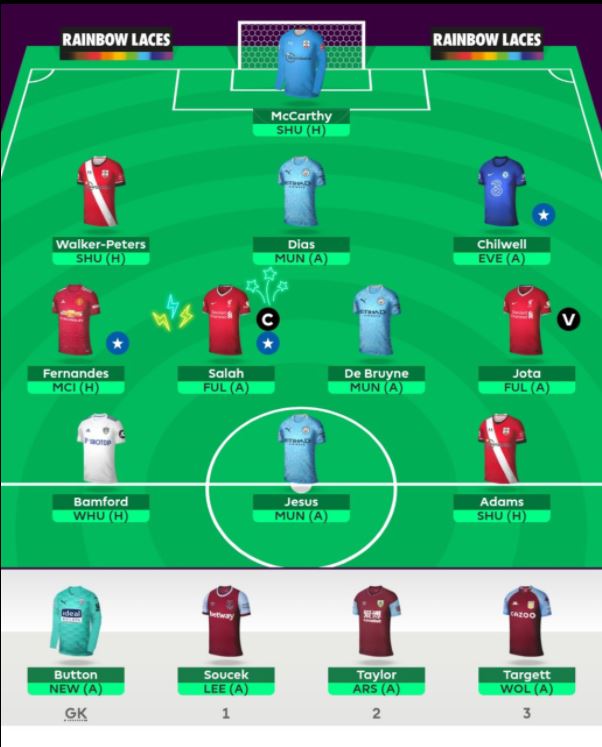 transfer summary:  Subject to Newcastle playing will carry overt the free transfer.  If not Watkins in for Wilson 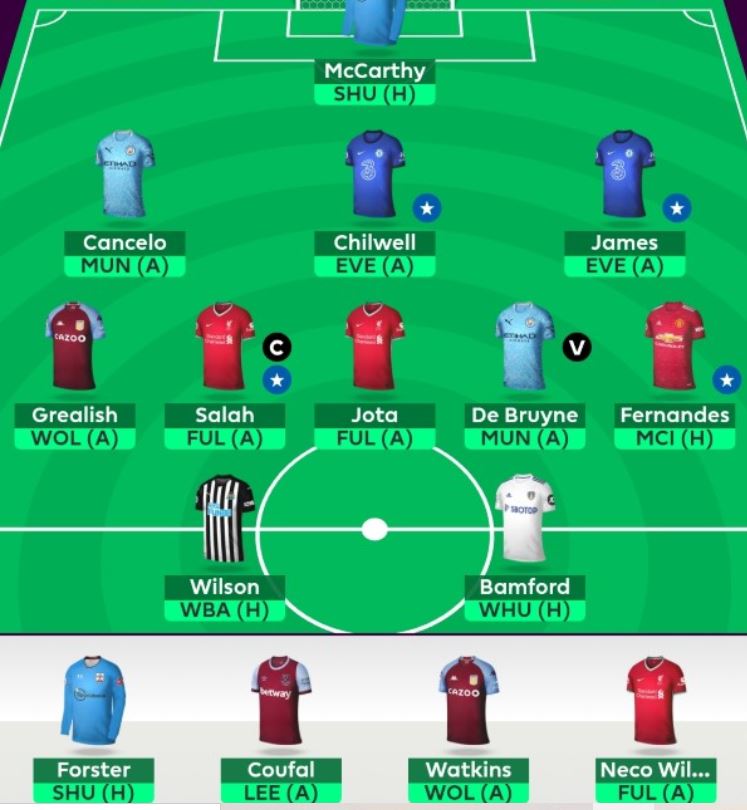 The highlighted FFGeek contributors combined team finished with an overall rank of 52k last season is going ok in 3rd place with total points of 696 and an overall rank of 136k. You can follow that team, including live transfers, on our subscription Patreon site. 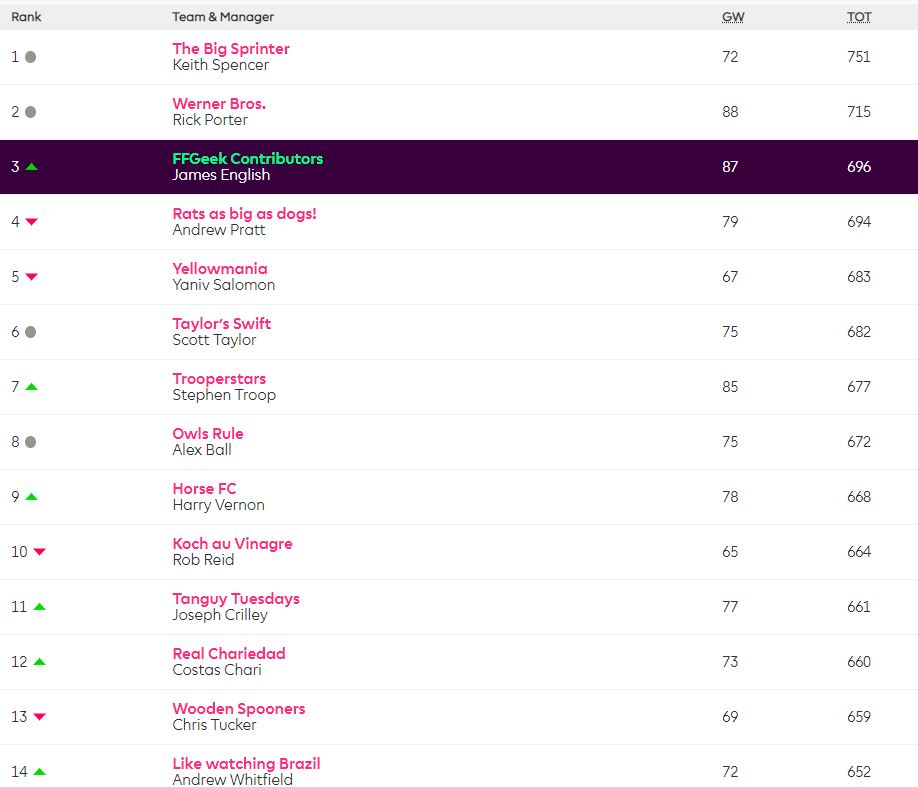 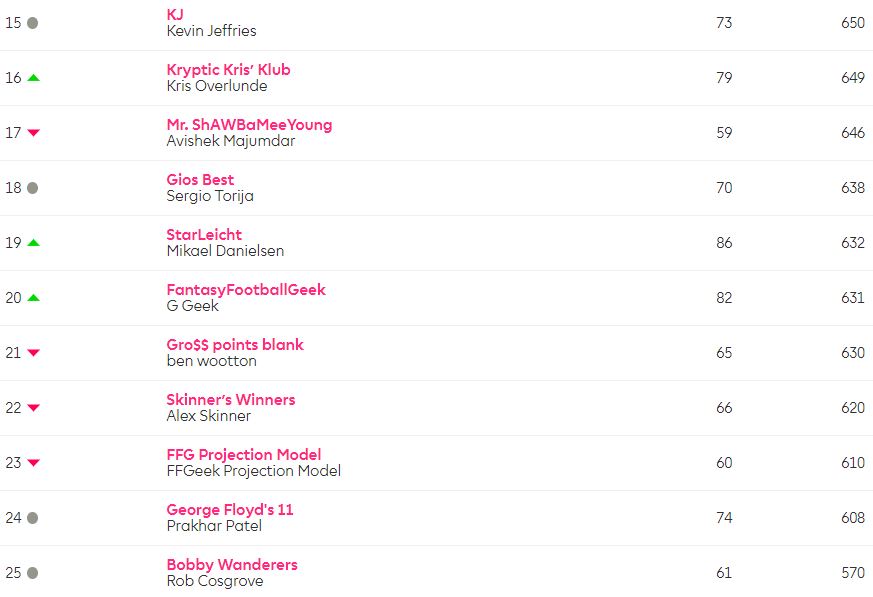