A decent gameweek, no massive returns but plenty of steady ones with 7/11 returns and a kind of bonus +4 from Captain KDB (oh what could have been though!) Stars of the show were at the back – Martinez and Coufal and there were returns for all 3 strikers for the second week in a row. A quick turnaround now to GW14 and a challenging few weeks ahead as we plan for Blank GW18 and Double GW19

I’m starting to plan for GW18/19 now and I’m set on a strategy of playing my Free Hit in GW18 and my Bench Boost in GW19. Priority therefore is now loading up on players who have a double fixture in GW19. This week I’m starting the process by moving the injured Jota to Soucek. I may opt to carry the second transfer but I’m also tempted to use it to further shore up my bench by changing Neco Williams for Taylor of Burnley. I’m then angling to carry my GW15 transfer if possible and in GW16 finding a way to being back either Son or Kane. I’ve just about got the funds for Son if I sold Grealish, Kane would be trickier and would need a game of premium Tetris…we’ll see.

For my team this week, I’ll start Soueck over Adams I think. I’m not sure on my Captain yet but I’m leaning towards Bruno. All the best this week folks – sorry it’s a short write-up, I hope to get something more detailed out next week about my double strategy but in the meantime, I’d suggest you check out Andrew Whitfield’s excellent overview of GW18/19 strategies.

And finally, a very Merry Christmas to you all!

Transfer summary:  Soucek in Jota out

Here’s the team with the above transfer completed

Currently carrying over my transfer this week. I do want Taylor in for Kilman from gw15 and potentially this week given Kilman looks as though he’s lost his place, albeit there has been some rotation at the back for Wolves so maybe he plays on Monday. I have the exact money so hand will be forced if either move in price. I’m currently on captain Salah, though could be tempted by Fernandes.

Kev has yet to use any chips

Another early article. I’ve written with the Thursday’s games not over yet so I am assuming I get a red arrow. Oh well.

I have to confess that I have barely looked at this game week relatively speaking. The ‘Kev in Canada’ family welcomed their third child into the world on Wednesday so I missed every game since the Man City and Chelsea matches. So perhaps I would look to another contributer for any type of advice this week HAHA.

My plan was to play aggressively with that Jesus spot before I wild card in two weeks. So perhaps I go to Watkins for the West Brom match and then move to Ings next week. Or maybe I use the Watkins 3.2M to upgrade a D to Trent for West Brom the week after instead of Ings. Maybe Firminho gets a hot streak going vs Palace and then West Brom the week after and I punt on everybody’s favourite smiling Brazilian.

I haven’t gotten into the DGW info yet with the baby coming FYI. I do have my WC though, so if you have yours then watch this space, as I will be sharing my strategy soon.

The only comment I will make on the DGW is that I would be shocked if they didn’t further add AVL vs either Newcastle or Man City to the double in 19. If/when that happens then they will be the most sought after assets because they will play in the blank 18 AND the double 19. My prediction is that they are trying to see if it can be City/Villa first (because City are just a tougher team to fit in with all their extra Champions League games etc.) and if they can’t then they will do Newcastle/Villa. It would be silly not to try to make up at least one of the Villa games when they have two that need to be dealt with. I would even think Villa have been told they will be playing that week for sure, we just don’t know who yet.

To sum up just this week, I would say that I am 70% going Jesus to Watkins and I may even captain Grealish against them if Barkley is back (Barkley seems to be having an impact on Jack’s performance). Salah/Bruno/KDB all have great fixtures too but Jack’s nailed (nailed as there is really) and he could go off vs. a team like West Brom. I am also not confident in the playing time of the other 3 (MUN haven’t played SHU as I write this and if he played 90 somehow, I would be worried).

Good luck and keep safe. Positive thoughts. Love your family and all that. I am a Dad again! It’s special every time. Much love.

Transfer summary:  likely to be Jesus out and Watkins in 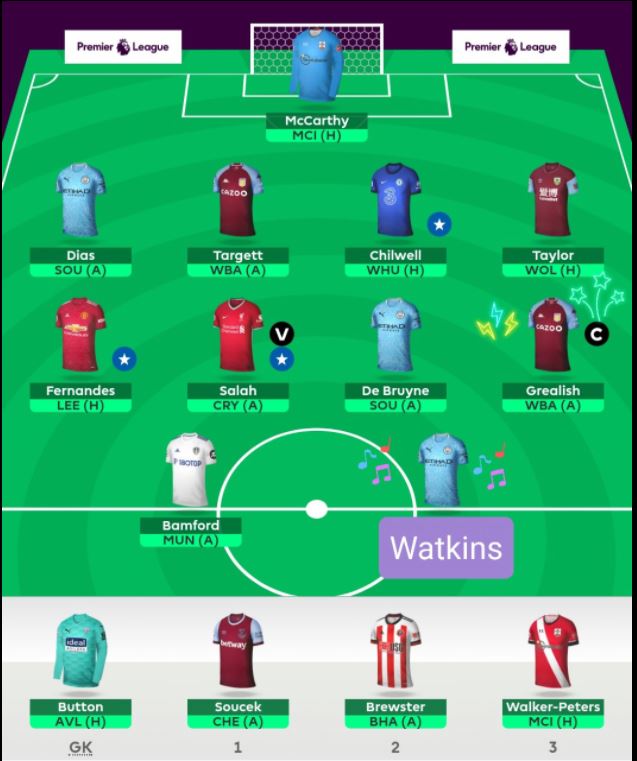 (Note: written before the Thursday games)
My punt of Gross this week did not pay off as he only played 4 minutes! With Brighton drawing 0-0 this keeps up with the fact that since GW7 since Gross came into the team, when Brighton score he is involved!

De Bruyne captain blank was unexpected VS West Brom but this wasn’t actually the end of the world because so many managers had him blank too.

Looking forward, and every transfer now is with the double game week in mind. I have made a provisional plan to how I will end up with 15 players playing twice! It looks like this..

This steady builder brings the double game week players in at a point when they have a decent fixture so seems like a double win in my opinion. There will be 2 x 4 point hits and 1 x 8 point hit which should all balance out come the double game week, with my free hit being activated for the blank in GW 18.

So this week my transfer will be Kilman out for Charlie Taylor which will not be made until after the Burnley game incase of injury/suspension.

Looking at the captain options and I don’t like any of the premiums! Salah early kick off (goes against my religion), KDB away at in form Southampton, Bruno at home to Leeds where Man Utd have struggled at home recently. I am currently thinking of a crazy differential Grealish captain this week away at West Brom; Villa are very good on the road this season and West Brom are looking poor defensively.

Transfer summary:  Likely Kilman out for Charlie Taylor in

Here’s my team before transfer made (assume Kilman is Taylor)

The highlighted FFGeek contributors combined team finished with an overall rank of 52k last season is going ok in 4th place with total points of 806 and an overall rank of 123k. You can follow that team, including live transfers, on our subscription Patreon site. 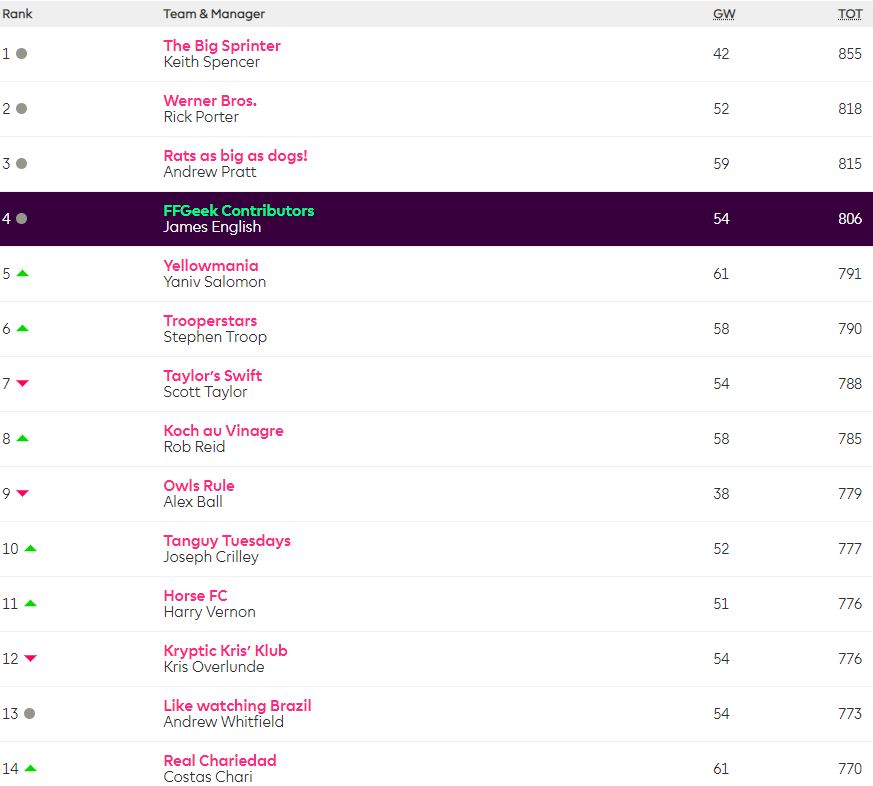 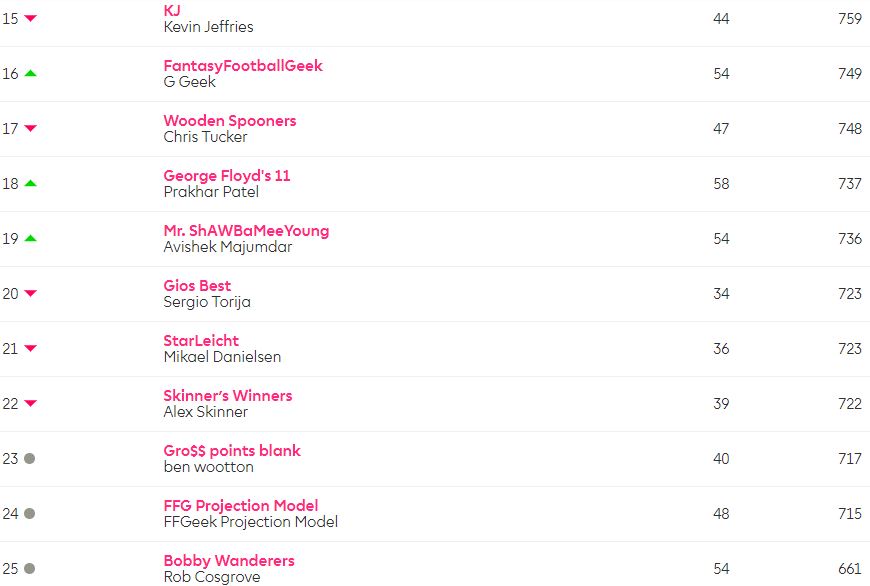