A nice green arrow again sees a rise to 37k. Playing my own game again for the first time in 2 seasons has me enjoying the game again and actually having some success.

Benching Soucek really stung but I can’t really complain- the -8 (Gundogan, Cancelo and Antonio) paid back and some and in total there were 6 returners (Salah still to play) which was  nice.

Bamford has failed the eye test and his stats are woeful as are Leeds attack so he will go to Kane this week. Capo will be Gundo or Kane. Good luck all.

Transfer summary:  Bamford out Kane in

After a very disappointing DGW19 which saw me drop from 40k to 95k, I’ve so far managed to bounce back slightly this GW. I’m sitting on 82k before Thursdays final game where I have 3 players. My transfers were De Bruyne >Gundogan which worked out very nicely, and Adams to Kane for a -4. Cancelo also paid me back for his DGW score with a goal, assist, clean sheet and bonus. Grealish/Watkins the other returners with a goal each but only 1 bonus. Soucek on the bench with 15 points is painful.

I’m unsure what i’ll be doing this week. 1FT and Rolling a transfer is likely but I’ve also considered

Everton have extra games and play Newcastle this week (in addition to Leeds and Fulham in the next 4). Their assets feel a bit differential currently as well which tempts me.

Antonio is also looking strong and could have scored 4 this week. Liverpool up next though might mean I wait.

Either way I’ll have a strong bench each week, which as we’ve seen this week, can be detrimental, and lead to tough decisions constantly, but with a bench boost and future doubles to come I’ll need this strength (although I do have a WC).

As I’m so unsure, I’ll likely roll the transfer as I’ve said. The third defender spot is a bit weak this week if KWP is injured, and as a glutton for punishment Soucek is on the bench again. Captaincy is tough. It’s currently on Bruno but all my premium attackers are facing defences in form. If Salah shows some form tonight, it may change to him. 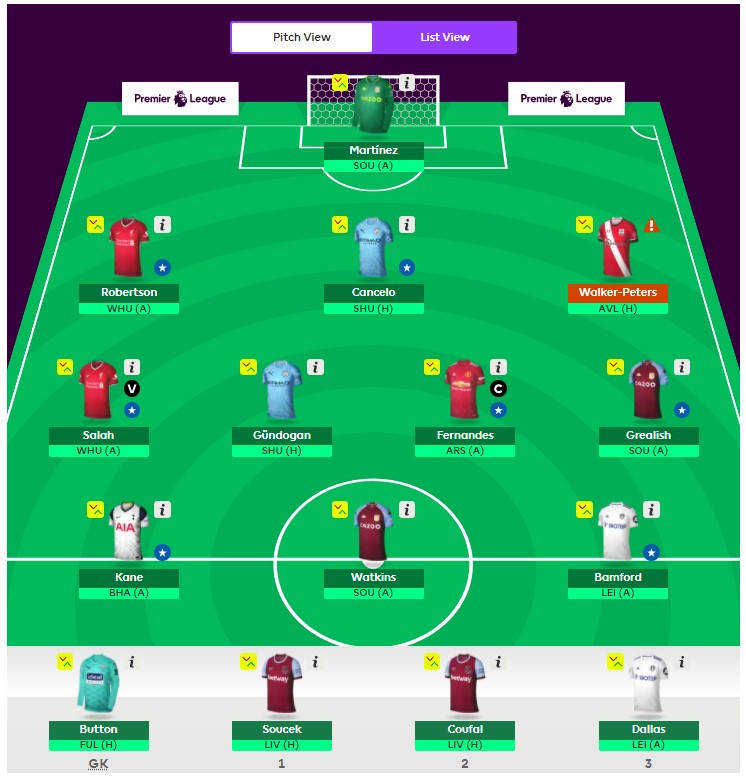 Listen to Kev on this weeks FFGeek Podcast

Early write up with an early transfer. I had exact money to do Anguissa to Gundogan but it had to be done on Tuesday or I would be priced out.

I would have been fine saving the money and playing Soucek but Gundogan looks a new player. Dare I say he is taking the David Silva  role we all thought Foden would claim? It sure seems that way. Either way, he gives me one more player that should see multiple rises before I wildcard in 25 and I could see City getting an extra DGW. So having a budget friendly third City that is in the form of his life with two excellent fixtures made sense. FYI, My next luxury moves will likely be downgrading Dallas and upgrading Coufal to Reece James or Shaw (Geek note.  Neither started in GW20 after this article was written which may change Kev’s view). Depending on DGW news.

So I gambled and moved early. The bright side is if I get an injury now I have one more attractive bench player to cover rather than a player like Anguissa. However, like last week if the player that gets injured is a premium, then I take a hit. 10+M on the bench injured is worth a hit in my opinion. The money is too high to waste.

Next week my feeling is that Kane will lead the armband race. He and son have the best premium fixture. Bruno is away but Arsenal’s defensive form is better recently (although Partey may have a knock again), and West Ham are all of a sudden a really good team making Mo not obvious. So I want a Spur captain.

*The vice is on Mo in case of a Spurs Covid postponement.

Transfer summary:  Anguissa out to Gundogan in

Here’s the team with the above transfer made 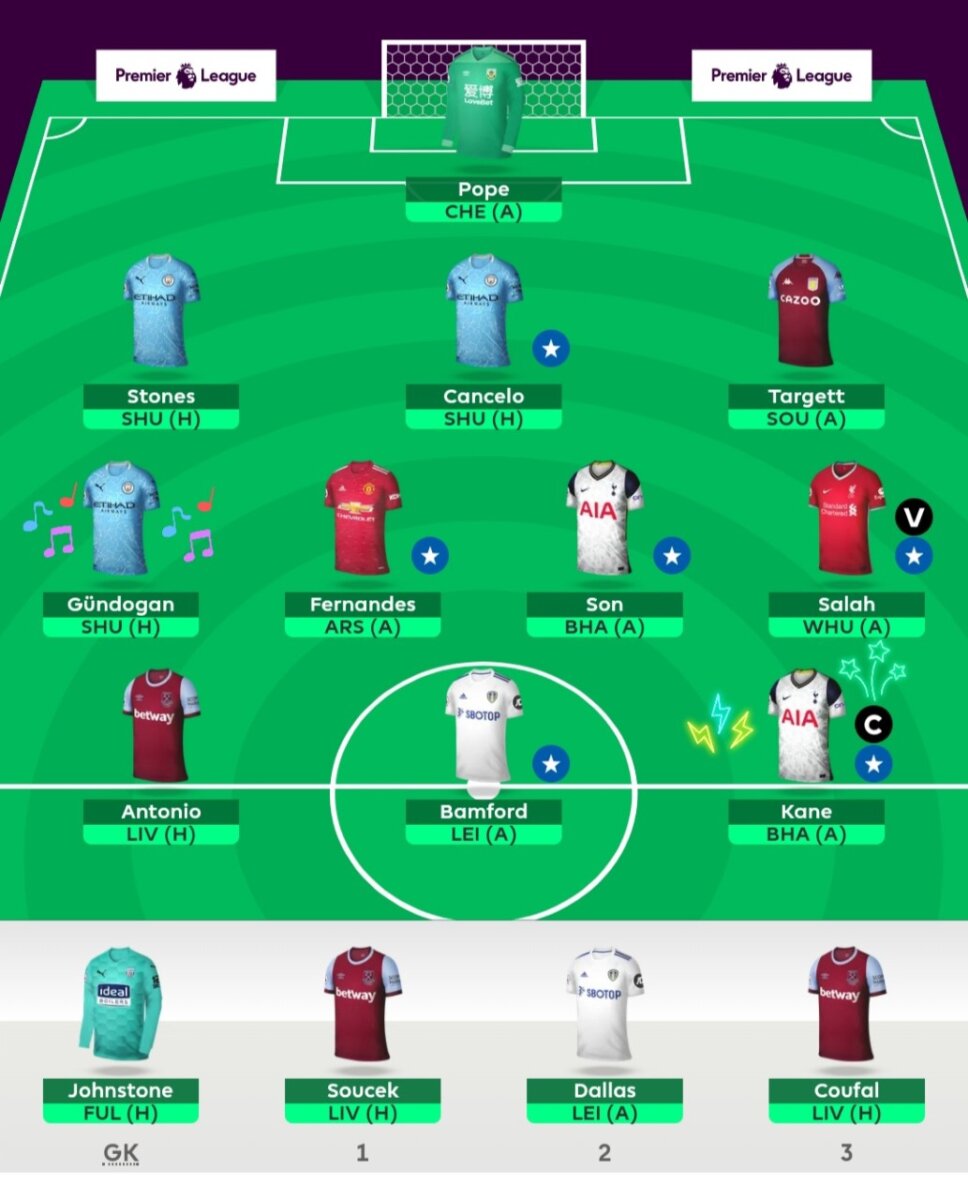 It is being all or nothing lately with my team, after last week’s double gameweek failure, this week I am almost on the same gameweek points with Kane still to play, provisional gameweek rank of 27,500. Other than Bruno’s blank as captain, and lack of clean sheets, the rest went really well, with four double digit hauls (Cancelo, Mahrez, Sterling, Soucek), plus goals from Maguire and Watkins. Hopefully Kane with add to this.

The outlook for my team in the next couple of weeks is pretty stable with great fixtures, so not planning in any drastic changes until GW23. For GW21, prior to transfers I would be starting Soucek vs Liverpool, with Coufal first on the bench. So the question was whether to save a transfer or finally get rid of Neco Williams who doesn’t play. With little left in the bank the only viable player I could afford was Mitchell, which I don’t really love as a pick given that Palace were awful in the last game and the threat of PVA getting back the starting spot is still there. It’s been a long time with a pretty hopeless bench though, so decided to do the move. Neco Williams out Mitchell in, and I will be having Soucek in the bench, which we’ve seen this week could end up badly… Hopefully I get it right, and as you would expect, he won’t be bracing against Liverpol.

As for captaincy, I can’t see Sheffield United repeating their heroics vs United once more against City, so in principle I will go with Sterling. Will have to look at the poles later on the week though, if Kane vs Brighton was looking as a favourite, I might go with that instead. 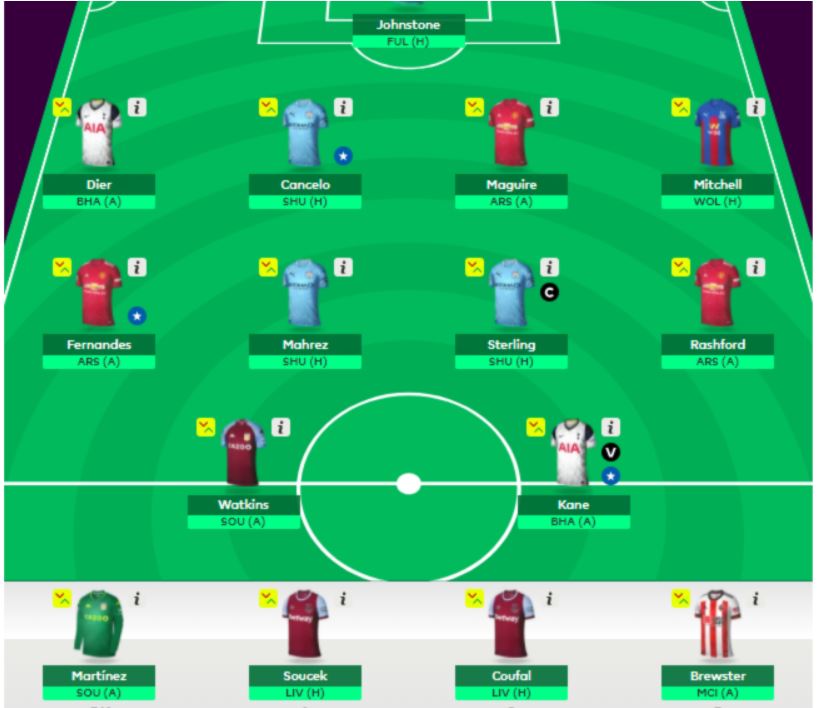