Andrew has used none of his chips

GW24 has been reasonable so far. Mee won’t play the second game but I’m hoping Pope, Cancelo, Dias and captain Gundogan can still come in for me. I’d be content to close this gameweek with any green arrow. I’m happy I benched Calvert-Lewin and stayed away from Everton as they look terrible. Bringing in Cavani for Antonio felt great at the time but Manchester United barely troubled a West Brom team which had conceded 54 goals in 23 games.

GW25 features doubles for Southampton and Leeds, whose attacking players are far more attractive than their defence. Spurs and Manchester United also have good fixtures. At the time of writing the anticipated double fixtures in gameweek 26 have not been announced.

My planning for the next few weeks will depend on when the DGW26 fixtures are announced and what they are. To not be priced out I have already taken a hit to move out:

– Calvert-Lewin (Everton looking poor) to Ings (slightly overpriced but he’s on penalties, has a double, and Southampton might get additional doubles in the coming weeks).

These moves allow me options:

1. If the DGW26 fixtures are not announced before the DGW25 deadline or they are announced before DGW25 deadline and fall favorably for my current team, and there is no adverse rotation / injury news, I will leave my team as is for DGW25. I’d then need to make a call on whether to bench boost in DGW25 or later (possibly DGW26). This call is easy to make if the DGW26 fixtures are known but hard if they’re not. I’d like to get 20 points from the bench boost and my current bench of Martinez, Cavani, Dias and Mee has a fair chance at that. Leaving my team as is means a potential bench boost in DGW26 might be weakened by a bench of mainly Leeds players in a single gameweek against Villa, so I’d need to get rid of at least one going into DGW26. This forced transfer and potential injury concerns leading into DGW26 troubles me about planning for a DGW26 bench boost with my team as is – I feel that I could end up with a bench weaker than my current DGW25 one. On the upside I’d save the wildcard until later, which might prove a powerful strategy.

2. If the DGW26 fixtures are announced before the DGW25 deadline and my team looks relatively weak for the mega DGW26 as a result of the announced doubles (or significant injury news), I can still negate my DGW25 hit and wildcard going into DGW25 to create a team optimized for DGW25 and a bench boost in DGW26. Here the best option might be a DGW25 WC team with only 2 Leeds players since any I can’t transfer out before DGW26 would effectively weaken a DGW26 bench boost. As much as I hate tearing up my otherwise immaculate DGW25 team, this option of wildcarding into DGW25 knowing the DGW26 fixtures feels right.

If the DGW26 fixtures are not announced before the DGW25 deadline, I’m unlikely to wildcard in DGW25 and guess at DGW26’s fixtures – but I’ll be left with a big call to make as to whether to use the bench boost on Martinez, Cavani, Dias and Mee in DGW25. Selfishly, my preferred scenario would be that the DGW26 double fixtures are announced before DGW25 and that there are a few major surprises which benefit those with WC and BB chips in place.

Unless I wildcard I won’t have Kane in my DGW26 team, which is a slight worry given that many veterans are planning to captain or even triple captain him then. Another concern is that Kevin de Bruyne will soon be back and I will want to get him in before too long. It’ll be hard to drop Gundogan so I can see Dias or Cancelo departing at some point to make way for de Bruyne.

Here is my current DGW25 team “as is” after the hit for Ings and Raphinha. It is ready to bench boost if necessary. Captain in this scenario would be Bamford or Ings.

Transfer summary:  Soucek to Raphina and Calvert Lewin to Ings

As I write this at the end of Monday it’s been a bad day for my bench boost despite the 108 points with both Antonio and Chilwell not playing. Hopefully Dias plays on Wednesday so at least I’ve had two players from my bench boost!

My plan over this week is to bring Kane in for Antonio and Chilwell out for a Leeds defender, most likely Dallas.

I’ll then follow this in gw26 with Son for Soucek and a downgrade on Areola to a 3.9/4.0 keeper – I plan to triple captain Kane in 26 too. This is all predicated on the expected gw26 doubles and spurs vs. villa going into gw29; though this might not significantly alter my gw25 transfers as I would still have 6 players ready for 29 which seems a good start when they’d only be three games. I have 0.1 to play with on prices so might move Chilwell early as Leeds don’t play in Europe this week; and I plan to bench my Leeds defender in 26 and play them in 29 when they have a confirmed fixture.

Captain is Bamford and vice Fernandes. I wouldn’t be surprised to see Stones, Gundogan or Dias getting a rest so I need to think about my bench order between Soucek and Reid.

Transfer summary:  Likely transfer Kane and Dallas in Antonio and Chilwell out 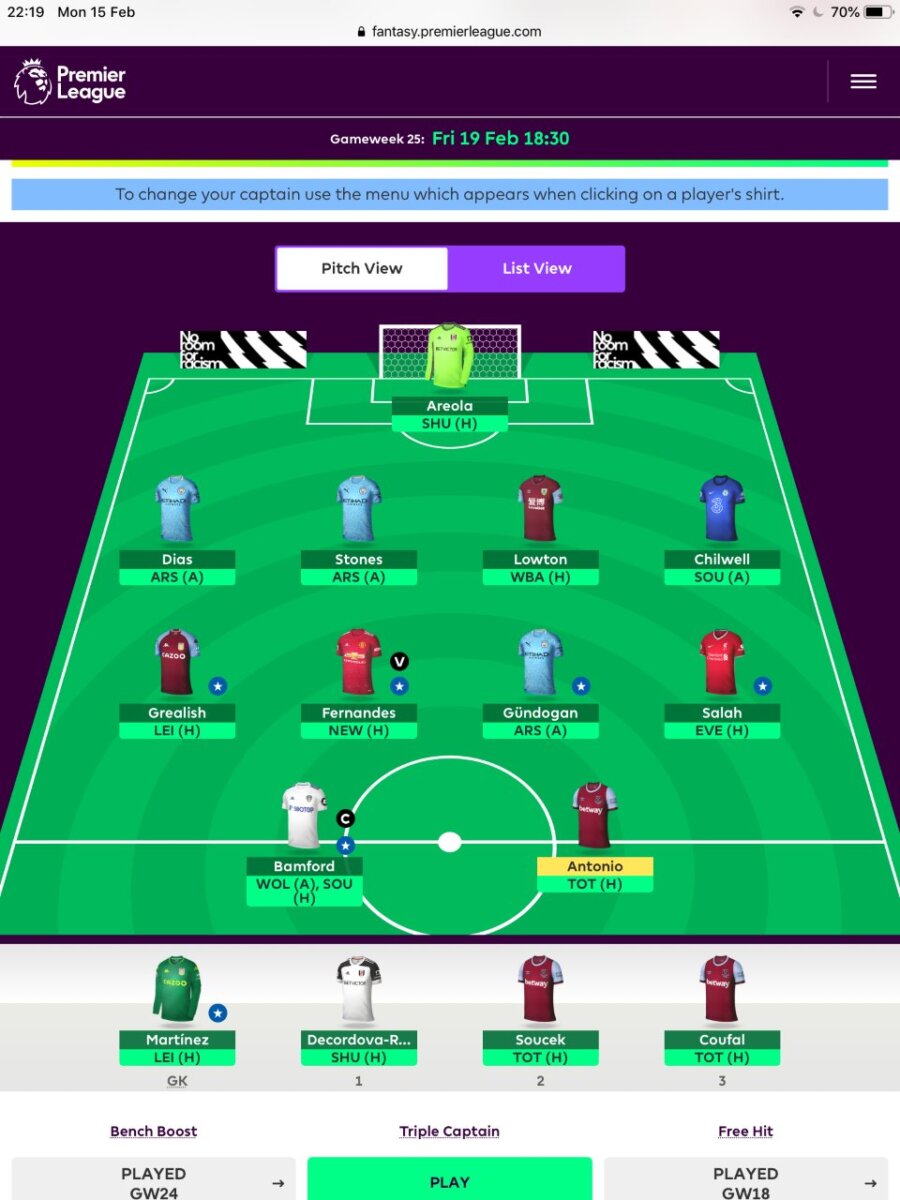 The highlighted FFGeek contributors combined team finished with an overall rank of 52k last season is going ok in 2nd place with total points of 1,580 and an overall rank of 15k. You can follow that team, including live transfers, on our subscription Patreon site. 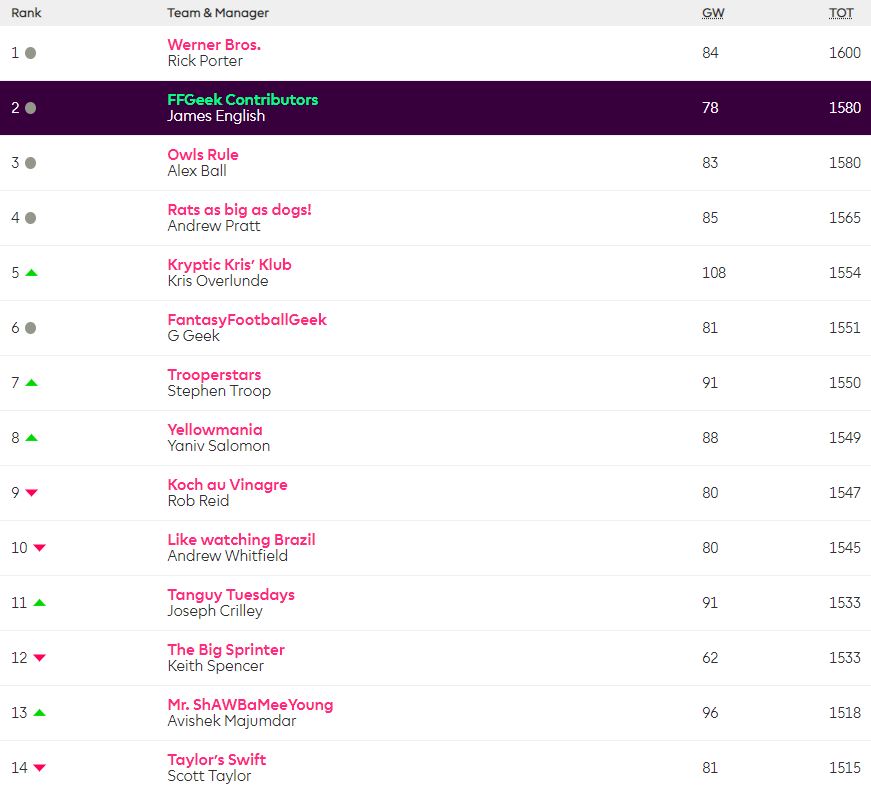 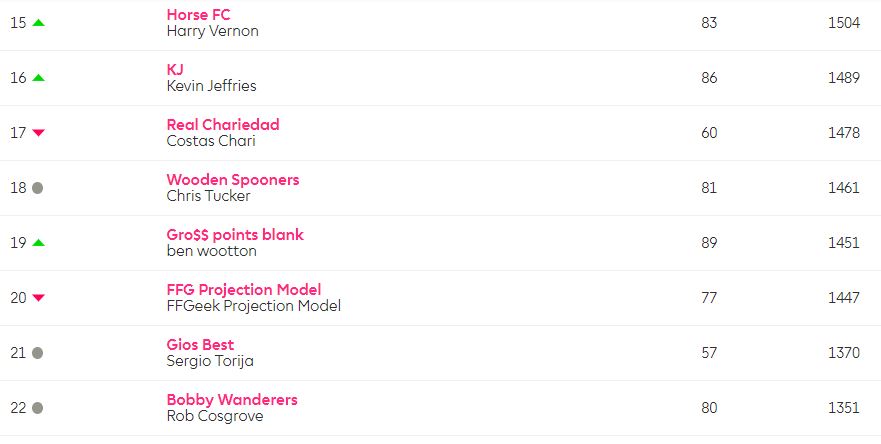