Gameweek 29’s Free Hit went well. At the last moment I gave the captaincy to Lingard which paid off but moving Lacazette out for Maja cost me 10 points. The Brighton triple defence scored a welcome 22 points. I had higher hopes for Lookman and Cresswell but I won’t complain when many had a bad week.

Having played my wildcard in GW28, I now only have the triple captain chip left. Hovering above 10k OR at this point in the season is a good place to be. After last season’s poor showing I’d probably take any top 10k finish at this time. Going into the final straight, my challenge is to not go too rogue or differential in the pursuit of an exceptional rank. So for now I’m planning to make conservative choices and hopefully cover the template of the GW31 wildcarders. I’ll be watching the fixture re-scheduling carefully – if the postponed GW32 fixtures of City, Villa, Southampton and Chelsea aren’t reinstated into GW32 I could be in deep trouble. Similarly, I’ll look to negotiating BGW33 where my 6 City, Spurs and Southampton players currently won’t feature. If you’re chasing a good rank or need to climb up your mini-league over the last 9 gameweeks, a transfer planner is now a must!

Gameweek 30 has some juicy fixtures including Chelsea v West Brom, Leeds v Sheffield United and Newcastle v Spurs. I’d planned to bank this week’s free transfer and barring major injury / rotation news I’ll make no changes. I’m trusting Son will return for this gameweek. It would be sensible to hold your transfers until after the international break since injuries may still surface.

One major downside of playing my wildcard in GW28 is that I then felt the need to ship out my Leeds triplets as they have much tougher upcoming fixtures – but this week they could torment me as I think they could pummel Sheffield United. On the flipside, good performances from Chelsea and Richarlison would work in my favour.

I’ll likely go with Kane as captain with vice on de Bruyne.

So a really bad blank gameweek as I made some terrible choices bringing in Aubameyang, Grealish and Maja for 3 points for a cost of four points. This also means I’ve wrecked my team from 31 onwards so will definitely wildcard in 31 (this might be my silver lining!)

In terms of gw30 my team looks ok (assuming Son and Grealish are fit). I fear Salah and Gundogan will make me pay for selling them in gw29. My plan is to replace Aubameyang with a punt on a Chelsea attacker vs West Brom, most likely Havertz. Captain is Kane against a terrible Newcastle team. Clearly I need to keep an eye on fitness and any coivd outbreaks from the international break

transfer summary:  Possibly Aubameyang out and Havertz in

Scott has used his Free Hit Chip and his Bench Boost

My plan is to wildcard in GW31 and so I have a 1 week transfer this week. The problem is I don’t really know how to use it as I’m pretty happy with my team as it is. My only thought so far is to bring a Chelsea defender in for their home game against West Brom. Dunk or Stones would be the transfer out. The problem then is who to drop from the starting 11. Probably Cresswell. I’ll have to think about it a bit more. Wish I hadn’t wasted my bench boost chip in GW26 now (it scored me 10 points!). This week looks like a plum week to play it for my team. Oh well.

Captain will likely be Kane. Vice on Raphinha.

Any decisions are obviously dependent on any curve balls the international break throws up. 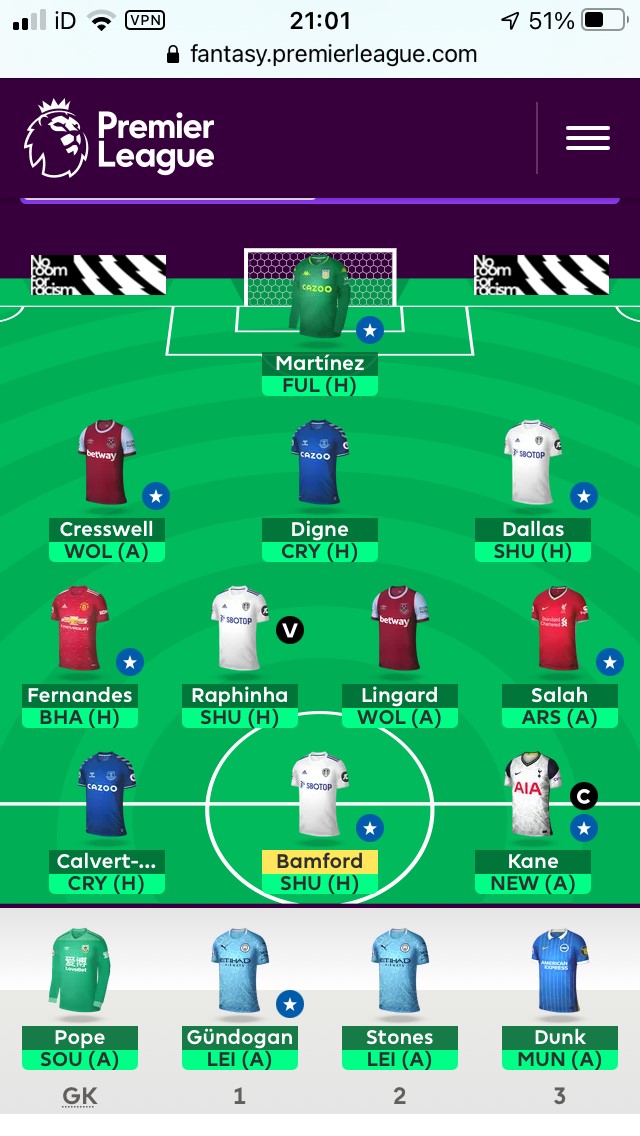 Kev has used all his chips

An early one for the FPL addicts, like myself..

The Free Hit in GW29 was technically a success, as I had a green arrow but its biggest benefit is right now. As I did not need to use transfers on Brighton and Fulham players in. Also, I don’t need to use transfers to deal with getting them out now. I hope it pays off and that Jota, Rudiger, Shaw, etc. being in my team already translates to an advantage in points and OR.

I may even roll my transfer this week. It seems odd to say that with 2.5M in the bank. I also realize that a lot of issues may arise on the international break. However I have the three premiums I want already in Salah, Bruno Fernandes and Kane. I have great match ups this week all around too with decent bench cover.

I think it could potentially be more beneficial to roll the transfer so I can maybe get some double game week news. At the minimum it will allow me to have 2 free transfers going into GW31, a week where many will be wildcarding and changing the template.

If I were to use a transfer, it would likely be Barkley to Raphinha, seeing as he plays SHU. However after SHU he plays MCI, LFC and MUN, which is dreadful. Or I could move Taylor to Azpilicueta. Although Taylor play Wolves in BGW33 and Chelsea play West Ham, so maybe not. I could triple up on Liverpool for their great run and change Konsa to Robertson. Although Konsa should double soon and I really prefer Trent to Robertson so… a lot to ponder but it all leads to rolling really.

Captain is currently on Kane vs Newcastle. Hopefully Newcastle are still leaky and also hopefully Son is back by then.

Good luck. If I change my mind I may send in an update to Geek, closer to the deadline. 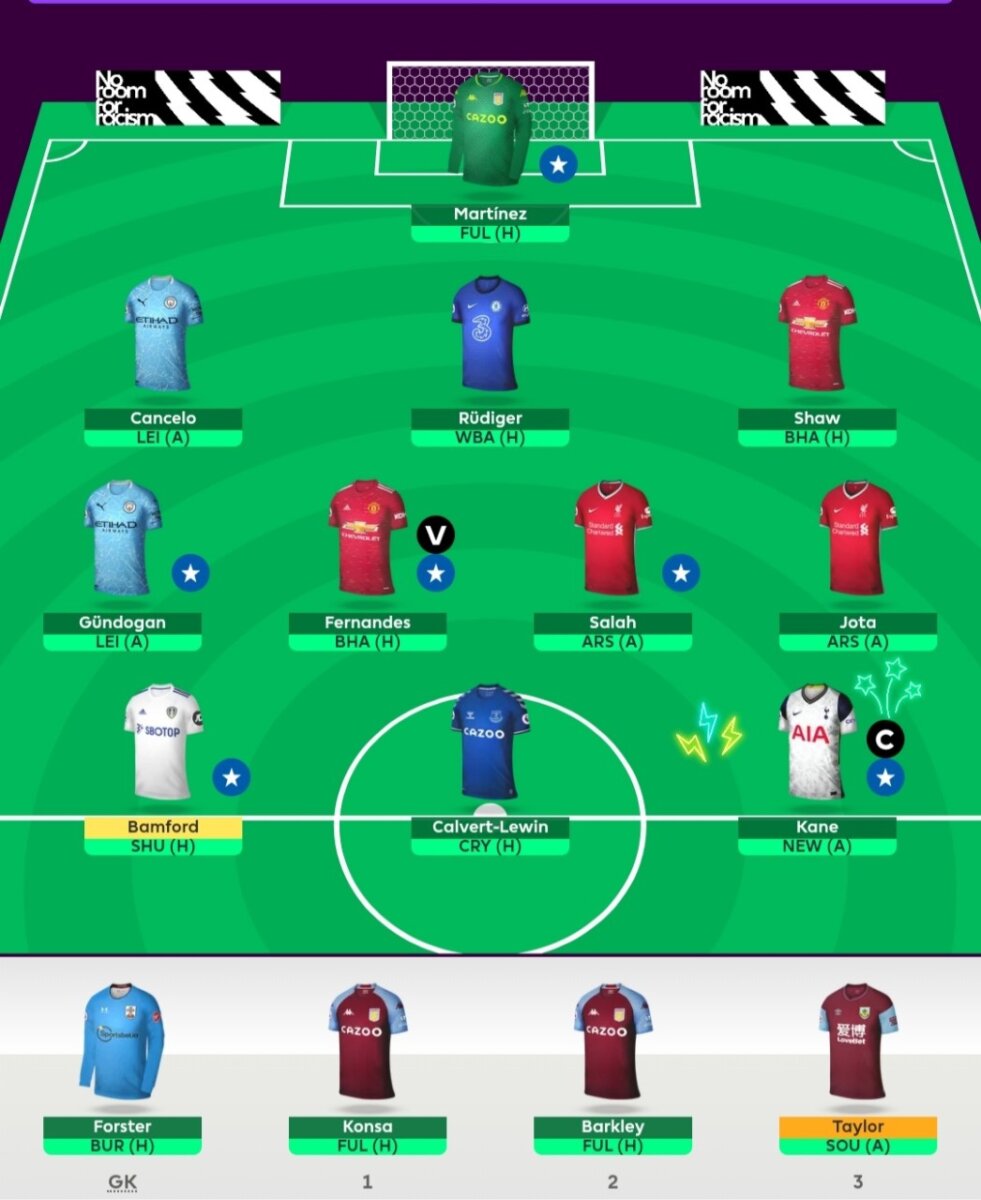 Sergio has used his Triple Captain Chip, Wildcard and his Bench Boost Chip

Listen to Sergio on the FFGeek FPL Podcast this week

Finally out of the period with blanks and doubles, we will get at least a couple ‘normal’ game weeks after the international break. I managed to come out of blank GW29 with a green arrow, which was very pleasing, particularly given that I went into it with just a 7 player squad. Key for this was having made 2 good transfers in Lingard and Lookman, combining for 17 points. Also got a captain return with Raphinha, and Kane’s goal.

The outlook for GW30 is completely different to the depleted squad I had for GW29, I could reasonably start most of my players. For now, I’ve got Alexander-Arnold and Foden in the bench, but I could play one of them for maybe Cancelo, Watkins or Lingard. Then there is Son who is flagged, I am planning under the assumption that he will be fine for GW30, otherwise that needs looking at. Likely will save the transfer this week unless we hear Son is injured in which case probably Fernandes is the natural target. On a long international break it is worth waiting on early transfers since there are many games to be played and many potential injuries to our players to happen.

Lot’s of reasonable options for captain too, Kane vs Newcastle has to be the obvious one, but I don’t dislike Raphinha home to Sheffield United or even DCL home to Crystal Palace. For now I’ve got it on Kane. 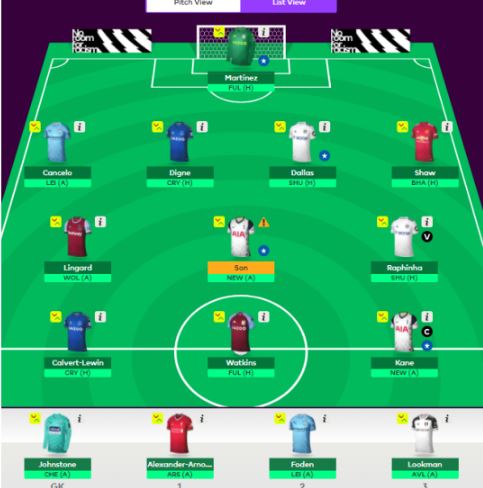 The highlighted FFGeek contributors combined team finished with an overall rank of 52k last season is going ok in 6th place with total points of 1,915 and an overall rank of 20k. You can follow that team, including live transfers, on our subscription Patreon site. 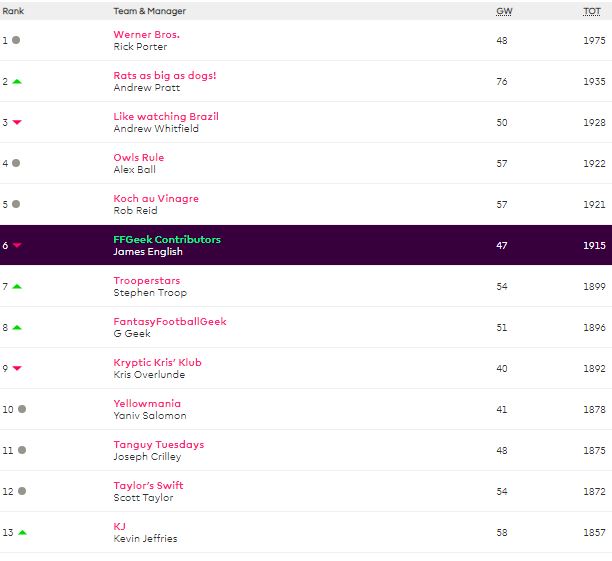 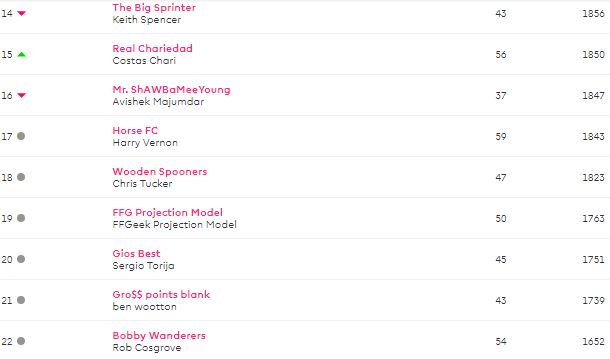 Early thoughts on the FFGeek Team