Kev has only used his triple captain chip

Here’s his points so far:

I am writing an early article to get my thoights out there. I will wrote another one on Friday morning.

I clicked the wild card button right away this week to take advantage of price changes. It hasn’t made me a boatload of money by any means but I knew I was wildcarding even if we didn’t get the double announced, so I figured that any gains help.

This article may not be helpful yet, as the doubles fixtures are not yet known past game week 25. However, we have a good idea of what most of them will be.

As opposed to writing 5000 words, why don’t I just discuss some of the main thoughts going on in my head. Then I will show you my team as it is now but keep in mind it is definitely subject to change.

•Tottenham and Villa have DGW26 and play in 29.
-Kane, Son, Martinez locked for me.
-Watkins vs Grealish is tough. I prefer Grealish but just can’t have a decent overall squad with him. Watkins’ price is much friendlier and he is very close to as dangerous as Grealish. Although I may start without Watkins and change Bamford to him next week.
-I will be going Konsa over Targett for the savings. Both are nailed. I think Konsa has more attacking potential. Waiting for one more potential Targett rise right now before changing him.
-For half a second in one template I went triple Villa Defence but I want an attacker.

•3 City are a must
-will just keep Stones, Cancelo and Gundogan.
-If Gundogan news worsens I will swap him to Foden.

•Bruno isn’t going anywhere. Mo… could become Mane.
-most will think this is silly but the biggest beneficiary of Trent’s form coming back is going to be Mane. The savings really help in the DGW. Just a thought for now. It comes down to owning Ings or not for me.

•If the fixtures aren’t released before deadline, I will play the DGW26 fixture teams that are the most likely.  These are not guaranteed but potential fixtures hopefully announced before the DGW25 deadline on Friday 18.30 UK time

That would still leave Villa v Sheffield, Spurs v Southampton, WBA v Everton and Man City v Southampton to be rearranged.  There could be some interchanges with the above there just to confuse matters.  Man City have no Euro game in GW27 and likely to have a fixture there

Here is the team for now with no Ings and with Mo over Mane. 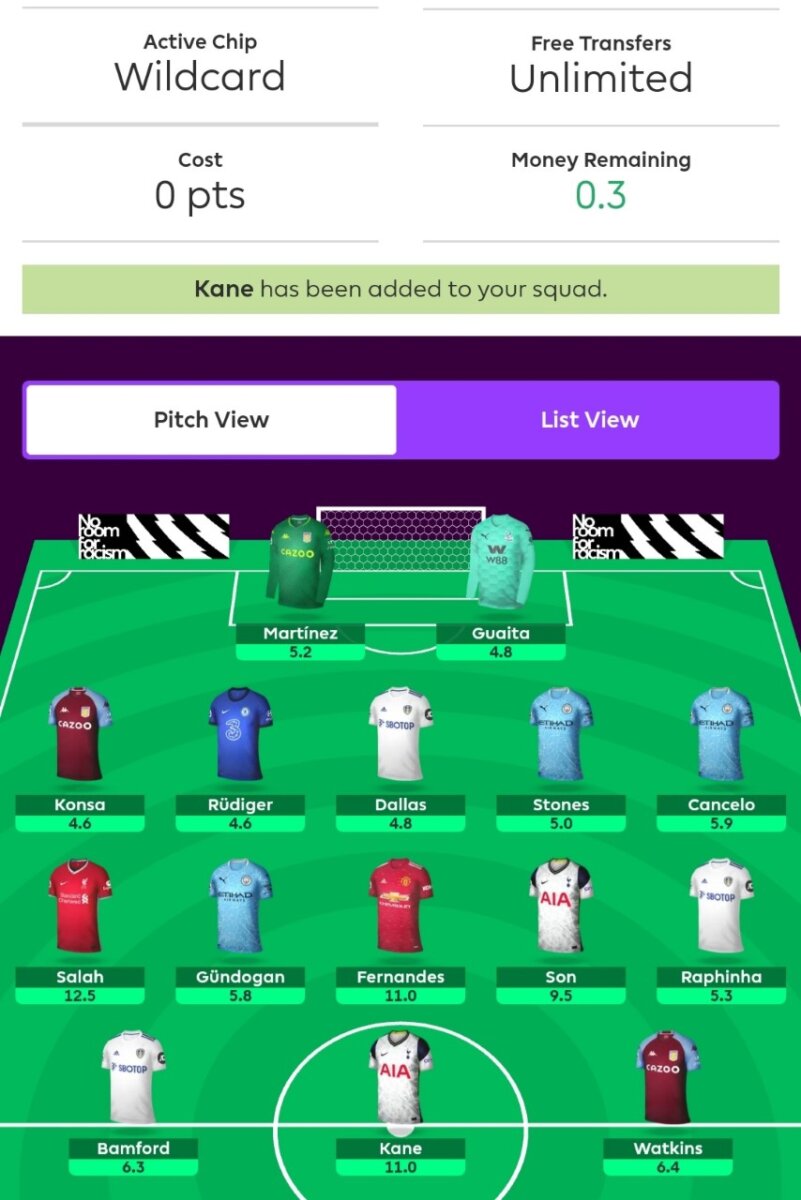 Here’s the transfers I’ve made:

Pope out Martinez in

Johnstone out Guaita in

Coufal out Rudiger in

Targett out Konsa in

Rodriguez out Raphina in

Cavani out Kane in

Antonio out Watkins in

That’s it best of luck if you are activating your wildcard.  Hope it helps