“This is brave, this is bruised

This is who I’m meant to be, this is me”

After a freakish start to the season with more downs than ups, Gameweek 10 brought us to a crossroads and chance to show what kind of FPL manager we were. Would we be loyal and stick with Son and Kane? Play the fixtures with City and Vardy? Stay safe with Bruno or take hits to jump on Jota?

With such a variety of options for the FPL Circus, it seemed that our ranks were only limited by our imagination and some members of The Great and The Good showed that you don’t make a difference by being like everyone else, but who was the Greatest Showman?

The Great and The Good are the Scouts Neale Rigg and Joe Lepper, Pro Pundits (Mark Sutherns, Az, Lateriser, Fabio Borges and Tom Freeman ), FPL “celebrities”, FPL General,  Magnus Carlsen and finally from the Hall of Fame we have Ville Ronka, Matthew Jones and Sean Tobin

Just like the stilt walker at a carnival, all the managers look up at Magnus this week with the highest score of 74, which sees him go into the top 50,000 for the first time this season.

Mark continues to fly high with a green arrow of 460,000, this latest performance of FPL acrobatics means he has gained over 1.1 million places since Gameweek 7 when he gambled on a double Chelsea defence.

The armband sideshow provided mesmerizing this Gameweek with audience opinion divided but in the end the Bruno and De Bruyne captainers received top billing. Lateriser and Ville Ronka were a little fortunate to have Jota and Fernandes make up for Sterling’s disappearance act.

After walking the tightrope on last week’s FPL Wire Neale decided to be aggressive with his squad and went for the juggler by playing his Wildcard. The full moves are below:-

His decision to rewrite the stars saw eleven changes with a whole new front line and all his strikers have the xG factor as Vardy, Bamford and Calvert-Lewin top this stat over the last four weeks.

Kane and Son are his human cannonballs as they are fired from his troupe but his decision to release Chilwell and Bowen are perhaps the most surprising acts.

This is a summary of the transfers for this week:

*transfers out are in brackets

The Great and The Good big top saw an in-tents number of hits and transfers this week as they sought to capitalize on the form of Jota and fixtures of Vardy.

Tom took his first minus four of the season to acquire the high flying double act but he has some way to catch the daredevil himself Mark who is now on his fifth for the season, although he may now regret his choice of City defender with Cancelo a no show on Saturday.

Despite the clamour for City players it’s interesting to note that Az, FPL General and Matthew Jones have yet to jump through hoops for any of Pep’s entertainers although surely that will change with Fulham up next.

The template for The Great and The Good is as follows with the number in brackets showing how many teams in which they appear:-

The human pyramid that is The Great and The Good template continues to wobble precariously with Jota being the latest to join the balancing act as Soucek loses his appeal.

The table below shows some of the key stats so far:- 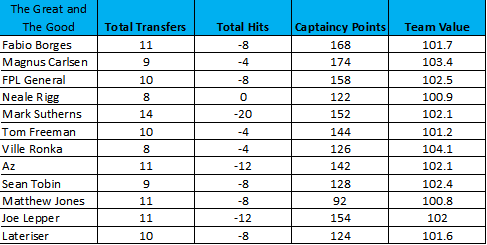 Mark has taken a freakish number of transfers compared to other performers but he along with Tom, Matthew, FPL General and Fabio appear to be planning for a late Wildcard finale as none of them have yet to let go of the trapeze.

The importance of value, like a discussion between fire-breathers, always causes a heated debate but Ville Ronka clearly sees it as a priority as he has a team value of over 104 million, some 3.3 million more than Matthew Jones.

One stat to note when it comes to next week’s show is that there is plenty of money in the bank for The Great and The Good carnival with an average of 1.5 million waiting to be spent, with Lateriser sitting on 3.3 million and Fabio on 2.8 million.

Meanwhile, when it comes to captaincy there is only one ringmaster with Magnus scoring 174 points over the season that is 26.9 % of his points showing that our armband choice is one lion that needs to be tamed.

Big moves this week with several heavy hitters putting on a show but the question is do we go for the City double up or even the full three ring circus with Fulham up next?

Lateriser and the casual maverick Joe have already committed to the double and De Bruyne looks certain to gain more owners with the quality of circus he can provide but will anyone gamble on their other attacking options?

Hat-trick hero Mahrez, who has started seven out of the last eight should tempt a few, Sterling could turn your season upside clown and be a massive differential with only 4.5% ownership and then there is Aguero, we all know what he can do.

Let’s see which of The Great and The Good buy a ticket to what could be the greatest show on earth.

Anyway, that’s all from me for now and remember don’t have nightmares.

For those affected by any of the topics raised in the above article then you can find me on Twitter at https://twitter.com/Greyhead19

Double Gameweek 26 edges towards its conclusion, with two early-evening kick-offs at Craven Cottage and the Hawthorns preceding the clash between Liverpool and...
Read more
News

Our frisk of the fixtures sees us assess the Premier League clubs with the strongest and weakest runs of league matches over the...
Read more
News

Sponsored by FanTeamFanTeam are teaming up with Fantasy Football Scout to launch an exclusive free event for readers of this site.This Free Roll...
Read more
News

Double Gameweek 26 may not yet be over but the Scout Squad panel are already looking ahead to the weekend’s fixtures.This is the...
Read more
News

Currently sat at 694th in the world, Let’s Talk FPL’s Andy talks through some ideas for his own team and addresses some trending...
Read more
News