The Complete Guide to Scout’s tips and advice for Triple Gameweek 35 | fpl.wiki


Gameweek 35 of the 2020/21 season will be etched in our memories forevermore – the Fantasy Gods have thrust a mythical Triple Gameweek upon us.

The Premier League’s most successful side, Manchester United, will be playing three times. But the burning question is, with the Red Devils cramming their three fixtures into five days:

Do you let this Treble – which probably will be a Double for most of the players – completely destroy your plans and blinker you to the potential of the Double Gameweek players?

We have a Friday deadline of 18:30 BST to finalise our teams.

Here’s how the schedule currently looks 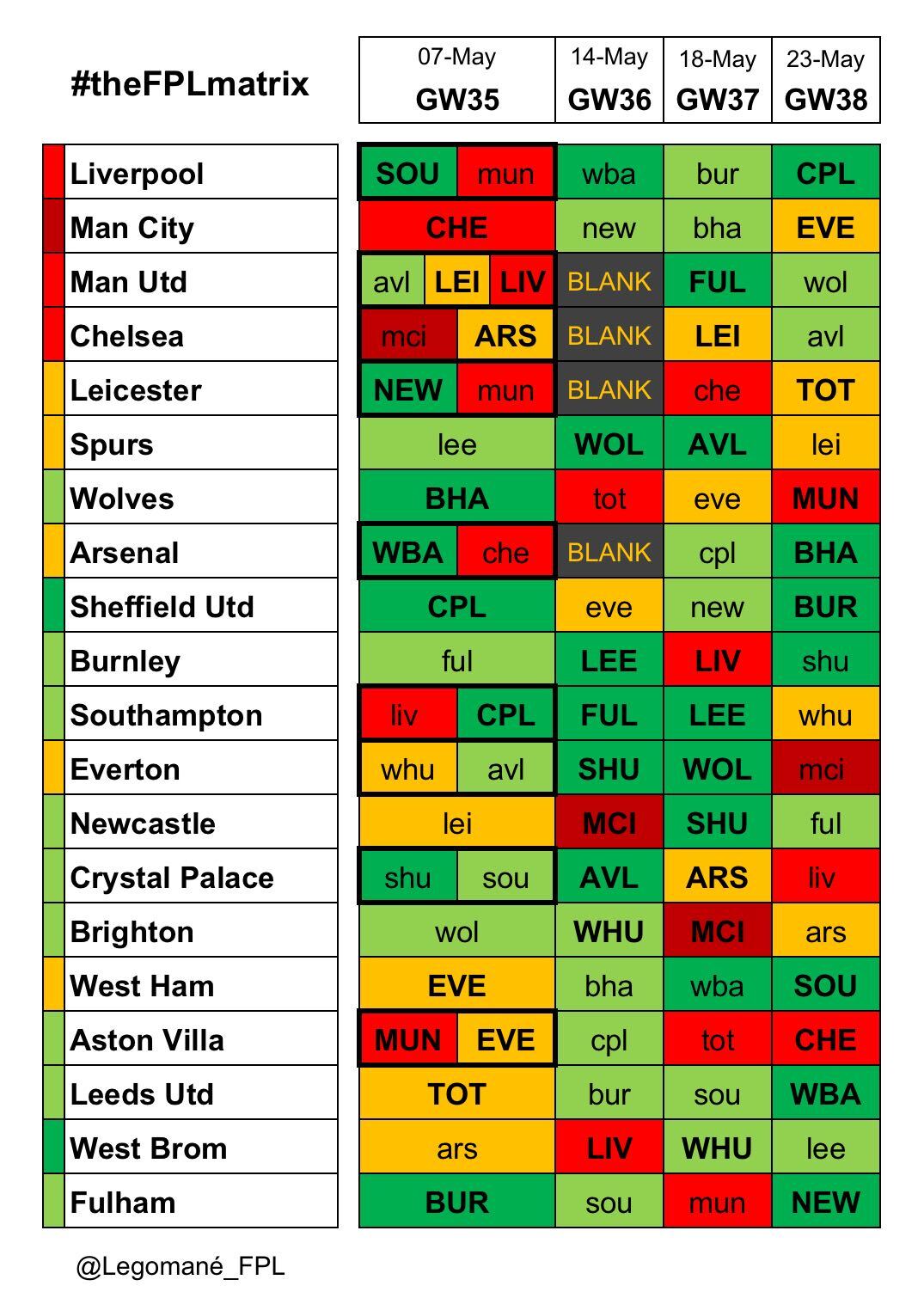 Notice that four teams blank in Gameweek 36, including Man United, while five teams play twice in this round of fixtures and also have a match next Gameweek: Liverpool, Southampton, Everton, Crystal Palace and Aston Villa – could these be the sides to target for those without a Free Hit chip or Wildcard?

Recovery times between matches is likely to have a big say in team selection, and arguably performance too. In the past, Pro Pundit Zophar has noted the impact on injuries:

Recent research has shown that muscle injury risk increases by almost 20% when recovery time is reduced from six to three days. It concluded that fixture congestion and insufficient recovery time between matches are two of the major risk factors associated with injuries and suggested that players should have at least 96 hours between matches in order to recover fully. Beyond the 96-hour period, there were no significant gains observed.

With a day’s rest between each of their three fixtures, caution is advised with Ole Gunnar Solskjær’s troops.

Although, as Neale observed, is the silver-lining of playing three matches in a week that there’s a greater chance of two or more starts for most of United’s key players, even allowing for a benching along the way?

It’s unlikely any of them play three times, the only thing I would say is you kind of guarantee two games for most of the main players whereas … Jota for example or or even Mané potentially – and I know not everyone’s really got him in their team right now but some people might be thinking about it – I don’t think anyone will guarantee two games for them whereas Bruno, Luke Shaw they’ll definitely play twice.

The other question to consider is how good are the fixtures for the 13-time Premier League champions?

And given their current position in the table, when they arguably only need three more points to secure Champions League football, how can we expect them to approach their fixture triplet?

They have, on the whole, been cautious when facing the ‘big six’ teams and Leicester City. Since the 6-1 defeat at Old Trafford to Tottenham Hotspur in early October, they’ve failed to score in six of their nine matches against this elite opposition (Man United’s score first):

I’m quite happy having no Bruno.

He outlined his reasons across a couple of videos:

Do you United need to risk it? They don’t need to beat Leicester and Liverpool do they? And they probably think they can get something out of Villa with a weakened team … Both Leicester and Liverpool need to get results, so they’re going to be tough games, I think … Even if physically some of the [Man United] players won’t have played three games in five days mentally, as a team, they’ve got to prepare for three games in five days. That’s going to take its toll.

In recent weeks we’d analysed a slump for Bruno Fernandes (£11.5m), and even questioned if he was a viable premium for our FPL squads.

But his underlying stats have improved, as Jan highlighted in his Captain Sensible article:

The Portuguese international has dominated underlying statistics among midfielders in recent weeks. No midfielder has registered a higher figure for expected Goal Involvement (xGI) over the last six matches.

Tom Freeman picked up on the stat, explaining that his expected goal involvement (xGI) delta stands at -1.73 over the last six Gameweeks – no midfielder has underachieved more in front of goal during that time.

For Jan, there’s only one captain option:

Even in the scenario where Fernandes only starts in two of those three games, he is comfortably the most likely player from Manchester United to provide big returns in Triple Gameweek 34 according to his underlying statistics.

And, despite having some reservations, Zophar feels that the first Triple Gameweek since 2005/06 is an opportunity that should not be passed up:

In five years’ time, I don’t want to be saying that I had only two players when Manchester United had a Triple Gameweek, irrespective of the outcome.

Harry Maguire (£5.5m) is widely considered to be the most-nailed of all United players, having failed to miss a single minute of Premier League football since moving to United at the start of 2019/20.

However, that run is likely to come to an end:

But there have been encouraging quotes from Bruno Fernandes, even if he’s unlikely to play all three, his words give hope to his backers:

Given the rotation we expect for Man United, could the real winners be Liverpool and Leicester?

Unlike many of the teams around them in the Premier League table, Liverpool have neither FA Cup, Europa League or Champions League involvement as a sideshow distraction. The sole focus is on securing a top-four finish in the Premier League, which would likely reduce the risk of rotation from now until Gameweek 38.

The risk with Liverpool’s attacking quartet is that, following a very open game against Newcastle, Klopp may be unwilling to start all four again. So we could see Diogo Jota (£7.0m), Mohamed Salah (£12.7m), Roberto Firmimo (£9.0m) and Sadio Mané (£11.7m) eat into each other’s game-time during the run-in.

Perhaps Trent Alexander-Arnold (£7.6m) could be a safer option, David even mooted him as an option for the armband on the Captaincy Video:

The assist potential of Alexander-Arnold was very high, so in the last six matches he’s created 16 chances … but also the quality of it as well, so he’s created four big chances.

Finally, Everton were tipped by Lateriser in his latest column piece:

I looked into the numbers and 46% of the big chances that they have created this season have fallen to him. Despite their perceived lack of form, only five teams have created more big chances than Everton in the last six matches (2.33 per game). It is also worth noting that Everton’s next four opponents conceded 2.45 big chances per game on average in their last six matches, which bodes well for Calvert-Lewin. He could have easily had a brace against Aston Villa in Gameweek 34, as well.

Elsewhere, Neale previewed finals of both the FFS Open Cup and FFS Members Cup, and RedLightning brought us his regular update on the community competitions.

The Head-to-Head fixtures for Gameweek 35 can be found below.

The scores and tables update every night on the Head-to-Head Leagues main page so you can keep track of the action as the Gameweek unfolds.

May your arrows be green!

Full-year memberships are now available for the price of £19.99. Monthly subscriptions also cost just £2.99. A FREE trial is now available during December.

Join now to get the following:

We’ve two more warm-up matches to bring you up to speed with as we continue to assess the form and fitness Fantasy Premier...
Read more
News

This season’s opening selection begins with a triple triple-up from Rangers, Hibernian and St.Johnstone.The Scout Picks will consist of 11 players only, but...
Read more
News

Fantasy Bundesliga is back for the 2021/22 season – and Fantasy Football Scout will be the place to come for tips and advice...
Read more
News

There was a bumper day of pre-season friendly action on Saturday, with 12 Premier League teams in action.We’ll have the goal, assist and...
Read more